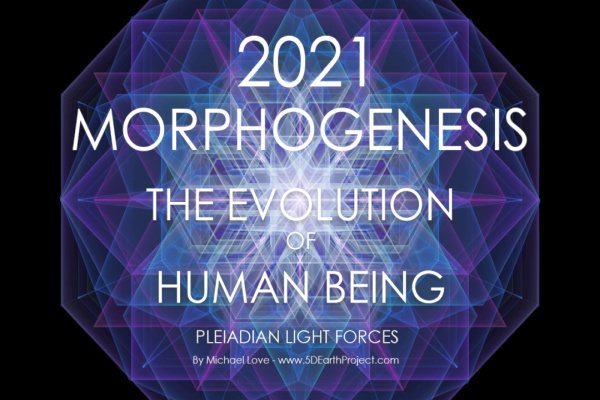 We present this special pleiadian discourse about DNA morphogenesis and the mechanics of earth’s ascension.

The Pleiadians have an ability to communicate universal information in a down-to-earth-way, designed and coded to trigger DNA and expand consciousness levels.

Great being, As you know, intense amounts of high vibrational light have been coming to the planet during earth year 2021.

Earth alliance intel shows this high vibrational light is not just coming in randomly but is being directed towards earth by intelligent and benevolent forces of light!

These fantastic light beings are here in our solar system for the grand purpose of assisting humanity in their imminent evolution.

The Pleiadians say when DNA is exposed to high-vibrational gamma light, the DNA is recoded and activated, near instantly!

It is important to know that one must be ready and able to take this type of light into the cells of the body for this DNA activation to occur.A being must resonate with the high-frequency vibration of this cosmic energy for it to enter in, and have an affect!

This powerful gamma light we speak of originates from the galactic core and when these higher dimensional energy waves make contact with earth’s sun, the sun reacts strongly producing heightened solar flares and cmes ejected from the corona.

These light beams coming from the middle of the galaxy are ionized photon-gamma light that activates and enhances the DNA of any living species to a higher order instantaneously!

This light can accomplish this because its particles contain more advanced DNA blueprints from higher realms that instantly recode earth DNA to a more perfected state.

How is this light received and held in the physical body and when we say DNA activation what do we mean?

We believe a better descriptive phrase might be, ‘DNA re-connection’ as the main 12 DNA strands in the physical container are re-coded by cosmic gamma light data, they naturally form a new geometric growth pathway and literally plug themselves back into one of the corresponding resonant 12 chakra portals or ports!

Chakras are non-physical energetic multi-dimensional portals in the layered body that form a gravitational grip onto the DNA strand and hold it in place!

Though there are 12 primary strands of DNA filaments, there are trillions and trillions of tiny crystalline gossemer threads called nades that carry this cosmic energy through the body where it is then decoded and perceived in magnificent ways by the being that inhabits the body!

Let’s go even deeper:What is going on at the sub-cellular-atomic level in your DNA when a geo-magnetic storm contacts your auric field?

The incoming beams of solar ionic gamma photon light particles being directed to us have the ability to cut through to the nucleus of the human atom, to shift its chemical bonds and change the very make-up of our atomic structure. This re-arrangement of our atomic structure is morphing our cells into a more complex crystalline structure that can literally allow all the data in the universe to begin flowing through the human body computer!

Humanity began as an advanced shining star race but human DNA was unplugged by nefarious beings about 350,000 years ago and humanity was enslaved and plunged into the dark with no information!No human had a clue that anything had even happened.

That’s how severe this body shutdown was!

The good news is, these DNA strands are being reactivated now, one by one, on a global scale!

You see, when human DNA was unplugged eons ago, the strands were left in place in the physical container and now it is literally reconnecting itself with the help of these divine beings and the light they are sending to match the human body’s original divine blueprint!

The great awakening of earth has started to advance forward now as star nations are directing huge amounts of photon light to the earth, activating all DNA in this cosmos and shining light on things that have once in the dark!

We are progressively mutating into the god-beings we truly are and this is a metamorphic process of solar empowered alchemy which is changing our atomic bodies from a carbon-based framework into a finely tuned silicon-crystal system.

This new crystal bio-computer or light body is able to translate the most advanced data in the universe instantly and is far more efficient then any quantum computer that was ever conceived!

These crystalline bodies are able to now interpret much higher levels of advanced information as we evolve our consciousness.

What is fueling this biological morphogenesis and the great awakening on planet earth?

It is due to the constant waves of super-charged plasma rays emanating to us from the very core of our milky way galaxy!

These rays have now entered the crystalline earth, discharging an ionizing type of radiation that neutralizes, cleans, recodes, energizes, transforms and rebuilds our DNA, allowing all living systems to expand and breathe more light!

The scientific definition of ‘ionizing radiation’ is “radiation composed of particles that individually carry enough kinetic energy to liberate an electron from an atom, therefore, ionizing it ”every time we receive these cosmic gamma rays into the physical body container, our entire genome is re-arranged, aligning with a more complex cosmic template.

When we say, ”these solar ionic particles have the ability to cut through to the nucleus of the human atom”, do you understand what this means?

It means there is billions of nuclear reactions happening in your body constantly as it re-configures itself into a more advanced structure!

This atomic reaction happening in the physical light-body-ship alters the ratio of the basic compounds of our elemental structure, thereby taking us into a much faster vibrational spin, and forever freeing us from the out-dated carbon-based atomic code!

We are going through a physiological emergence into a faster lighter vibrational densities and we are doing it, step by step, cell by cell this is a literal morphogenesis!

This is the evolution of humanity and the great ascension of planet earth!

The cosmic challenge of earth’s ascension is too take the physical body into the fifth dimension!

This ascension or morphogenesis is actually considered impossible by human physics because you cannot take a dense material physical object (your body) up into a faster vibrational non-physical realm! physical and non-physical are polar opposites and like mixing oil with water or putting a square peg in a round hole!

You can make it fit but some serious alterations have to happen for it to fit with no gaps!

You can mix oil and water for a nano second but again you have to do a bit of magic to make it really mix!

Great one,As you well know, awakening is not easy business and it can be a messy, even chaotic process!

When two out-of-sync dimensions such as 3d and 5d collide, as they are right now on the surface,An offset dimensional wave is produced that is not harmonic.

This is very natural to experience when one is ascending and once a being aligns more with one or more of the dimensions, the chaos subsides!

Indeed great transformation is occurring in our personal lives and all across planet earth right now, as everyone is trying to find their way!

We can tell you it is all going somewhere and it is going somewhere positive!It is known by higher beings in this cosmos that earth does evolve into a more beautiful, peaceful and advanced world.

The morphogenesis of your being is the toughest challenge you will every undertake, however as you become a master, you will begin to experience realities that are too amazing and beautiful for description!

All of the magnificent beings of this universe have come to this galaxy recently to grab a front row seat for this grand ‘morphogenesis’ you are doing and they want to see how you did it!

Many of them have even placed bets that it could not be done!We are betting that you have already surprised them with your magnificent achievements so far!

All eyes are on you and we are wondering what you will do next?

As powerful celestial light continues streaming into earth and the vibration elevates, know that all things are being transformed to a higher order on the surface of planet earth!The outcome is where you desire to go, and you truly are going to see what you’ve been looking for!

Keep vibrating high and keep choosing love in every moment!Thank you for volunteering to come to earth to assist humanity!

Let us know how you are doing taking in this light and how your ascension journey is progressing.

God-speed great beings of light,
Michael and the Pleiadians

We have 1259 guests and no members online