Message From Hatonn: The Tipping Of Mother Earth 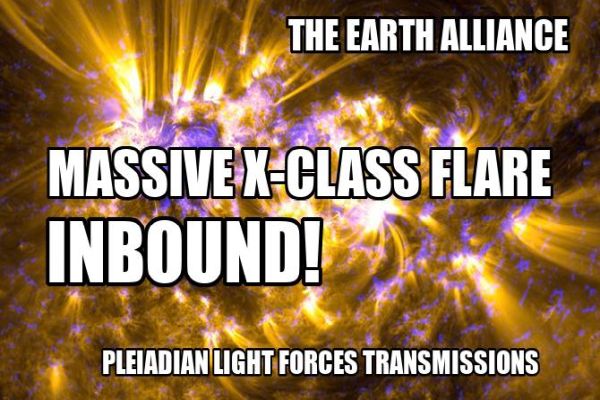 A Pleiadian Light Forces Space Weather Broadcast To The Starseeds Of Earth! *

As we head towards another super galactic weekend, the earth alliance has issued a critical space weather watch for Friday and Saturday of this weekend!

This morning the most powerful (full-halo) x-class solar flare of this cycle ejected from the sun’s corona and is inbound now at over 2.3 million mph!

Though the ultraviolet light wave from this flare was projected to be an x2.2 class, the actual power output was eclipsed by the solar disk and realistic projections show the flare to be an extreme class x.10!

The sunspot that produced this monster flare has now turned behind the sun, however a large part of the plasma wave produced from this monster blast will definitely impact planet earth!

The earth alliance projects a strong wave of fast-moving, exotic particles will reach the eastern seaboard of American first, on Friday evening.

A major tectonic watch will commence Friday afternoon and there are heightened risks of power grid disruptions.

This monster flare ejected a record level of coronal material towards earth and as earth-based space weather agencies receive more data, we will see something big is headed towards earth!

*The earth alliance assembles * light leaders from all around the world assembled for the second time this year in video meetings today to discuss earth’s escalating solar events.

What is so important?

Let’s just say there has been much chatter recently about the grand solar flash and about how easily a strong x flare could completely disable all 3d matrix electrical infrastructure. It is known by earth alliance leaders that a strong x-class solar flare is the trigger event that turns off the 3d matrix for good! This event leads to the unity of many global (conscious communities) that will form the new 5d earth!

When a strong type of solar event like this happens while earth’s magnetic shields are weak as they are now, electrical disruption and shutdowns are very possible across the entire planet.

“Every 13,000 years, earth experiences a major solar event and the previous 5 times this has occurred,

“5 shining human civilizations that existed on earth before the great flood with all their advanced technology, treasures and knowledge were almost completely eradicated from the planet by these 13,000-year solar cataclysm.” “Some say comets or asteroids caused these past 5 extinction level events on earth, however if one looks much deeper into ancient records and the akashic information for earth, it is known that all 5 past planetary extinction level events were triggered by a very intense flash of cosmic plasma that created a pole reversal.”

“While it is indeed a grand solar flash of light that creates this profound change on earth every 13,000 years, who knows the mystery of why it happens historically, in this cycle, right on time, like clockwork?” “We assure you it is all the natural workings of the cosmos, and another heavenly body is at work behind the scenes.”

“Years ago, earth’s pioneer 10 probe found a planet beyond Pluto orbiting around a dead star sun. The star or sun in this system emits no light but is 100 times more powerful than earth’s sun.”

This planet/star system is located about 50 billion miles out, in the ort cloud and is indeed the mysterious Planet X.

The orbit of this ‘planet and sun’ system approaches earth’s sun every 13,000 years, 1/2 of the equinox procession, right on schedule and when this cosmic system’s orbit arrives at perihelion with earth’s sun, it causes sun’s corona to build up a tremendous electromagnetic charge which will explode or flash to release the pressure of the particles.

We are at the end of the latest 13,000-year cycle of this planet/star system and the sixth major solar event in earth’s history is due now!

Many will ask, “if this type of solar event happens again, wont humanity be wiped out like they were in the past?” “What is different now?”

Do not dismay, as deeper knowledge is required:

The pleiadians say that it is known that “in earth year 2022, earth is currently in the time of the sixth sun which began in 2012 and when the grand solar flash occurs this time, humanity will not destroy, but will be instantly transmuted into the 5th dimension.

How is this possible?

“For the first time in human history, humanity, with the assistance of light forces, has enough knowledge and technology to prevent a planetary cataclysm from a pole shift caused by a major solar event.”

“For several earth years, light forces have been assisting the leaders of light of planet earth in developing an artificial magnetic field which will stop pole shift. The technology to do this is a special secret project that exists in antarctica, out of the public eye and involves tesla scalar wave technology.”

The future timeline of earth is completely known! It is a positive 5d gamma timeline where humanity ascends to 5d new earth and there can never be another planetary cataclysm of any kind!

When will all of this happen?

It could happen today!

It could happen tomorrow!

What we do know is everything in the cosmos points to right now as the time when ‘The event’ of a lifetime will occur!

It is time for it to happen again, now!

The grand solar flash is indeed imminent and at just the right moment when celestial bodies are in the right alignment, it shall occur in the twinkling of an eye!

Great one, we will keep you updated over the next 72 hours and know that all is well as the earth alliance and delta security forces are monitoring this situation closely!

Planetary ascension symptom reports are increasing this evening as the starseeds of earth prepare to integrate this high-vibrational light into their cells! As you know, when these fast-moving cosmic particles impact the auric field, it causes quite a jar to your layered body system!

To ease the effects of impact the pleiadians say, be sure to eat light energy foods and drink lots of pure water! You have to slow down and just take it easy when the light comes in hard like this! Be in nature to ground, meditate an hour, and keep those crystals nearby to channel the energy through your body and into the earth! As this high-vibrational light is integrated into your DNA 24 hours later, you will emerge as an entirely new creation and a literal brand new being where things are lighter, easier and more wonderful!

A major wave of light is headed towards earth now so brace for impact and standby for a super DNA upgrade! Take the best care of you during this amazing time!

We say, let there be light!

Let us know what ascension symptoms you may be experiencing at this time!