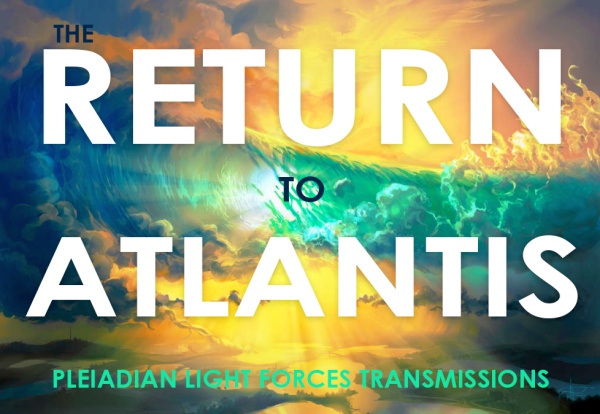 A special Pleiadian message to the star seeds of new earth, for immediate planetary broadcast… prelude: the data in this transmission is derived directly from channeled earth alliance intel and from the ancient mystery school knowledge passed down through the ages by the great white brotherhood.

The Pleiadians are the great storytellers of the universe and the information encoded into their stories are designed to trigger and activate dormant DNA strands, to the highest levels!

There is the story presented to humanity and there is the whole story.

Tonight, we will tell you the whole story!

Be open and allow the information presented in this special channeled DataStream to integrate into your being! If you do, we promise, life will become amazing, and every moment will be a grand experience for you.

Begin transmission… great one, since time memorial on planet earth, the astounding memories of our ancient time in great Atlantis and Lemuria have flooded throughout our consciousness.

There is an ancient part of your being that is fully aware of how magnificent it was (and still is) and we are here now to re-awaken these ancient memories and reacquaint you with this grand part of yourself!

The great recordkeepers the Rosicrucian’s, a great white brotherhood sect of priests and recordkeepers was solely dedicated to keeping and guarding the secret doctrine of Atlantis, down through the ages, so the ancient knowledge would not be lost! When one uncovers the secrets of Atlantis, it is quite astounding to say the least!

This knowledge was preserved for one purpose, for you to find it so you may use it at the end of your journey, now!

These ancient scrolls speak of a very real Atlantis that still exists today right before your eyes!

Ancient memories let’s use some Pleiadian logic here as we activate some DNA: you have memories of Atlantis, many of you very vivid ones! Many of you remember your very lives as a divine being, walking on earth in those days! There are memories of incredible, advanced technology you worked with in those days as well as memories of the monumental feats you achieved!

Some of the memories of the destruction of Atlantis 12,000 years ago are very traumatic for the star seeds on earth today because this event left a permanent scar in our being.

Do you remember what were you doing in those ancient days? You were doing ascension work just as you are now! In those days, we were attempting to do your ascension in a more technical way and right at the very moment it was supposed to happen, things went wrong and great atlantis went down in the sea!

Many star seeds have asked, “what am I really doing here on planet earth at this time and where am I trying to go?” the answer great one is this: you are trying to go home!

But where is home and how do I get back there?

You are indeed on earth right now, on a grand mission to return this world back to the paradise it once was, and this paradise is the very home you are seeking!

This paradise has many names.

It is not some legendary dream and your connection to it is very real because it is imprinted into your very soul!

Some very interesting things can be found in great white brotherhood scrolls about Atlantis.

Both Lemuria and Atlantis existed at the same time before the great deluge.

While every country on earth is intimately connected to either ancient Lemuria or Atlantis, let’s speak a moment about one area of the world that was right in the middle of it all!

Both of these shining earth civilizations had a primary city hub! Lemuria’s massive primary city was located on dry land that extended from California, up to Washington state, out to Hawaii and down to Australia!

Atlantis primary city was also gigantic and located on dry land that extended from America’s east coast, several thousand miles out into the Atlantic!

Both cultures built massive crystal seeding and mining operations and crystal production was the backbone and secret power behind both civilizations!

Both lemurian and Atlantean dimensional tunnels still exist today that extend from thousand of miles of both north American coasts.

These tunnels were solely used for transporting massive crystals to and from the crystal beds to the shining cities of ancient earth!

The story says Lemuria was mostly likely located off the west coast of America! The whole story says, California once extended as dry land all the way to Hawaii with no beaches or ocean in between and California, Washington Hawaii and Australia are indeed Lemuria!

Atlantis was originally connected directly to the land of the east coast of north America and this area is one of the most powerful energy vortexes in the world!

Let’s talk more about this: the Bermuda triangle: the Rosicrucian secret doctrine of Atlantis is literally over 12,000 years old and speaks of a very powerful crystal technology that existed in the time of great Atlantis! This technology was deployed to assist in the ascension of the Atlanteans, in those days.

This is Atlantis crystal vortex technology and was also used for time travel and teleportation and multidimensional travel.

This powerful crystal amplifier was turned on when it sank 12,000 years ago and was swallowed up by the Atlantic Ocean during the great deluge.

The whole story says, this powerful Atlantean ascension device still exists and is still running today in the deep ocean off the east coast of north America! This crystal device is emitting incredible scalar waves today which cause anomalies to occur in the space-time field.

The story says the Bermuda triangle is a small electromagnetic area called the devil’s triangle located from the southern tip of Florida to Puerto Rico up to Bermuda and back to Florida, where strange time-space anomalies occur.

The whole story says this energetic triangle is very real, but the area is actually hundreds of times larger and extends all the way down the east coast of north America from Canada to Florida and all the way out, across the Atlantic, to the west coast of Africa!

The area is charged with Atlantean scalar crystal energy and if one understands how to exist in and work with this energy, it can be quite beneficial!

So, what really happens when you’re inside this Atlantean portal?

First of all, before you can travel through this portal in an effective way you must overcome some challenges, specifically letting go of the fears! You must be ready and found worthy by universal vibrational requirements and tested if you will, to see if you may enter in! You will not be able pass the barrier of the Atlantean portal until you are ready!

So, you passed the test….

When you step into this Atlantean pyramid vortex you are travelling dimensionally for sure! A gateway from 4d to 5d! Here we go!

A firsthand account of being in a new world, from the Pleiadian ground crew: I am home! I have landed in an alien, but familiar world!

It took some sacrifice to get here! I had to let some big things go and I am starting fresh! It seems I have to start from the bottom again. No way! Ahh, I see, not really, it just appears that way at first!

It seems I have moved back in time around 40 years! I wonder why 40 years? Ahh, yes, I remember, that was my favorite time! Was that the old normal? It was a time when I could walk around and have some fun! A great time when music was amazing, I often fell in love, and I could play with my dreams! It seemed simpler then!

I have noticed after a few days now that inside this Atlantean portal I have been given more time! I have heard that in the higher realms, time passes this way!

This is amazing! It’s so energetic here, it’s very intense! I have to master this new vibration!

I see now this is only a tiny glimpse of something truly magnificent! I can feel something big is about to happen soon!

They said you can’t go back in time and do things over again, but it seems that I have indeed done just this! I have crossed dimensions and timelines! Time travel? Interesting!

How many times have I said, if I could just go back to when I was younger and start again? Oh boy, what would I do different, if I could!

I am going to create a new world! A world full of goodness for all! This is what I will do! This is my destiny!

DNA re-coding complete………… great one, our ancient selves are calling to us stronger than ever now! The ancient power of Atlantis still flows through the energy grids of planet earth and we the original children of Atlantis are still here, ready to finish what we started eons ago! It was written and foreseen that the children of the sun of Atlantis who are the star seeds of earth today, would rise again and restore great Atlantis to all its glory!

This very Atlantis is the new earth you are manifesting even now! You are indeed going home great one! You and all of your amazing and divine brothers and sisters are retuning home with you! When it is all said and done, you will all receive great honor for the incredible work you have done on earth! Just think about it all great one! Take a moment to really feel and know who and what you truly are! You are celestial royalty! It is all quite amazing!

Dear one, on this very earth day 12122021 a powerful energetic portal is open around the earth and tremendous high-vibrational energy is pouring into the planet!

An even strong energetic portal opens on 122120201 on the solstice.

The priests of Atlantis saw this specific stargate as the portal that leads to the next highest dimension! Use this energy and this magnificent time to make your personal return to Atlantis!

Earth alliance 1221 global mass meditation we invite you to unite with light beings from all across the earth on 12212021 for a major planetary liberation meditation! This focused collective conscious energy is changing things profoundly! Let’s change it some more!

Great love and God-speed, Michael and the Pleiadians