How the Conscious Universe Works

The Nature of Archangels 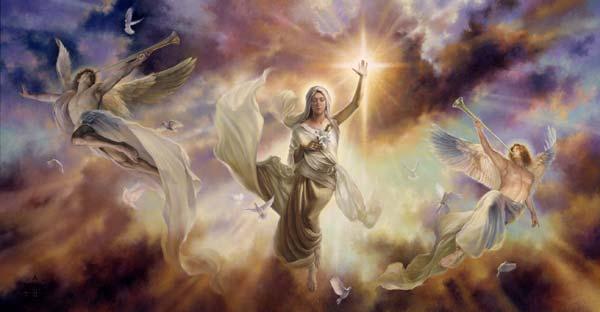 The Creator often sends additional help to us, the students of Classroom Earth, in our evolution towards spiritual growth. The most well-known example is Jesus, who was sent here to liberate humanity's heart from the suppressive, archaic order which existed at the time. By following the principles laid down by Jesus during his physical incarnation, people were given the key to the unfoldment of heart-centered consciousness. If more people had chosen to live in the spirit of his teachings, the world would be a far better place today.

Here we are, two thousand years later, standing on the doorstep of the cosmic event called The Shift. Even today, humanity is still learning to open up to the heart-centered consciousness which is a prerequisite for future incarnations upon this planet. Those who choose to delay their entry into heart-centered consciousness at this critical juncture will be accommodated elsewhere in God's universe for their future incarnations. Planet Earth, in her new frequency after The Shift, will no longer be a matching environment for the old level of self-serving consciousness.

Upon his physical death and ascension to the higher realms, Jesus resumed his natural, pre-incarnational state of archangelic existence. As the highest form of human existence, archangels exist in sixth density and fill that level of existence with their presence, along with the fifth-density soul realms, the fourth-density spirit realms, and the third-density physical world. Functionally, they are global spirits as their awareness encompasses all inhabited realms of the globe at all times.

You can communicate with archangels quite easily; there is no special protocol. You simply think of an archangel whose name holds a special connection for you - such as Michael the protector, Gabriel the messenger, or Raphael the healer. Or, you might choose Jesus, Buddha, or Krishna as these world teachers are, by necessity of their function, global archangelic intelligences.

Because of their all-present global reach, your thought will connect you to the archangel of your choice, who will then focus upon you to see if you need some form of spiritual help. That will intensify their presence and their focus upon you. Then, support, guidance, inspiration or healing will be dispensed as needed.

Sometimes, archangels produce a physical incarnation as an aspect of themselves. One example is the Archangel Michael who, in recent centuries, has taken on a role which could be described as a Lord of Freedom. At one point, he incarnated a portion of his consciousness as the now-legendary mystic Merlin who guided the young King Arthur to introduce a new mindset. Instead of the old dog-eat-dog order, with the toughest alpha dog in control of the pack, Merlin introduced a new idea of cooperative equality. As a result, humanity had an example that inspired its steady climb out of the suppression imposed by the rigid hierarchical control of the day.

The archangel Michael incarnated a portion of his consciousness again in the 1300s as a monk in France in order to take his new physical body through ascension. In his ascended physical state, he showed no sign of aging over several centuries. French historians later declared that he, in his role as the Count of Saint Germain, was alive for at least 500-600 years. One person at the royal court of France in the 1700s met him when she was a young teenager, then again when she was 70, and was aghast that St Germain had not aged noticeably.

Not limiting his efforts to one country, he also successfully served as the main inspiration behind the American Revolution of 1776, where America broke away from the control of Great Britain and became independent. Later, he told people that he would be away for some time in order to impress a man called George Stevenson about how to advance steam locomotives. Stevenson then produced the Stevenson's Rocket, which developed the design of steam locomotives to the point where railways could be built for general transportation, replacing the former system of horse-drawn canal barges.

In the late 1800's, he began focusing on the re-emergence of spirituality in the West by influencing what became the Theosophical movement. In the 1930s, his most memorable work was given through Godfre Ray King in the "I Am" series of books. Today, he works with spiritual groups in order to help inspire the new spirituality which is emerging as Earth transforms into a new level of consciousness.

As new thought movements flourished in the late 20th Century, the name St Germain became associated with teachings through many channels. At this point, a word of caution is in order. I have found in my observations since the 1960s that, sometimes, these channelings are not genuine. Time seems to sort out the good from the bad as the genuine material typically survives for decades while the fraudulent versions, filled with words that lack the ability to empower people, fade away from lack of attention.

Genuine St Germain material inspires people with new, uplifting concepts and includes a call to action. The other kind lacks inspiration but often includes statements that are confusing or which invoke some form of fear, interspersed with nice-sounding generalities, surprising predictions, and a liberal dose of flattery.

The flattery part expresses as a message that you are part of a very special and unique group, one which is somehow above all others. If, however, you ignore the flattery and listen with your intuitive sense, you will probably detect the energetic vortex that is designed to chain you into the orbit of a tightly-controlled group that will actually take you nowhere in the direction of spiritual freedom.

When you consciously keep a watchful eye for such obvious pointers, your natural ability of discernment will operate perfectly well and your intuitive sense will tell you all you need to know about whether a source of teaching is worth your time.

+ - Credit Click to collapse
Owen K Waters writes for the Spiritual Dynamics Academy website at SDA.AC
*If you enjoyed today's article, forward it to a friend! They will appreciate your thoughtfulness.
Courtesy of Owen Waters
CrystalWind.ca is free to access and use.
Please support us with a small gift of $11.11 or $22.22 or $33.33.

We have 1941 guests and no members online