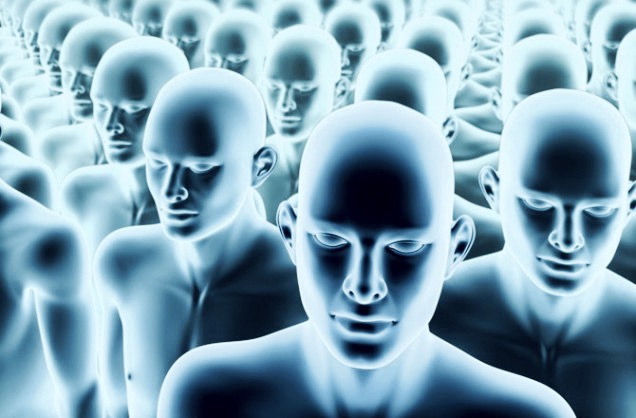 The human race has had our DNA manipulated, altered and split in two to change our entire species genetic make up. Clones are a genetic creation that run on a artificial program “AI" (Artificial intelligence).

Clones because of their genetically modified make up will suffer serious health conditions and neurological problems that eventually ends them, or cause their offspring to have those problems sooner destroying their reproduction to a limited number of generations, creating a dead end of that species. This is what I believe is happening to the Greys.

The high-level science of genetics on planet Earth meaning the Cabal government working in their underground labs or DUMBS are and have been doing some extremely highly advanced cloning of our race for thousands of years. This very sinister program Genetically modifies the human to work on a completely artificial frequency based solely on artificial intelligence. Very dangerous!

This Dark Cabal has been manufacturing clones of all sorts of people, politicians and celebrities, military anyone who can be useful to replace and fulfill the agenda they want. These clones are controlled by a central AI that works with a transmitter that receives information through a chip which is neurologically connected to their brain. This central AI controls these clones equally like as in a “Hive Mind” which I’ve talked about before.

These clones work through an AI signal. When the internal program in these clones do not give, let’s say, the correct answer or the desired reaction it can be accessed through that signal from a central AI computer. Although these clones do learn new things overtime from experiences but it’s of a very limited nature.

The signal that controls these clones is transmitted by the cell phone network and other high energy transmitters that are placed at key points around the world. The signal is accessed and controlled by a supercomputer called “Red Queen” which is located under the Denver airport. There are other independently node’s as they call them around the world but these subordinate node’s are always coordinated by the Red Queen or Central.

This AI of the Red Queen works independently, making its own decisions and acting without any control of a human being. This Red Queen has not only the clones under its control but also extremely high tech war robots manufactured mostly by DARPA and unmanned drone aircraft which is strongly armed. The Red Queen can also take control over any modern computerized vehicle such as a car, airplane, whether it’s military or civilian, ship or submarine.

These clones can be manufactured to be exactly the same as the original and can be modified according to their needs. These clones are not perfect and are plagued with problems. They can also make an artificial person that does not represent any real human and that creation is made with the manufacturer’s specifications according to their purpose and the task they will perform.

These clones are high-level people, leaders of large companies, celebrities, politicians. Some of these clones are used to carry out murders, suicide missions, and political coupes. When these clones are being harassed and suffering ridicule at the hands of an irate population usually the original has already had the opportunity to flee (Sounding familiar?) False flags and attacks on our schools, malls and public places are where clones are used.

Clones of children and babies are also being created on a large scale to be used in Satanic Ritual‘s to their Archon gods. Celebrities, men and women also are cloned equally and sold to the Elites as slaves and sex slaves. These clones vary widely in pricing according to the perfection. Many of these children are created and sold as sex toys to these Elites of the Cabal. Most of these clones are based on real people and they retain part of their personalities but they are downloaded with an extra program to make them more complacent.

These clones tend to have serious neurological problems again... Hi tle ry Cli nton? The longer the gestation period, meaning...the length of time given in their formation, the greater the total stability of the clones will be which increases its price. The cheaper ones will only work well for a couple weeks. These cheap clones are the ones used in suicide missions and are often disposable for a single use they have a very limited lifetime the most expensive clones are those that take 3 to 5 months to be formed.

The clones that are created for sexual slavery prices vary between $20,000 and $50,000 hence, rising in price according to specifications. The most expensive ones exceed a half million dollars. All are available only to the Elites and the public remains completely ignorant of this issue. Most of the public does have knowledge of cloning animals etc. but they are kept in the dark of how advanced this cloning process really is. They also make clones of real people for the purpose of organ transplants.

This is the scary part for an every day human.Today any person in the public can be abducted by the Cabal in a traditional kidnapping or by a high tech military ship in the service of the Cabal generally of the triangular type... either a TR-3A or a TR-3B. This is usually called an abduction of the MILAB type. If this person is of interest to them and being very influential to the masses they will be cloned and eventually replaced by their clone. In many cases only the people closest to that cloned person will realize something strange has happened to them.

So much of society is ignorant to the level of the cloning of the human race really is. This artificial creation of the human race is infiltrating all levels of society throughout the world. This invasion of artificial intelligence has a purpose for total planetary assimilation look what they’re trying to do to the human race as far as programming us to be obedient little robots it’s all for the purpose of control.

This invasion of AI is not of terrestrial origin and operates independently and does not need any operator or programmer, it has already achieved independence and the ability to be self-conscious, but lacks all empathy and is only interested in absolute power and control over all.

We’ve all heard of the implementation of the chip to every day human beings. They tell you it will make things easier and try to sell it as convenience but what few people don’t know is it’s all to control your consciousness and behavior. This chip will manipulate your emotions and behavior with a signal received through that chip by a cellular frequency which affects the brain. This signal or frequency can also send a secretion of psychotropic substances or nano bots into your bloodstream making you obey this external controller. Besides manipulating the behavior of a specific individual this signal can send a frequency to cause a disease, such as cancer and even death. Refuse the chip at all costs!

Modern smart phones are also being used for the purpose of the manipulation of behavior in the population, by emitting specific frequencies that match the brain waves of those within the radius of that frequency being sent. It causes changes to your behavior, moods and neurological problems such as epilepsies and seizures. Keep them away from you as much is you can. Believe me that’s easier said than done!

Specific frequencies are designed to affect the cerebral cortex in our brains. This technology is already being used on a large scale transmitted from the Gwen towers. This technology is also being used on the battlefield. This use of weaponized frequency can modify the behavior of the enemy. It causes feelings of terror and it implants ideas that they will take on as their own, it also causes them to feel doubt.

Keep your frequency as high as possible to keep these negative events caused by negative frequencies from altering your experiences. These Elites want to alter your Consciousness through frequency so by keeping a high vibration, a high state of awareness is your best bet.

We have 1567 guests and no members online