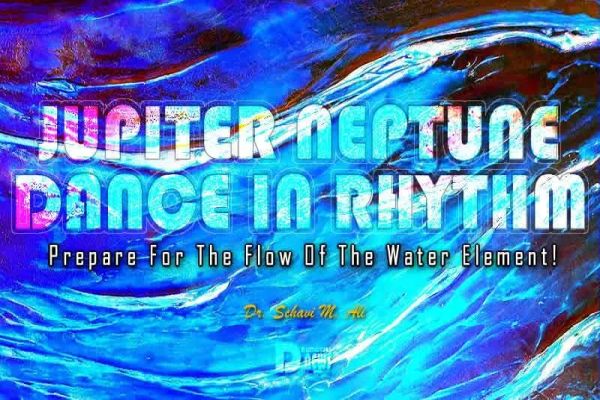 Both Jupiter and Neptune are in the water element sign of “Pisces”, both having moved into this sign at different times.

However, On Tuesday, April 12th, 2022, Jupiter and Neptune will make an exact conjunction at 23 degrees of “Pisces”.

With these planets in watery rhythmic attunement on April 12th, spiritual elevation will be the focus, and therefore, opportunities will arise for individual and collective greater connections to SOURCE FREQUENCY for HEALING and HIGHER KNOWLEDGE acquisition.

However, without stability and “groundedness” based upon a harmonious consciousness-transfer, Jupiter can create pushing forward without consulting the HIGHER SELF (SOURCE) first, and Neptune can create illusions and delusions.

Therefore, on the day of the exact alignment of these two outer planets, it will be very important to pray, meditate, and envision desires for PEACE, LOVE, HEALING, and ABUNDANCE on our planet as well as for ourselves.

We can also write out our desires and place it in a treasured holy text for retrieval at later times as a reminder.

The conjunction will occur at 10:42 AM (Eastern Daylight Savings Time).

The heightened energetics produced by this planetary dance conjunction will last for quite some time because the last time that it occurred in “Pisces” was in 1856—166 years ago on March 17th!

Review the history of that year.

Just a few of the events were:

Again, these are just a mere few of the major events of 1856. There were, of course, many, many others—some good and some not good.

If we consider the ancient teaching that “The Spirit moves upon the face of the waters”, we can glean an understanding of how it is our most vital element as it flows throughout us giving hydration and oxygenation as well as attunement to the “Ethereal Sea” of SOURCE.

Let us look for a moment at the importance of water.

It flushes waste from the physical vessel, regulates body temperature, assists with brain function, protects our tissues and joints, aids digestion, helps nutrients to be properly absorbed, helps with weight loss, improves oxygenation and circulation, boosts energy, improves mood, keeps the skin moist and bright, prevents kidney failure, and helps cells to maintain their healthy structure; and water has much more to offer.

When water is contaminated, however, it obviously does not give us health, but rather, it causes filth and germs to proliferate. Disease can occur.

Metaphysically, when someone is filled with disharmony, the waters of the physical vessel become contaminated, and “Spirit” cannot properly flow.

The focus of the lowered consciousness becomes anger, greed, hatred, envy, warmongering, trying to control Nature, and other evils.

LIGHT does not easily flow through a contaminated vessel, and thus, DNA and cellular records remain impacted with the dust and filth of a misused free will.

On the other hand, a HIGHER CONSCIOUSNESS allows the waters of the physical vessel to thrive and for “Prana” (“Life Force”) to be enhanced.

Always bless the water that you drink, cook with, and bathe or shower in by extending your hands (palms up) over it and reciting a prayer from your specific path.

Some people also place rose petals and crystals in it.

With Jupiter and Neptune in exact conjunction, there can be a literal rise in the waters of our planet Earth/Gaia to such an extent that floods can happen, and in some places, overwhelming tsunamis or hurricanes can occur.

There can be torrential rains and thunderous electromagnetism.

The frequency and amplitude of the planet can toss, turn, and heave as tectonic plates surge into quake mode.

How humanity chooses to use its power of consciousness will attest to how the waters—both spiritual and material—flow.

If the major percentage of our planet were comprised of people of HIGHER CONSCIOUSNESS, April 12th would be a “DAY OF ATTUNEMENT TO THE SUPERNAL WATERS”.

Businesses and schools would be closed.

Ceremonies near lakes, rivers, and ponds would be performed for not just the elevation of humanity but also for the healing of the literal waters of our planet.

Remember, our planet is mostly water.

On April 12th, the following is a ceremony that can be conducted outside near water (weather permitting).

If the temperature is too cold on that date where you are, then you will exit your vehicle briefly for a part of the ceremony and then complete it inside of it.

If you are lucky enough to have a warm sunny day, the total ceremony can be conducted outside.

The COSMIC HOLY BOOK is a blueprint of possibilities.

It is a message-giver of potential experiences based upon how we actualize individual and collective consciousness.

Thus, we are not to worship the planets and stars. We worship only SOURCE—the author of the cosmos who has numerous characteristics and attributes. “IT” sends us help from the “LIGHTED BEINGS” also known as “SHINING ONES” (“Devas” and “Devis”) and from DIVINE FORCES OF NATURE (“Neteru”)—all of which exist as ethereal atomic frequencies which take form as necessary.

Angelic beings reside within and upon the waters. After all, water is a “Force of Nature”— it is one of the NETERU—a word from which the words “Nature” and “Nurture” are derived. The water inside of us has potential angelic frequencies when properly activated with HIGHER CONSCIOUSNESS.

Honor the “chapter” from the COSMIC HOLY BOOK of Jupiter and Neptune’s conjunction on April 12th.

Prepare for this auspicious day beforehand.

Make it a special holy day. You are worthy of this.

April is going to be a very dynamic month.

The New Moon is April 1st.

A solar eclipse is on April 30th.

Become more conscious of the waters of your physical vessel and of our planet.

Think about it—you have been walking with ANGELS all the while because you are a “light” of SOURCE LIGHT.

You should acknowledge what has been placed inside of you.

Victory to the waters of SOURCE!