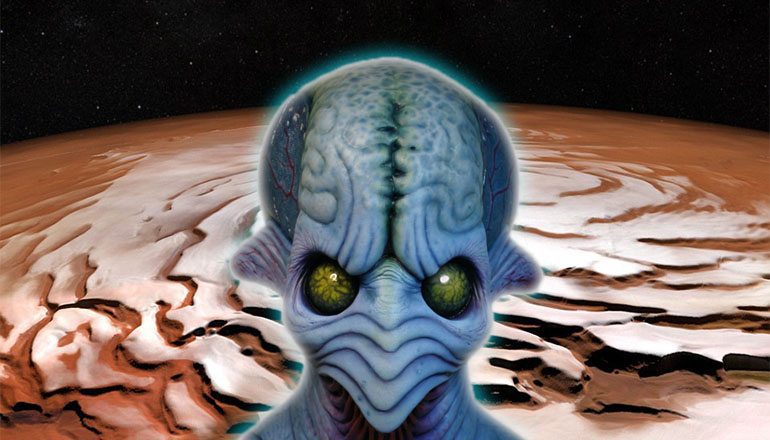 This will be the weirdest thing you read all day.

In the 1970s and 80s, the CIA and other government agencies experimented with paranormal research and one of their main focus was remote viewing.

Also known as clairvoyant travel, this unexplained ability lets users travel outside their bodies to perceive people and places through psychic means.One of the least secret programs making use of psychic abilities is the Stargate Project, a collection of weird experiments centered on remote viewing. The only thing stranger than these experiments is the results and answers they gave.

One such experiment is described in a declassified 8 page document made available by the CIA on their Electronic Reading Room. [Documents available here.]

The document exposes the results of a remote viewing session that took place in 1984. An unnamed subject with above average psychic abilities was taken to a secret location and given a sealed envelope. Over the course of one hour, the subject was interviewed while the envelope remained sealed.He had no idea what the envelope contained but was asked to travel to the time and place written down on a card inside the envelope. These were the coordinates:

Remember, the test subject had no idea what the envelope contained. He was asked to focus his ability on that particular time and place and was given different geographical coordinates as the interview went along. These coordinates could have very well pointed to a place on Earth, the Moon or any other astral body where cardinal points (north, south) are relevant notions.

Yet he nailed it big time.

Interviewers told the subject to travel to 40.89 degrees north, 9.55 degrees west. Here’s what he said he saw:

“I kind of got an oblique view of a pyramid or pyramid form. It’s very high, it’s kind of sitting in a…large depressed area. It’s yellowish, ah…okra colored.”

This description doesn’t stand out in particular, at least not before we input the coordinates into Google Mars. 40º 89′ N, 9º 55′ W leads us to the Cydonia region, home of the famous Face on Mars. 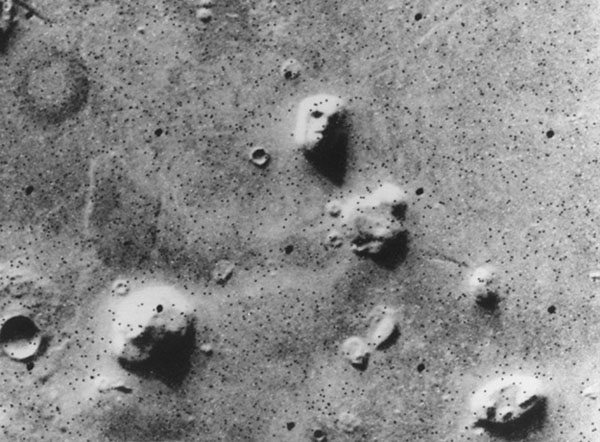 The interviewers pressed the subject for details regarding the situation in that particular area 1 million years ago. The remote viewer focused and what he saw paints a dire picture:

He was then asked to go back in time before that particular cataclysm had occurred and describe what he could see.

The interviewer then asked whether he could see any signs of intelligent activity and the psychic’s response probably blew their minds. On the other hand, the CIA were probably expecting to hear something like this. Why would they attempt to lift the veil of time if they didn’t suspect otherworldly beings had built strange structures on Mars? In any case, here’s what the remote viewer told them:

“I’m seeing ah… It’s like a perception of a shadow of people, very tall… thin, it’s only a shadow. It’s as if they were there and they’re not, not there anymore.”

It would seem that by 1 Million B.C., the ancient martians had already perished, leaving behind a faint glow of a presence. So the researchers asked the subject to go back even further, to a time when these giant, slim beings were still alive and kicking.

“I just keep seeing very large people. They appear thin and tall, but they’re very large. they’re wearing some kind of strange clothes. […] it’s like a really light silk, but it’s not a flowing type of clothing, it’s like cut to fit.”

Intrigued by what he revealed, the interviewers gave the man another set of coordinates and he described the scenery as “the inside of a cavern, more like a canyon. I’m looking up the sides of a steep wall that seems to go on forever. And there’s a structure with a… it’s like the wall of the canyon itself has been carved. Again I’m getting very large structures with no intricacies, just huge sections of smooth stone.”

He then described huge rooms that made him feel like the ceilings were very high and the walls very wide. But the most surprising aspect pertaining to this part of the interview was the interviewer’s reply:

YES, THAT WOULD BE CORRECT.”

Judging by this reaction alone, we can infer that the CIA knew about the alien structures on Mars before this interview was attempted. If this is true, they were prodding the remote viewer for answers that would confirm what they already knew. Perhaps they wanted to know the accuracy of a remote viewer’s sightseeing abilities.

In any case, he described more structures that couldn’t have been natural in origin: roads and aqueducts, clusters of very white squares reflecting light and radiating energy, more pyramids with vast interiors and even a monolith.

Inside one of the pyramids he even encountered some of the tall beings, holding onto hope for rescue while in deep hibernation. His description of the giants in stasis chambers is a bit poetic even:

“They’re very philosophic about it,” he added. “They’re looking for a way to survive and they just can’t. They can’t seem to find their way out so they’re hanging on while they look or wait for something to return or come up with an answer.”

“What is it they’re waiting for?” one of the interviewers asked.

“They’re ah… evidently there was a group or a party of them that went to find a new place to live. It’s like I’m getting all kinds of overwhelming input of the… corruption of their environment. It’s failing very rapidly and this group went somewhere to find another place to live.”

So if one million years ago the ancient martians had the technology to travel to a place far away in search of a new home, it’s safe to assume their technology was far superior to our own. This brings up two questions that really need answers:

I wish I could answer the second question. Maybe the answer’s yes. Look deep inside you. Do you feel martian blood coursing through your veins? Then it’s a yes.

The psychic described the place where the martian colonists eventually landed as “a really crazy place with volcanoes and gas pockets and strange plants. A very volatile place, it’s like going from the frying pan into the fire. Difference is there seems to be a lot of vegetation where the other place did not have it.” So it could be Earth, in the distant past this place was crazy. We have and have had volcanoes and gas pockets and lush vegetation. For now, at least.

As for the first question, the psychic was able to offer the vague depiction of a cosmic event that could mean a comet/asteroid impact or even Mars passing through the tail of a comet and becoming poisoned with its ejecta:

“I get a globe… it’s like a globe that goes through a comet’s tail or… it’s through a river or something, but it’s all very cosmic. It’s like space pictures.”

If we’re to trust the words of this unnamed remote viewer, the history of our own species becomes intertwined with that of a more ancient and civilized race. Or maybe they never came in contact with mankind as the catastrophe that wiped them out could have happened before Homo sapiens was a thing.

In any case, such revelations should change our perceptions about our place in the world, the cosmos and the grand scheme of things, if there even is such a thing.

So should we trust what this guy was saying? I don’t know, but if the CIA trusted a whole bunch of them and spent millions of dollars trying to squeeze information out of their minds, there must be something to the phenomenon of remote viewing.

The Stargate Project officially ended in 1994 but, come on, who would scrap a program that essentially allows you to take advantage of spies that can pass through the barriers of time and space? Can you imagine the type of esoteric knowledge gathered through such ventures?

Alas, we may never know what went on behind closed doors, closely guarded by CIA agents. But the depiction of ancient martians divided into two groups, one destined to die while hoping for salvation, the other in the dangerous search of a new home has to strike a sensitive chord.

Does this story mirror our own future? Will the corruption of our own environment lead us on a similar path to oblivion? In the distant future, will psychic aliens puzzle over our enigmatic demise like we do over the disappearance of the ancient giant martians?

A Message From Mira Of The Pleiadian High Council - December, 2020

New Truths ~ Teachings of the Masters

How to Motivate Yourself to Achieve and Enjoy Your Work
Become a Patron!

We have 1250 guests and no members online