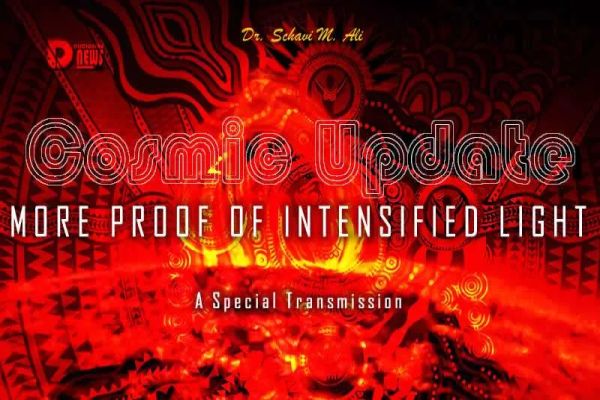 Many people now know from studies about the cosmic realm that the galaxy in which we reside—the “Milky Way”—sits at approximately 28 degrees of “SAGITTARIUS A”—a black hole created by a super-nova or exploding star long, long ago.

Huge clouds surround this black hole which are about 500 light years across in size.

These clouds have been being bombarded every ten days with cosmic gamma rays.

However, since 2004, it has been noted that these cosmic gamma rays are coming once each day, and the increase began after a mysterious object approached “SAGITTARIUS A” that was labeled “G2”.

Dr. Felix Aharonian has conducted extensive research on this phenomenon.

He is associated with scientific laboratories in Heidelberg, Germany and Dublin, Ireland.

Gamma rays are a penetrating form of electromagnetic radiation arising from the decay of atomic nuclei.

Thus, the super-nova or black hole at “SAGITTARIUS A” is an example of this.

Like a vacuum cleaner, black holes typically suck-up whatever comes near them.

Even though according to the subject known as “Particle Physics,” gamma rays are usually neutral—not weak or strong—they still have very powerful energy with a short wavelength.

Therefore, even in their supposed “neutrality,” there is power.

Thus, the term “neutral” is not sufficient to describe their force.

On October 9, 2022, the “Fermi Gamma Ray Space Telescope” governed by NASA detected a tremendous burst of gamma rays coming from the black hole situated at the constellation “SAGITTARIUS A” that were the brightest ever seen supposedly in modern times, and the explosion was labeled “GRB221009A”.

It takes millions and in most cases billions of years for LIGHT from super-novas to reach our planet.

The LIGHT from “GRB221009A” has been estimated to have taken 1.9 billion years to reach our planet in its exit out.

With LIGHT being detected bursting from this super-nova every ten days since it has been studied a long while ago but now coming every day since 2004, this suggests that we are indeed experiencing intensified LIGHT in this era.

Along with an increase in solar flares and coronal mass ejections of electron and proton particle plasma from our Sun, creation—which includes humanity— is being astoundingly transformed more than is realized because many eons ago we were informed via Divine revelation that LIGHT carries encoded messages and transforming power.

The world’s scriptures speak of SOURCE (in “ITS” many names) as being LOVE and LIGHT.

Therefore, the LIGHT coming into our planetary realm by various cosmic events is an aspect of SOURCE—the DIVINE INFINITE PRESENCE.

Creation is receiving massive doses of LIGHT, and thus, we are being engulfed with tremendous doses of SOURCE FREQUENCY.

As has been continually mentioned, there is a clearing, cleansing, and illumination (CCI) process occurring within us—within our cellular memory and DNA.

The lowering of consciousness that has disrupted recognition of our being originally forms of LIGHT, and thus, aspects of SOURCE, is being corrected.

The caveat, however, is that now, because of the misuse of free will, transforming back into LIGHT is coming with physical, mental, and emotional discomfort that becomes, however, easier for those who understand, respect, and align with the process.

We now have a choice of being greater LIGHT again or not. We can be spiritually empowered or not.

We can easily receive Divine revelation as ancient “Rishis” (“Sages”) did or not.

We can connect with our HIGHER SELF, i.e., our SOUL or not.

We can soar to super-consciousness or not.

Please concentrate on this message and then meditate.

Journal about what you receive.

This is obviously the case with the “Fermi” telescope.

Hopefully, mankind will use technology wisely—not to rival SOURCE and not to attempt to control certain “Divine Forces of Nature,” for to do so is to tamper with destruction—not re-construction of our LIGHT “beings.”

As great amounts of LIGHT are sent to our planet, our solar system, our galaxy, and into us, let us be grateful—like the biblical story of the prodigal son—that we are being welcomed back to our original DIVINE DESIGN.

As we receive more LIGHT, we will elevate to HIGHER AWARENESS and be instructed by the HIGHER SELF.