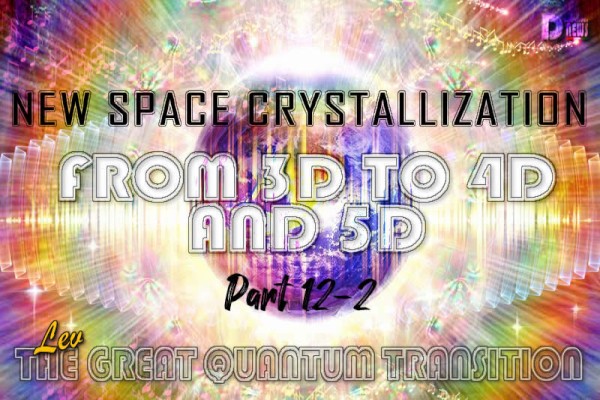 On Subtle Plane, the crystallization of four-dimensional space (transiting from 3D to 5D) looks like Lego construction of ready-made plasma cubes.

The cubes are placing on top of each other in all coordinates. It turns out a complex openwork building.

Its smallest cell is a cube. And each next one unfolds from the space of a neighboring one.

The structure rotates, and each cube rotates counter-directionally to the one from which it materialized. The rays coming from the corners cross, and intersect, sparkle – a new crystal is born to work with a six-dimensional external space.

Crystallization of 4D is going on at a high-speed up. Right now, a new structure of six vectors of possibilities, eight nodes of interactions, and twelve facets of transitions is growing in Earth’s space.

Activation of the fourth dimension began on January 27, 2017. By this point, numerous cleansings, harmonization of space, everything possible and necessary were done.

The new space is already available for those who are willing to interact with it.

We are all in it. More precisely, – those of us who are ready.

It is the 4D space itself that determines our readiness, not someone from the outside.

Today’s events, the absurdity of the decisions made by governments around the world, the search for clues, and hooks are indicators of panic and desperation on the part of those in power.

We must not be afraid. Those who recently owned the Earth are already removed from the planet.

Destructive processes will partially affect only those who feed them with attention and negativity.

The new 4D space is not set up solely for the collective consciousness. Everyone has value, and everyone can work with it. Such is the plan of Co-Creators.

Engaged with those who are already ready, the new space becomes a “magic wand” for all. It helps pull up the bottoms, who are under influencing, fearful, bogged down, and intimidated.

On Earth, the vibrational background was low, and the limit was 3D. Many couldn’t go higher than that.

This understated level affected everything, including the limited options and high density of matter. That is why it was so hard to bring materialization to the physical level from the Subtle Plane.

The sweeps were severe. Light Hierarchs had to descend into places where few dared to go of their free will before.

They tried to minimize the number of those who may be affected by the overall vibration rise and the processes that are now taking place.

Co-Creators cleansed the space several times, taking into account the information coming from Earth. They took note of the distortions in the transmission of info, applying a particular algorithm to recognize them.

For security reasons, the new 4D space activator was delivered on Earth secretly. Archons and Darkis waited for it at the North Pole, but activation was in a completely different location.

What is happening now is the result of an elaborate operation that Higher Light Hierarchs conducted, bypassing all the traps and obstacles of Archons and Dark Forces.

When activation would happen was aware, but no one could know exactly how or where. Yes, the reference point was the North Pole but hidden there was useless without activation.

The activation signaled the final breaking of all ties between earthly Darkies and Earth’s alien Masters.

The activator is the archive in which the foundations of the new 5D space are placing. It is scattered now throughout the space timelines.

It began to unfold as 4D, to read the environment, and to root in it.

This process removes major viruses and bugs, anything that 3D Matrix can create glitches with as the crystals and the pattern hidden in the North Pole activate.

Due to these erasures, there is a feeling of acceleration of processes – everything that inhibits them is removing. What is hidden in the Polar glaciers can be compared to a base in which an activator-archive will be open as the crystals started to work.

When the activator and the base come into interaction, the most intriguing part will begin. Creation on a higher level will be possible for all of us who are ready. It won’t take much time.

Collective consciousness is an obsolete model. Its frequent use has given instruments of control over it. They are in the hands of those who have absolutely no interest in change. Nor should we forget the statics of collective formations.

The new 4D/5D space is designed primarily for other models (which will become apparent as it unfolds): strong, active men and small groups.

The most important condition is the readiness of each of us, our pure intentions, which have no place for greed, meanness, desire for power, and other negative manifestations.

We don’t have to be in a collective to interact with a new space. The main thing is to be free of the things mentioned above.

The new 4D/5D space and the ability to interact with it are, in themselves, indicators that we haven’t such manifestations or they never existed in us.

It shows how ready we are to move on. And if the new space is open for us, if we feel it, then we can interact with it. The example of others is a great incentive for anyone who wants to develop.

Higher Light Hierarchs have also provided for the possibility of associations with like-minded people using the Subtle Plane.

If desires and intentions coincide, 4D/5D space itself will unite us on the Subtle Plane and help us find each other.

The rest is optional. It is not necessary to be in one group all the time. Participants can join other interest groups. Everything will be much easier than it is now, not so complicated.

The most active phase of the deployment of the new space can begin only after a wake-up of the critical mass of the population.

How close are we to that?

Very close. No one sets a time frame. When people begin to actively understand the absurdity of what is happening on the planet, it will be the first awakening call.

There will be no revolutions, wars, or violent takeovers. The System will lose power, deprived of its nourishment. Its rulers now are entrenched and trying to change or invent something, to call on someone to help, but all in vain.

The new space, like any crystal, needs a nurturing environment. It is difficult to deploy this environment in technogeeks cities, but the seeds are sowed all over the planet.

Not only is the climate cleaner at the poles, but there is also more energy. The ice caps are an ideal shelter for new space. Until the time was ripe, they suppressed its signals for camouflage.

There are emitters, the crystals that are now unfolding new 4D/5D space. This process is synchronizing with the rhythms of the planet. It is cyclical, epochal.

The ice concealed the locations in which it all was placing. The melting of the ice is also a cyclical phenomenon.

Each civilization has a couple hundred or a couple thousand years to reach a certain level.

When a civilization is seeded, these emitters are placed at nodal points on the planet and will hold the new space in the future. Some of them are under protective energy shields.

It is a whole set of crystal structures enclosed in sarcophagi. Each is a multi-layered pie of energies that contain the radiation for the time being like wrappers around a candy bar.

At the key moments, the unwrapping of the wrappers begins. The energy of its carrier spills outward. The planet’s crystals awaken and unite into a single network. Melting ice is part of this process. Ice is one of the wrappers.

Today, Dark Forces are trying to put together all the primal elements of space in its purest form that are currently available on Earth, for to:

The most curious thing is that they don’t know what it will bring to them. There are no more supervisors who guided them. Now the guiders have gone over to the Light Side or have been eliminated. So there is a disorder in the rulers’ ranks.

They know that a complete unfolding of the new space is inevitable. But if somehow prevent it, there is still a chance to rest at power for a couple of decades.

For this purpose, Dark Forces are trying in the Polar Regions to open a Portal to the lower energy layers and flood them with low-frequency flux. At the same time, they are looking for suitable shelters for themselves, as they fear a planetary catastrophe and see where they can move to if anything.

All this is a misperception of the new 4D/5D space and the timing of its launch. The activation had already happened. It was the signal to close the alien communication, after which the twitching of the governments began.

There are constant attempts to redistribute zones of influence the old-fashioned way, but this is outdated technology. Even the opposing Dark clans had to cooperate.

They know they won’t survive otherwise. Having end-time prophecies, they trust them too much.

Only the end does not mean a dead end. For some, it is a reboot. To others, it is a rollback, and for the majority, it is a transition to a new space and state.

Everyone will get according to the levels of consciousness. Therefore, there is no need for a full-fledged purge of the critical mass. There will be a development and awareness for each.

High vibrational 4D/5D space is not isolated. It is already woven into, infused into, and inscribed into the entire environment, so its manifestations will differ. Which group we end up in depends only on us.