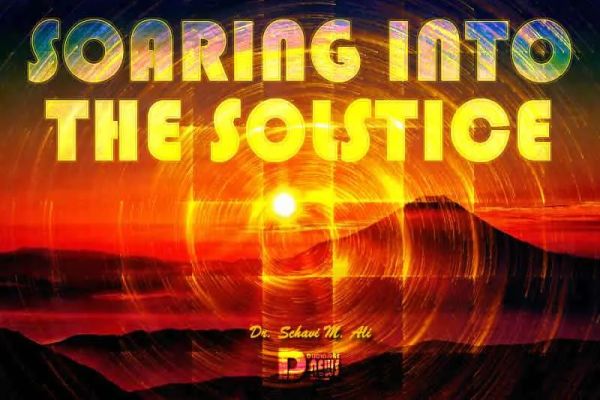 As Earth/Gaia heads into the Summer and Winter solstices on Tuesday, June 21st, 2022 (arriving at 5:14 AM Eastern Daylight Time), our Sun is sending powerful wind currents at almost 600 km/s (kilometers per second), and a huge plasma filament is surging back and forth that is as long as the distance between our planet and the Moon.

These filaments usually thrash back and forth and finally slam onto the Sun’s surface and then explode sending out its strong plasma throughout the solar system and into our planet’s magnetosphere often activating quakes and storms.

The magnetosphere is currently, as it has been for several days, surrounded by plasma particles that are pressing-in all around our planet.

The “KP Index” could soon be rated at “Storm” level from its current “Elevated” status. Sunspots have a beta-gamma field for strong “M-Class” flares and are now bursting with medium-strength “C-Class” flares.

As our planet prepares to welcome the solstices, its inner and outer fields are being activated as well as the physical, mental, and emotional settings of the human collective.

We must remember that our planet is turning and wobbling on its axis as it journeys through the “Photon Belt” and as it also receives energy from our Sun and the Great Central Sun—both of which further activate particular energetics of the other planets in our solar system.

All that is residing on Earth/Gaia is also receiving the same energetics as our planet “Herself”. We and our planet experience LIGHT AND SOUND TRANSMISSION AND RECEPTION— “As above, so below; as below, so above”.

Humanity will gradually become more acclimated to the increasingly higher cosmic frequencies which can be challenging as the acclimation process proceeds.

Fatigue, dizziness, intestinal purging’s, headaches, lack of sufficient sleep, anxiety, heart palpitations—are all being reported by many all around the globe more often.

An energy shift is occurring that is affecting the collective physical vessels, emotions, and consciousness.

The movement of energy throughout humanity is uncomfortable, but it is a necessary part of being upgraded and capable of the reception of HIGHER KNOWLEDGE.

It requires lots of self-nurturing with the spiritual and naturopathic suggestions that have been offered in many previous written discourses.

All is well, regardless of the discomfort that is experienced.

SOURCE LIGHT is healing and protecting.

“IT” is performing the “Shift of the Ages”. On some days, many people will feel very energized and grounded and will have slept well during the night, while others will feel opposite reactions.

Then on other days, those who were feeling fine will feel some discomforts.

It is important to be compassionate towards ourselves and others.

Call in your angelic team for comfort, and also draw down your “Pillar of LIGHT”.

These cosmic forces (SOURCE FREQUENCY) will continue to level-up and then settle a bit down and level up again—over and over.

These are “Energy Fluxes”. Also, as a reminder, prior to any major cosmic event such as the coming solstices, cosmic forces are stronger, and thus, quite potent.

An analogy that has been given previously is of an Olympic runner down the field. Perhaps he or she also has to jump over hurdles.

As the finish line is approached, there seems to be a picking-up of speed.

In like manner, the shifting of our space/time continuum is picking-up speed.

Other instances of more powerful cosmic events are just before New and Full Moons, major planetary retrogrades, and eclipses.

Often these “portals”, as has been already discussed in earlier articles, overlap.

These “over–lappings” add to the potency of the events that are happening.

For those who are new to the subject of energy transformation or DNA upgrading or incoming LIGHT or the shift of the ages—the “Now” has many ways of being referred to—it is a wise idea to read the previous articles written by those of us who study the cosmic forces—those of us who are often known as “Cosmic Scientists” or “Spiritual Scientists” or “Spiritual Astro-Physicists” and other titles.

Print-out the articles if possible and keep them in a special binder or case as important research literature.

They will be valuable as the “Divine Symphony” continues to play.

As the solstices arrive, relax and do not force any unnecessary outer activity.

Eat light meals such as soup or salad or veggie smoothies. Drink plenty of water with lemon.

Perform the appropriate rituals according to your path.

Allow the transformative process to move easily through you.

We are all being filled and upgraded with SOURCE LIGHT.

We have 1066 guests and no members online