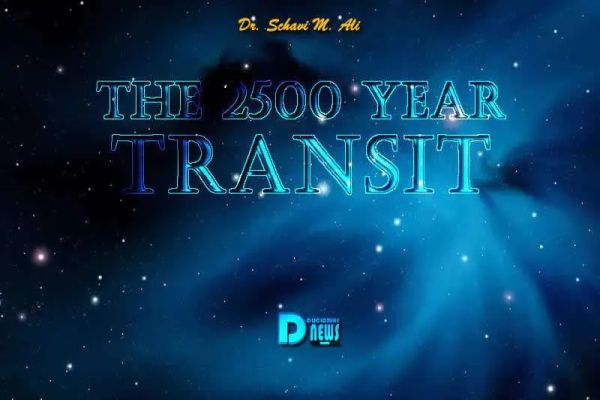 For the first time in 2500 years, the North Node, Mars, and Uranus are all aligned at 18 degrees of Taurus.

I refer to the “North Node” as the “Universal North Node” to distinguish it from the North Node that everyone has in his or her natal chart in a specific sign.

The “North Node” is also known as the “Head of the Dragon” and as “Rahu”—representing the ascension of the Moon in its precessional orbit around our planet.

It represents where we are headed, our purpose, and what needs creative structure or focus.

The South Node, known as the “Tail of the Dragon” and as “Ketu”, represents certain challenges that can be overcome by our usage of the actions of the North Node.

The South Node also reveals our gifts, what we actually do well, what brings us satisfaction, and what can be used to jumpstart the North Node activities.

Observe where Taurus is in your natal chart, and according to the characteristics of that particular astrological “house”, this is where the North Node is calling you to action.

The South Node will be in the opposite sign of Scorpio. Analyze its characteristics as well to understand how the North Node and the South Node must work together.

Mars is the planet of action, sometimes aggressive behavior, often warfare, and the cutting-away of what is unnecessary to further development.

It can have either a harmonious or disharmonious energy according to levels of consciousness.

In a natal chart, it represents where we tend to place lots of activity. Globally, it can set-off anger and war.

It is called “The Red Planet” not because of its heated, anger-prone character, but because it actually looks red when viewed through a high-powered telescope. In some cultures, red has symbolized passion.

This is why brides in Bharata (India) wear red at their wedding.

Uranus is the planet of revolutionary ideas, refusal to follow traditional rules and regulations, surprises, and technology. In ancient times, technology was both spiritual (connecting to the higher realms via specific types of meditation techniques) as well as via development of space vehicles called “vimanas” which allowed space travel.

The sacred texts known as the MAHABHARATA and the BHAGAVAD GITA speak of these.

In current times, however, technology tends to be thought of as computers, cell phones, micro-wave ovens, plasma television screens, spaceships, and other devices which have some dangerous radiation output.

As the North Node, Mars, and Uranus conjunct, hopefully there will be safe development of technology and a rising of consciousness to Super-Conscious levels by a larger percentage of humanity as the “Twilight of Kali Yuga” exits to make way for the next age of “Dwarpa Yuga” which is due to begin in “2025” according to some experts in Cosmic Science called “Jyotish” in Sanskrit (“Light of Source” or “Godly Light”) such as Sri Yukteswar, the author of HOLY SCIENCE.

By that time, Pluto, the planet of major transformation and transcendence, will have moved from Capricorn (corporations, big business, organizations, the military, rules, regulations, political leadership) in the Tropical Zodiac into Aquarius which is governed by Uranus.

Aquarians are also interested in technology, so by “2025”, there should definitely be safer technology for human benefit.

These “verses” of the COSMIC HOLY BOOK will offer vitally important teachings which must be heeded individually and collectively.

Although the 18-degree transit is on Monday, August 1st, 2022, its vibrational frequency will, of course, last much longer.

Like a lengthy book, it is the “introduction” or “preface” of a huge text of study and application which needs to be referred to often for guidance and review.

It is “hard cover” not “paperback” because it must last a very long time.

It deserves a special place on our “shelf” of “cellular records” which are transforming into sparkling crystalline as SOURCE LIGHT steadily cleanses and illuminates this realm.