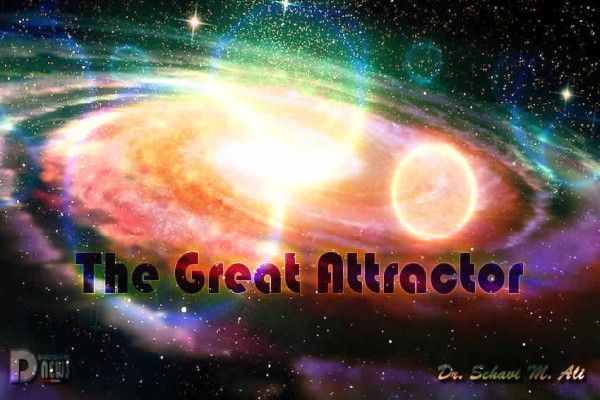 The GREAT ATTRACTOR is a massive electromagnetic field that is a huge energetic force and is larger than the center of the “Milky Way Galaxy”.

The Sun of our solar system will cross it on Monday, December 6, 2021—a time frame whereby each year our Sun seems to cross this mystical portion of space.

It holds a mass of over 1,000 “Suns”, and our solar system is rushing towards it at approximately 2.2 million kilometers per hour.

The Cosmic Scientist (Astrologer), Philip Sedgwick, is perhaps the best expert in modern times on this phenomenon.

The GREAT ATTRACTOR lies behind what is called “The Avoidance Zone” because it seems to devour galaxies that are near it.

However, at the same time that it is acting like a powerful vacuum cleaner, it is also surging outward with LIGHT that is a powerful transmitter of a vibrational frequency which is allowing human consciousness to awaken at enormous levels, even for those who are not fully aware of cosmic forces and their capabilities of tuning-up and re-configuring DNA in every cellular record of the human physical vessel.

Human consciousness is a transmitter and receiver of energetics from the cosmos on most levels, but not from the GREAT ATTRACTOR because it is seemingly totally a transmitter of information in no need of an answer back from the human collective.

The gravitational pull of this cosmic force bends light so as to unfold what is behind the “Avoidance Zone” as if to reveal parts of a secret chamber of potentiality—Divine revelations.

It is beyond complete analysis. We only know that sweeping LIGHT brightens at 14 degrees of the Sagittarius constellation.

Persons with a natal Sun sign, Moon sign, or Ascendant in Sagittarius receive specific downloads of information at the time of the crossing of our Sun with the GREAT ATTRACTOR (days before, the day of, and for days afterwards), even though its messages are available to everyone who will seek knowledge of a spiritual profundity as opposed to mere general academic subject matter.

Sagittarian energy is expansive, sees ahead into the future at long distances (thus making it very intuitive), is a justice seeker, is highly philosophical, offers beneficence to the worthy, and governs higher knowledge.

It can uncover the secrets that transformative Scorpionic energy holds.

Consequently, the GREAT ATTRACTOR at the Sagittarian point can also be known as THE GREAT REVEALER.

Our planet is intensely being involved in chaotic debates in this “Now” regarding inoculation mandates as more and more information is being revealed by scientists who have been in the center of the development of the “vaccines”—not those who have been outside of its manufacturing who merely have an opinion about its viability or not.

These are those called “whistleblowers” who can no longer follow unwise scientific creations just to keep their jobs.

They know the alarming rates of harm that the inoculations are doing to the physical body, mind, and spirit and how its ultimate horror is that it will cause a literal dependency on its substances like a drug addict who is hooked on an illegal substance and will do anything to obtain a “fix”.

Such a person will go along with anything if he or she is promised a “fix”—but this “fix” is free.

No one has to become a money-stealing criminal in order to get their “dose”— they merely show up at a designated inoculation center and stick their arm out to be loaded with graphene oxide, mercury, spike protein, and more toxins without even inquiring as to what is in the mixture.

At the same time, political arguments continue to be waged over problems in Afghanistan, about borders in various places where the worn and weary from oppressive circumstances seek entrance into other nations, about child trafficking, about climate change, and concerning many more chaotic results of centuries, generations, and decades of confused collective consciousness.

The GREAT ATTRACTOR will metaphorically transmit a frequency like an emergency telegram or like the old “Morse Code” machinery which will be “read” by the planetary collective of Earth/Gaia and of “Her” neighbors in other galactic placements.

What is done with the “reading” is the question.

The GREAT ATTRACTOR, however, is being supported by 14 “C-Class” solar flares which have occurred since the Solar Eclipse of December 4th, by 3 “B-Class” flares, and by an “M-Class” flare as well as a Coronal Mass Ejection which exploded on just Sunday, December 5th.

If we were to personify the cosmos in human political terms, it is as if the “Cosmic LIGHT Party” has won a victory that planetary humans must accept and acclimate to in order to achieve peace and healing.

SOURCE is the winner, always has been, and is now allowing “ITS” power to be fully sent forth from one of the most potent creations in space.

It is, therefore, SOURCE that is the actual GREAT ATTRACTOR, and it always has been.

Human free will has been allowed to have its way in certain arenas of the Earth/Gaia journey but is not the totality of existence.

Humanity has been given enormous power due to being aspects of SOURCE LIGHT, but like righteous parents (not those who themselves are filled with chaos and unrighteous behavior) in a household with children, it is the parents who make the ultimate rules that must be followed.

Truth in all arenas will be revealed in the weeks ahead that will cause celebrations for some and shock for others.

As the MAHABHARATA teaches: “There is but one Brahma which is TRUTH itself” (Volume III).

Some people will sigh in relief, and some will cringe in worry and wonder how to get out of the “prison'” that they have voluntarily walked into while finding fault with others who refused to enter.

There is a humbling that is about to happen.

Those who have seriously sought higher knowledge and the wisdom of how to apply it, will be further guided in their quests for elevation of consciousness.

After all, “Our God is a living God. God’s power fills the universe. God existed before the world saw LIGHT” (THE TALMUD).

It is never too late to seek the aid of SOURCE, even when there are evil warriors banging at the gates and climbing the walls because “The energy of God is Power that no one can ever surpass.

It is a Power with which no one can ever make a comparison” (THRICE GREATEST HERMES, Volume II).

LIGHT coming from the GREAT ATTRACTOR has been ongoing for many eras. Remember its recently discovered enormity—greater than the center of our galaxy! It does not merely send LIGHT on a given day of every year and then fizzle out.

It has grown brighter as the ages have elapsed, and it is just in recent timelines that humanity has been allowed to explore its depths. SOURCE gives unto creation what it can handle in particular timelines.

This is a “Now” of transmission of information so that our reception of the LIGHT can be unimpeded by unwise tampering’s with DIVINE DEVELOPMENT.

Thus, our system of TRANSMISSION AND RECEPTION OF ENERGY, FREQUENCY, AND VIBRATION will be strengthened, and we will eventually (perhaps very soon as humans calculate time) transform into the more crystallized multi-dimensional beings that we are being worked on by LIGHT and re-birthed to become—which indicates that we will have achieved and will continue to achieve HIGHER GOD PARTICLE CAPABILITY.

December is loaded with many aspects of LIGHT: daily cosmic energetics, the coming Full Moon (on the 18th or 19th according to individual time zones), the Solstices (in the Northern and Southern Hemispheres on December 21st), and the pre-shadow of the next Mercury Retrograde (December 29th).

An amazing “Cosmic Concert” is continually playing, and the GREAT ATTRACTOR has opened more doors for us to hear the “Music of the Ethereal Spheres”.

There is a message in the music! Dive deeply into the rituals of your path this month so as to receive the messages of not just all of the LIGHT events that are steadily playing their daily “tunes” but also so as to “hear” the “notes” of the GREAT ATTRACTOR whose name has been repeated 12 times in this article (including the title) because it deserves that much focus and attention and its importance instilled into our consciousness.