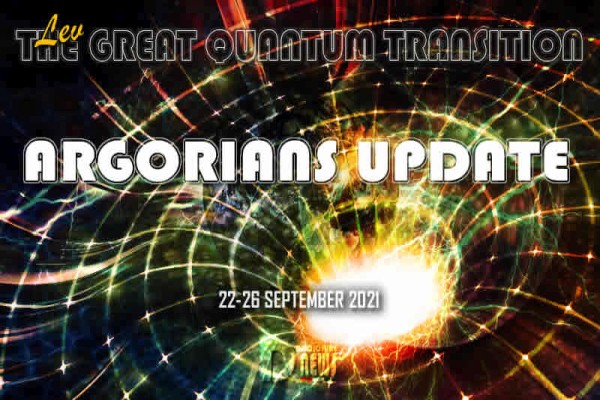 On September 26th, 2021, at 8: 38 AM CET, a squadron of 25D Argorians , transporting Earth to a new vibration orbit 5D, transmitted the following information.

The ships entered the quadrating space of the membrane separating the dimensions. Here, the purification of Earth from negative energy and the formation of a 4D plasma sharply intensified.

Below is a scheme of sequential, step-by-step operation of the Membrane cell filters, configured for plasma separation. 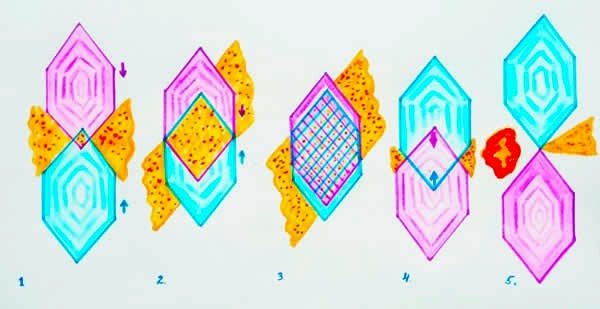 This whole process is repeated many times until the Earth’s field is completely cleared and the formation of the transitional 4D is completed.

On September 22nd, 2021, at 9:40 AM CET, Argorians have reported another update on their work with quantum streams directed to Earth.

Below is a figure illustrating the next stage of increasing energies of different spectra.

The rearrangement of the Earth’s magnetic field increases the impact on the interplanetary Crystal (the blue sphere in the center of slant vertical).

The Earth’s passage of this stage influences state of health, since any change in the magnetic field, is highly susceptible for all living things.

The movement of Earth’s axis (gray-blue inclined vertical) is proceeding smoothly, according to schedule, under the guidance of the space fleet security team.

The power of the planet’s Crystal and the flagship of the Argorians’ squadron are involved. The change in the marine environment is controlled by time-cycle programs by Siriusians’ Lunar base in 23D.

On a general background of white energy ASTEMO, the Intelligence plasma of space is formed from new information. The full range of the entire planetary system’s work is combined and adjusted.

The force field of the Argorians’ squadron ships cyclically releases a wave of yellow color SFAS energy (wavy lines in the figure) which helps to adapt new wave pulses in space.

The dark blue GRIKADO energy (the upper torus on the slant vertical) forms the structures of the planet’s life support system.

The planet’s axial channel is filled with the gray-blue BLIKGOR energy. This is the energy of the magnetic interaction of the airplanes.

Energy fields, disturbed during the core’s reformation by force fields, are stabilized. Pyramids-plasmatrons concentrate energy on the cell codes.

In the center of the axial channel, the interplanetary Crystal emits a pale blue with silver color BLISCO energy. It loads into the Hologram a program for the development of intelligence and thought processes.

The red energy ERMA streams expand around the axial channel (red rings in the figure). They form the 5D Matrix and the energy structures of the new matter.

The ultramarine energy FARMS is entering the channel system (the triangle at the bottom left of the figure). It forms mental development according to new programs and levels of consciousness.

The emerald-green KEGINO energy (the lower torus on the inclined vertical), comes out of the axial channel. It transforms the structure and development of matter with changes in magnetic media.

The protective field of the vacuum ring along the equator produces a shift of the land platforms.

“We have entered a space saturated by increased Magnetar’s radiation.

Keep an eye on your well-being. Blood pressure fluctuations, immune system, and thyroid reactions are possible.

The stresses are increasing, although measures have been taken to reduce the tension in Earth’s atmosphere. Gamma rays are strong.

Energy deflectors of the Argorians’ flagship trauelevetator are entering the opening state above the planetary complex. Measures to reduce adverse impacts are taken.

A powerful burst of Class A photon radiation has passed over the planet. The electromagnetic field is strained and needs balancing.

Argorians and Mahatmas of Shambhala tame down the excessively amplified quantum flow. This is one of the squadron’s works.

The Greater Cosmos is a living organism. New Stars are born and die in it, releasing vast stores of energy.

Everything lives and breathes in the body of the Creator. Therefore, we constantly have to monitor the state of energies in Magnetar.

The closer a squadron with a planetary complex comes to the 5D vibes orbit in Gerios Galaxy, the more powerful is the environmental impact.

For earthlings, these are the new energies of the third (closest to the Central Sun) sphere of the Greater Cosmos. Human bodies only half changed their properties. Everything is in constant adaptation to the conditions of the new 4D/5D space.

Increased exposure to cosmic radiation negatively affects all living things. DNA and RNA mutation failures occur, and the result may not be as quick as planned.

Argorians are constantly monitoring the processes taking place. Curators of quantum transition actively work. It is important for us to save a life and to elevate it step by step on a new level of vibrations.

Earth has long been ready for it, but humanity, as you see, in mass, does not perceive the new energies. There is a conflict of consciousness of the planet and civilization.

If all people were conscious, there would be no such problems. Everything would go naturally and harmoniously. Too much hate and evil are generated, causing immense pain to Earth.

A great cleansing is coming. Many people are no longer physically can carry this burden.

All our warnings and exhortations are perceived badly. It is unpleasant to observe that even people who believe that they carry the Light do the opposite by their actions.

They violate all the laws of the Subtle Plane, not understanding the structure of Earth. They take upon themselves the role of servants of the Light Hierarchy, stirring up negative energy with their deeds.

Get busy with your Earthly duties. It is on your shoulders to take care of the physical world. Clean up the garbage. Shut down nature-killing industries.

Destroy the weapons, the chemicals, the poisons. There are so many of them already accumulated that if it were not for the intervention of the Supreme Intelligence, you would have long ago ceased to exist! That’s why the changes are so slow.

Everything will be according to the Creator’s Plan. It has separated the grains from the chaff, and the latter is leaving the planet.

Life goes on. A new world on Earth is being built. The fractal of the fifth dimension increasingly unfolds in the space of the planet.

The winds of change will sweep away all that must go away once and for all. The Divine forces of the Greater Cosmos are with you. With you is the Creator, Its energies in the Earth’s field.

These energies broadcast new thoughts. All who are ready to perceive them are a new generation of people, with a different way of thinking where the purity of thoughts and conscience come first. They are a pioneers.

Observers! You are our beacons on Earth. Be aware of all that is happening. Remember, little streams make great rivers.”

A Galactic Federation Transmission: How To Ascend To 5D

The Prize - Teachings of the Masters

We have 1842 guests and no members online