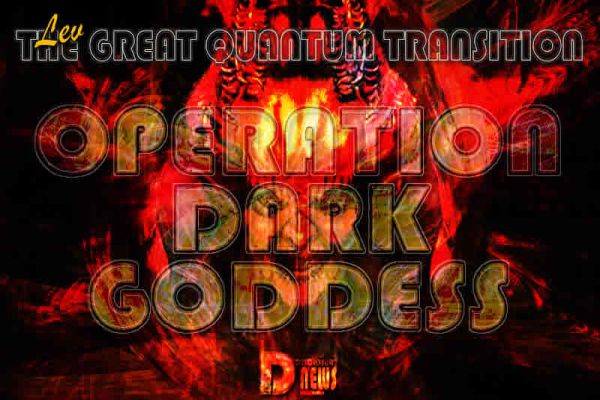 Unfortunately, not all are dealt with. The battle is going on. Dark Forces are still very strong, sleek, and shifty in using the Light for their survival. Especially, when they entered and gobbled men as possessors.

Operation Dark Goddess, which was conducted by the Light Forces’ ground team, gives additional info about it.

At one time, after a series of failures, the Black Co-Creator of the Local Universe, who betrayed the Source and switched to the Dark Side, made a new attempt to capture the Pleroma and aspects of the Absolute, acting through Earth.

He singled out the thought from himself in the form of a giant energy clot. Unlike ordinary thought-forms (of men, for example), it was not just a thought but an INDEPENDENT CONSCIOUSNESS.

IT EXISTED SEPARATELY from the Black Hierarch based on the software and self-learning programs embedded in it. It was truly a devilish masterpiece.

According to the initial Black Co-Creator’s idea, his materialized thought should not have existed by itself. In the beginning, he wanted to see what it would come to in the process of self-development and self-education.

In the case of success, he planned to implant this monster into Gaia to capture and subjugate Her Logos and Spirit to his will by establishing full control over them.

Today this is known as possession, but then there was no such thing. For the first time, the phenomenon appeared precisely with the Black Co-Creator’s consciousness which manifested outside as an independent substance. His self-learning thought became the first possessor in our Local Universe.

Subsequently, when it was confirmed that this entity was successfully developing, the Black Hierarch expanded the sphere of its influence not only on Earth but also on all people incarnating on it, since any consciousness has to exist in something or someone. That is, it needs a manifestation body.

The self-thinking substance was called the Dark Goddess. Its introduction into man is described in the Bible as the fall of Eve, that is, her adultery with Yaltabaoth, as a result of which Cain was born. The substance passed from Eve to Adam, and both they passed it on through genetics to the entire human race.

From then on, a particle of the Black Co-Creator’s consciousness stayed in EACH EARTHLING WHO WAS BORN.

But it wasn’t a death sentence. Everyone can get rid of this negativity, as well as all sins, vices, karma, and other things it caused, through inner work, and individual spiritual upgrading. Many have succeeded, although not always realizing that they have always carried an alien consciousness inside theirs.

The Dark Goddess behaved like an aggressive zombie program embedded in a person’s consciousness and tried to establish full control over him/her, overt or covert. This, for example, could provoke and push to commit atrocities, crimes, perversions, and other vices. It was possible to resist it only by the power of the Spirit, Faith, and Love.

The physical carriers of the Dark Goddess’ substance were men’s DNA and Earth’s Logos.

Gaia was completely cleansed of it quite recently, after Her release from captivity in the Mariana Trench (see DNI, OPERATION IN JAPAN. PART 2). Purification took a long time through many reboots of Her Monad and dissolution in the Pleroma.

The Dark Goddess was the situational essence of collective consciousness. She was the materialization of the consciousness of her creator in the form of Collective Intelligence.

Later, the Black Co-Creator, having passed the cruelest inner Armageddon, returned to the Light Side, to the Pleroma’s Highest Hierarchy, and now, together with it finishes off his monsters on Earth and in space. But his former consciousness continued to exist as a hypostasis of Absolute Evil.

After the Dark Goddess gained the necessary critical mass (that is, captured the right amount of human consciousness), she began to create anchoring points on the Earth’s surface.

It was required for the subsequent capture of the entire planet which was to become part of the Dark Goddess’ future body. And this, in turn, opened the way to the Pleroma for all Darkis.

The Dark Goddess built a Mandala of two intersecting triangles on the Earth’s surface.

Now this configuration – a six-pointed star – is known as the Star of David or the Seal of Yaltabaoth.

At its nodal points, she created local areas with the maximum concentration of her consciousness.

These were the main repositories of her substance which she was preparing to materialize in the future.

The center of the Mandala was the place corresponding to the current coordinates of 21°02’S and 25°11’E.

This point is located in the most remote, neglected corners of Botswana, in the Central District of which Serowe is an administrative capital.

The Pleroma’s Hierarchs and Co-Creators instructed their ground team to eliminate the Mandala infrastructure. The op’s main part fell on the wife of the Lightwarriors’ head because the Dark Goddess, although agamic, possessed predominantly in and through women, so the work on her should be carried out mainly by a woman.

In its course, Co-Creators extracted the substance of the Black Goddess from the nodal points of the Mandala crystal lattice and placed it in the Lightwarrioress’ Monad and its manifestation bodies.

It was one of the most complex and difficult ops in the entire service of the LFs’ ground team.

After removing the Black Goddess aspects from the next point of her planetary Mandala, and placing them in the Light Knightress field, they immediately began an aggressive seizure of her body and consciousness. More precisely, they tried to do it.

Lightwarrioress suppressed these attempts and eliminated the Dark aspects in Absolute Monadic Synthesis.

It was the hardest test for all members of the group who also used their spiritual, mental, and vital forces on supporting this work.

Each op’s stage lasted several days. And the most difficult moment was the beginning of work, when a whole conglomerate of aspects, that were concentrated in another Mandala nodal point, was placed in the Lightwarrioress’ Monad.

Beyond words were the heaviness and tension of this work. After all, they faced the aspects of the former Black Co-Creator of the Local Universe.

If for some reason, Lightwarrioress failed in any of the seven ops (at six points of two triangles and on a central spot) then her Monad would be destroyed.

Fortunately, it did not happen. Light Knightress has withstood this hardship, albeit at the very limit of human capabilities.

After the zeroing of all seven nodal points of the Mandala, the critical mass of the Dark Goddess’ aspects in Botswana was destroyed. It meant that she would never be able to be materialized as an entity and acquire a manifestation body in the form of Earth’s Logos.

Then all the team members thought that it was the end of the whole operation. But they were deeply mistaken. A month has passed, and the Lightwarriors already stopped thinking about the Dark Goddess, as suddenly she reappeared.

It happened when the group was conducting an operation on Rugen Island to destroy a copy of the Black Pleroma hidden there (see – DNI, 1. OPERATION IN GERMANY. PART 3). It turned out that the Dark Goddess had not been killed completely.

Having lost in Botswana her semi-assembled manifestation body in the planetary Logos, the Dark Goddess continued to stay, as a possessor, in the men’s bodies and consciousness.

Co-Creators and Lightwarriors, of course, knew about it. But they did not suspect that the Dark Goddess, using her aspects in people, can form a critical mass necessary for the assembly of another full-fledged manifestation body as an entity.

And she was just waiting for the right opportunity and got it. This moment came when Lightwarriors spent all their forces fighting her on Rugen Island.

One evening, the Dark Goddess cobbled together all her aspects from human bodies and consciousness and with all her might attacked the completely defenseless Lightwarrioress. At that moment, she no longer had the strength to fight back. Everything happened quickly.

For a short time, the Dark Goddess managed to possess the Light Knightress and control her. But could not do more, it was rather a demarche of despair.

There were no chances for assembling a full manifestation body, even theoretical ones. The last hope was the capture of the Lightwarrioress’ Monad.

The latter couldn’t produce an inner Monadic explosion – she had not enough energy. Only the Power of Love remained. All Lightwarriors, of course, supported her as best they could. But there wasn’t much they were able to do. Everything depended only on her – would she withstand or not.

The unthinkable duel lasted all night, one of the most terrible in the life of the group. By morning it was all over. The aspects of the Dark Goddess inserted in Light Knightress and trying to subdue her Monad and consciousness were annihilated. At a huge price, at the limit of human capabilities, and far beyond them!

And again, it wasn’t the story’s end. Yes, the Dark Goddess will never be able to assemble her manifestation body in Earth’s Logos and men. She will not have sufficient critical mass. But her remaining aspects still stay in many earthlings, in their minds. And only the person himself can neutralize them in himself by the power of Light and Love, by the Spirit force and resistance to any Evil.

It’s no doubt that the day and hour will come when not a single aspect of the Darks will remain in the Universe. But this hour hasn’t yet come, so it’s too early to relax.

Any of us can be the bearer of the Dark Goddess’ aspect and not know anything about it. Her presence is not diagnosed from the outside in any way. It can only be felt by Heart. And sometimes by Intelligence when overflow obsessive destructive thoughts, provoking the Evil in all its forms. It is important to know the reasons and never forget about them.