The Great Quantum Transition - To Get Unstuck

The Great Quantum Transition - To Get Unstuck 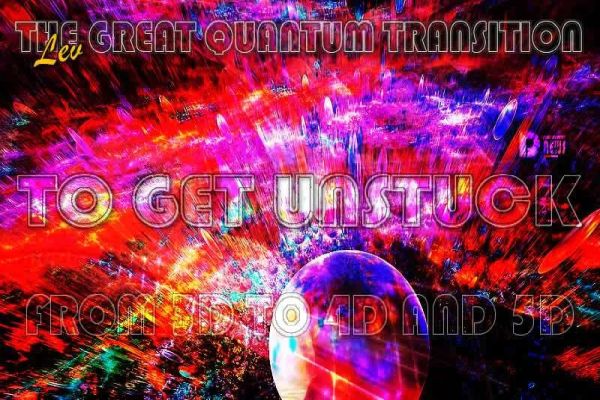 All these symptoms are caused BY MANY SIMULTANEOUS processes. Our body are not a bag of meat and bones, but a CHANNEL of the energies of the Source, Pleroma, Galaxies, Constellations, Stars, and Planets, including Gaia.

For millions of years, this channel has fed and supported the life of parasitic civilizations that have completely switched the conduit to themselves.

To do it, on Earth and throughout the Local Universe, on ALL planes, they have built a giant auxiliary system programmed to pump out our vital energy.

With the help of Co-Creators, Higher Light Hierarchy, the Galactic Committee and friendly space races, Lightwarriors continue to dismantle and destroy this parasitic infrastructure.

Disclosure News narrated the operations carried out, but they are only the smallest part of undisclosed ops. By joint efforts, they have completely chopped off and removed the space links of the vampiric 3D System, but it’s remnants on Earth are still in active mode.

It pumps its creators with our life power through egregores, sacred and Power Places, rebuilt to the needs of parasites, through economics, politics, social, racial, and national conflicts, local wars, culture and bloody sports, plandemics, and MSM, especially through TV and social networks.

​This is the agony of dying parasites living on the principle: you will die today along with the others, so that I don’t die tomorrow.

With each quantum wave, directly and through the Sun, the parasitic ice mantle is melting uncontrollably.

The coronal mass ejection and the Solar Tsunami brought to Earth another batch of codes and programs for further transformation of us and the entire planet.

If we understand it, want and are ready to accept them for our reboot, codes and programs will help us to get unstuck from all parasitic channels and their consumers.

All the energy that used to go to the parasites through us, including our own, will remain in us, changing the physical and Subtle Bodies, our consciousness.

It will restore our original Divine energy exchange with the Source, if we have prepared us for it by our inner work.

These energies circulate in us in a complex pattern through millions of our receiving and transmitting antennas – cells, strands of DNA and RNA, vessels, meridians, chakras, and Subtle Bodies.

Inside us, they form an irrigation and drainage system of unimaginable complexity. Many of us have clogged it with karma and continue to occlude it with their anger, hatred, envy, greed, aggressiveness, and intolerance.

These “tender” feelings materialize in the form of imperil which accumulates and tightly plugs up our entire system.

That’s why we experience such pain and discomfort when Solar winds and high-frequency quantum waves wash away all the dirt and slops with which we have been filling ourselves for decades.

Within us, energy flows circulate along a complex trajectory – in the form of a torus, snake-like vortices, and other patterns. Dirt, plugs and adaptation products are excreted through all pores, joints, ligaments and organs.

For many, the main load is carried by the right part of the body. This can cause a decrease in vision with the right eye, hearing with the right ear, discomfort in the joint of the right shoulder, elbow, knee, foot…

But the WHOLE body participates in adaptation and purification. It inevitably leads to an exacerbation of latent and chronic diseases, physical and mental. When new high-frequency waves come to Earth, absolutely healthy people also experience discomfort.

This month was especially rich in such quantum and Solar storms.

On March 18, Co-Creators and the Galactic Committee launched the procedure for switching people to fifth-dimensional space and its development programs. For it, in addition to 4D Portals, five-dimensional ones were opened on Earth for the first time.

The next phase of the Transition has begun.

Recall. On the Subtle Plane, we are already all divided (at the level of Souls), according to our vibrations, into three large fractals: people of the third, fourth and fifth density.

In October 2021, 4D and 5D men began to switch to the space of the fourth dimension. Co-Creators and the Guardian removed personal locks, Veils, and plug-ins; recoded the liquid medium, changed the protein structure, connected to a new, 4D, grid of consciousness.

The active phase of the transition to the fourth density was in December 2021 when the border between the third and fourth dimensions was opened through Portals. Starting this month, the 4D structure (fractal) was raised at the required level.

As soon as the Earth fractal of the fourth dimension started working, Co-Creators immediately began to prepare for the inclusion of the fractal of the fifth dimension. In March 2022, they have opened borders to fifth density worlds. For whom they, did it?

Among those who passed into the first wave of Transition were those for whom 4D was a period of very short respite. Their bodies are not designed for the tasks of the fourth dimension. The codes of 5D have been loaded into them for a long time, several years in advance.

Many got a liquid crystal silicon body several years ago. Their 5D codes and programs should unfold in the fractal of the fifth dimension.

On March 18, such a procedure was launched. Now, in the Earth’s space, the matter will unfold according to different codes: to the old ones, 3D, but it won’t last long; and to the new codes of 4D and 5D.

The corpus took it as stress. Many people have a feeling that they are cut at the level of the heart chakra, into two parts. From the strong energy pain in the back, they did not feel the lower part of the body…

Those who possessed clairvoyance, and looked at themselves on the Subtle Plane, clearly saw the upper part of their body, but couldn’t see the lower one. It was dissolving, literally disappearing like a surrogate body.

When asked what it was, the answer comes: “You were disconnected from 4D and transferred to 5D. You reacted like that because you have a different body now. You just don’t realize it yet.”

When a person is switched to a 4D body, he/she, indeed, may not even realize that it is already different. And when they switch to 5D – it simply slaps them in the face.

Entering 4D, we are not coming in 5D yet but from the usual 3D we completely didn’t get unstuck.

Therefore, it seems that nothing has changed in our life, everything is the same.

But after going through the entire transit 4D to the end, we enter 5D.

And our stick into 3D finally breaks on a Subtle Plane, very sharply and painfully.

Like everything new, for the physical body it is a shock, a danger.

No matter how much we prepare ourselves, our body will still react. Part of life is unstuck from us; we lose a significant part of ourselves.

Now our awareness, habituation and unfolding of the new reality will go gradually. And for everyone it will happen strictly individually. What we sow, we will reap.

We have 1097 guests and no members online