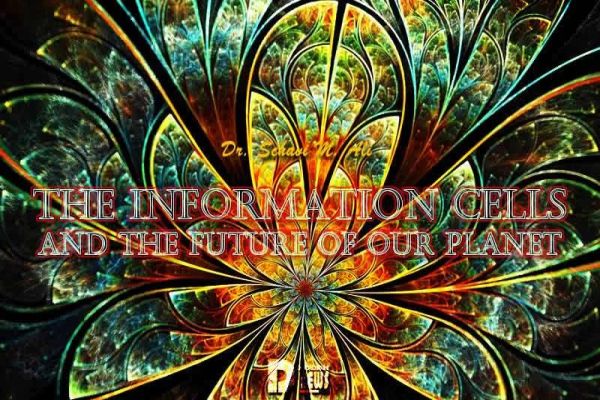 Several articles ago, I discussed the “crop circles” (geometrical symbology) which have been seen around the world—some of which are man-made, and some of which are of extra-terrestrial origin.

When mankind creates them with various kinds of tools and machinery, the plant life in them is destroyed; but when those of other planetary realms make them, the plant life strangely continues to thrive.

The Russian Cosmonauts who have de-coded the messages in the “crop circles” are Dr. Marina Popovich and Dr. Lidia Andrianova.

The “crop circles” are known as “information cells”, and Dr. Popovich and Dr. Andrianova have de-coded 250 of them.

Two that are very significant are one which is made like the ancient Kemetic (Egyptian) “Ankh” (the cross with the loop at the top) and the other is also of ancient origin and is a circle with a dot in the center.

Since ancient times, the “Ankh” has represented two things: immortal life and the uterus, fallopian tubes, and birth canal of the female.

The second symbol represents our Sun in the center of which is a powerful vibrational frequency—both material and spiritual.

Interestingly, our planet is shifting from male dominance to female leadership because it is believed that women have a greater propensity to love and nurture from the heart.

It is believed, therefore, that a larger percentage of women than men are developing as “LightBringers” (also called “Lightworkers”) as our space/time continuum moves along.

Let us briefly discuss some of the issues regarding what I term “The New Feminine Revolt.”

An example of this is the women in Iran (with other countries joining them) protesting the wearing of the “hijab” (an almost total face covering except for the eyes) after a woman was murdered there after being arrested by the “Morality Police” for not wearing one.

Most of these protesting women realize that the “hijab” is modeled after an ancient face covering which men wore too in order to be protected from the tremendous sandstorms in that area of the world.

Glass is made from particles of sand, and in fierce winds, the sand can cut the face if it is not protected.

Wearing a “hijab” has nothing to do with religion. It is a cultural practice.

Some women do not know of the ancient weather reason for wearing such a face covering, but they do know that it was forced upon them by men.

There are situations throughout all cultures where men “told” women what to do and threatened punishment if they did not obey.

Considering language, most people are familiar with the phrase “the rule of thumb.”

For example, it someone asked another person what is the best way of making sure that a stir-fried vegetable dish is really tasty, the person consulted might say: “Well, the ‘rule of thumb’ is to make sure that you use plenty of oregano”.

The phrase “rule of thumb” originated in England and followed into the development of the colonies in the USA.

If a woman went to court complaining that her husband had beaten her, the judge inquired as to what the instrument was that was used, and if it was found to not be bigger in circumference than the husband’s thumb, he was found innocent of all charges.

In other words, women could be beaten as along as nothing bigger than a man’s thumb was used!

This was known as “The Rule of Thumb.”

Of course, we do not want to find fault all men.

Many of them are wonderful, loving, kind, and spiritually-oriented.

However, history does show that the male species in general has been the most destructive to planetary harmony.

This is yet another reason why our planet has been advised to make what is termed a “Consciousness Transfer” by the messages sent and de-coded by Dr. Popovich and Dr. Andrianova.

The next symbol of very mystical symbology is the circle with the dot representing our Sun which was originally a female symbol, not a male one.

The Moon is also a feminine symbol.

The Sun has been focused upon by extra-terrestrial messaging and explained by the Cosmonauts that it will be (and in fact now is doing so) giving-off extremely powerful solar flares and coronal mass ejections of positive electromagnetic protonic strength which will soar into the depleted magnetosphere surrounding our planet and eventually into the inner core and outer field of our planetary home—Earth/Gaia.

Thus, a higher level of radiation will occur that mankind is not prepared to receive.

It can disrupt humanity physically, mentally, and emotionally.

Other “crop circles” give warnings about

1.) weather cataclysms (called “Cycles of Correction”),
2.) the previously diminished planets in our galaxy and others whose perceived “advancements” only served to destroy them, and
3.) other information that is vital to our planet’s future thriving.

“Energy Fluxes” (a continual flow of cosmic plasma particles coming into the magnetosphere) is occurring to both the far side and the Sun-facing side of our planet, and a mixture of slow, medium, and fast-moving solar winds are creating shock waves, particle density, and extreme pressure within and outside of Earth/Gaia—all of which increases strong weather patterns such as storms, earthquakes, volcanic upheavals, hurricanes, tornadoes, floods, etc.—the “Cycle of Correction” as mentioned earlier. Mainstream science tries to explain it all in logical ways that do not venture into the realm of an INFINITE BEING, A SUPERNAL INTELLIGENCE, A CREATIVE SOURCE.

The lessons in the need to elevate may become more powerful if mankind does not heed the messages being sent.

Just like caring, loving parents give their children certain rules, and if these rules are consistently broken, then particular privileges are taken away, so too has SOURCE given us certain Divine principles for our good which if followed, will give us wonderful blessings.

We will, for instance, enjoy the “New Golden Age” which many people think has already arrived.

Yet, it is only in “labor” for birth. Let us have harmonious thoughts, of course.

However, we cannot look at the challenging situations on our planet through the proverbial “rose colored glasses.”

Denial of the chaos in the “3d” realm will not dissolve it.

How are we advised to work towards the aforementioned “Consciousness Transfer”?

Many Western-oriented people will be surprised—some perhaps even shocked.

We are advised to partake of the ancient Vedic spiritual practices which include the various “Yogas” (“Bhakti,” “Jnana,” “Hatha”, “Raja”, etc.) and to study the ancient Vedic scriptures which teach Divine principles and give astounding information about the future—a future that is now unfolding.

Interestingly, when the Russian Cosmonaut, Yuri Gargarin, went into space in 1961, he was supposedly wearing a prayer mala under his clothing, and he told his ground crew to bring him down from space at the 108th minute.

The significance of this is that a traditional mala contains 108 regular beads with a 109th “Guru” bead.

One of the Vedic scriptures teaches that our Sun is 108 times the circumference of our planet.

There are also 108 books called the UPANISHADS which are supposedly the most important of the total 1,008.

It is well known that for a long while, many scientists have been and are now reading the ancient scriptures and are astounded at what has been revealed.

It has been said that Yuri Gagarin had read many of the ancient Vedic teachings and was a proponent of them, but he could not be very open about this due to the Communist agenda of the country, and Communism usually disavows spiritual discussions.

The Physicist, Nicola Tesla, also studied the Vedic scriptures and had regular meetings with Swami Vivikananda.

Those who choose to elevate in consciousness, according to the messages of our outer galactic neighbors, will be eventually given a holographic-like body of LIGHT capable of teleportation.

Yogis (male form) and Yoginis (female form) of the distant past have had this capability given to them.

The process of formation of the “LIGHT BODY” is why we are now having to experience certain physical, mental, and emotional discomforts as the “labor” of our “re-birth”, but these experiences will become easier and easier as we continue to elevate.

LIGHT from “beyond the beyond” as is often stated in this “Now”, is offering humanity an opportunity to change rather than to use its free will to destroy itself.

Mankind has much to ponder as its world plays-out chaos and much to work on in order to truly be “Galactic Citizens” and not just a planet of disorder with a small percentage of humans who are elevating to HIGHER KNOWLEDGE.

As a verse in LEAVES OF MORYA’S GARDEN states: “The knowledge of ancient times has returned to the Earth, for the dawn of civilization was in the East.”

It also says: “The future of humanity is based upon them attaining illumination.”

The Western-oriented inhabitants of our planet must relinquish their egotistical character trait.

It is from the “ancient East” from which we can gain great help.

The “current” East in so many ways is just as damaged as the “current” West! Everyone—regardless of your so-called “race,” skin coloring, physical features, level of traditional education, or economic situation, must level-up.

The major question is: How many really want to do so? Raise your hand if you do!