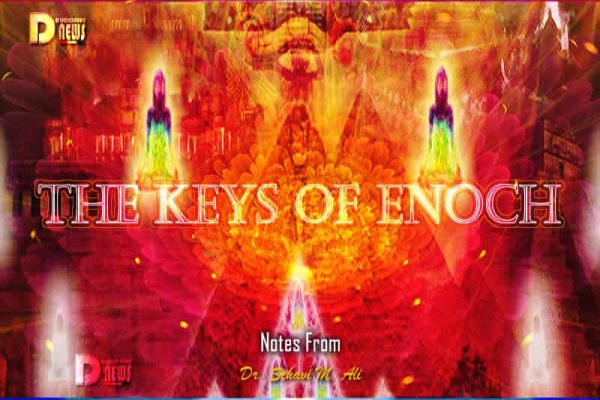 Many years ago, the Physicist Dr. J.J. Hurtak, Founder of “The Academy for Future Science”, wrote a powerful lengthy book entitled THE KEYS OF ENOCH and also wrote an overview of the book which itself is comprised of several pages.

As many people know who study Spiritual Science, “Enoch” is said to have been at one time a human being who became an angelic frequency, perhaps what may be referred to as an “Ascended Master”.

Dr. Hurtak says that “Enoch has returned through a pure vehicle of LIGHT in the form of a holy script” (OVERVIEW: THE KEYS OF ENOCH, p. 4).

By the term “holy script”, Dr. Hurtak is referring to a very mystical meditative revelatory experience through which he received sacred knowledge regarding not only the ancient past but also our current timeline.

The following points constitute some of the amazing information delivered to Dr. Hurtak which is very vital for the “Now” that is occurring.

Based upon further research, I have added in brackets my own analysis of some these points.

Humanity is being transformed from carbon-based to crystalline energy,and is developing a multi-stranded DNA from the double helix formation and is gradually being able to communicate more powerfully with the Super-Conscious. [World scientists are increasingly admitting that indeed human cells, the nervous system, the entire body is dramatically changing and that an evolutionary process is happening along with planetary and galactic changes].

Eventually spiritual sciences will be more prevalent, and even the parts of the HOLY BIBLE that contain true, yet esoteric information will be understood. [Many people around the world are now questioning their religious leaders regarding information that has been deleted from certain scriptural texts or added for specific purposes. Many who can financially afford it are conducting their own scholarly research by learning other languages and traveling to ancient sites].

A complete polar reversal of the Earth is coming, and as this occurs, it will move through what is called a “null zone” which will cause extremes of both heat and cold as well as the thrashing of earthquakes, tsunamis, and volcanic eruptions which will destroy much of creation. However, a new Earth of LIGHT will be created whereby those of Higher Consciousness will be able to thrive. [Many people are speaking of a “New Earth” as a change in consciousness, not a totally new planet. Experiences will be according to levels of consciousness; thus, there will be those who experience peace, health, love, abundance, and those who will not but who will be given an opportunity to level-up higher and enjoy the same experiences as those who will have already elevated in consciousness. This is the mercy of SOURCE. Therefore, free will still be allowed. Those who use it wisely will be greatly blessed but those who do not will receive the consequences of their misuse of free will].

All planets in the Milky Way Galaxy as well as in other galaxies are transforming. [World scientists have been admitting this for many decades, especially the Physicists, Biologists, and Geologists. One such geological scholar is Dr. Gregg Bradon].

There will be a space/time overlap that allows humanity to understand the past, present, and future as one energy and time travel and parallel universes. [It seems, therefore, that the television programs and theater movies that we enjoy as science fiction have and still do give us true information. It is said, for example, that Gene Roddenberry, the creator of the old “Star Trek” episodes had received in some manner very accurate futuristic information—in dreams perhaps]?

Many advanced beings live off of synthesized LIGHT, and they are higher evolved than Earth beings. [Ancient Vedic scriptures speak of this].

Some advanced beings seek to help the Earth, while some seek its destruction. This is the fight of darkness versus LIGHT. Some human beings are drawn to the darkness and some to the LIGHT. [It is so important that more of humanity be anchored to the LIGHT].

Merkaba vehicles are geometrical vibrational energies of LIGHT which work in both physical and spiritual dimensions created by the Shekinah (“Divine Presence”) which is the ETERNAL LIGHT.

“Anti-Christ” means world governments which are currently controlling humanity by influences on their thoughts and actions.

“Lightworkers” are being prepped for service of a higher order and are vibrating to a higher frequency. [This involves being cleansed of old programming and ancestral imprints called “samskaras” in Sanskrit which translates as “conditionings” and which are disharmonious experiences recorded in the cellular memory].

Ancient healing techniques of color, sound, and breathing will again be taught. [More and more Energy Healers and Naturopathic Doctors are being educated and offering their services].

The use of the vibratory sounds of the Hebrew alphabet, as well as other ancient sacred scripts, will raise the vibratory rate of the human body. Visualizing, for example, the flaming Hebrew letter YOD (“Cosmic Messenger”) at the third eye and then projecting a sacred golden pyramid of LIGHT above the body will energize the chakras. [In the larger text, Dr. Hurtak is very focused on Sanskrit, Medu Neter, and Hebrew languages].

The GREAT PYRAMID on the Giza Plateau of Egypt has been encoded with knowledge that allows humanity to evolve to its ultimate Divine linkage. The reprogramming of consciousness will take place from twelve crystalline regions around the Earth, all focused on the GREAT PYRAMID which is actually the center of the Earth. This will allow humanity to create cities of LIGHT which are self-sustaining. America (North and South) is being prepared to be a “New Atlantis”—a higher intelligence of energy than that of 12,000 to 24,000 years ago. [There were cities of LIGHT in the ancient past. The home of Sri Bhagavan Krishna, known as “Dwarka”, for instance, was comprised of crystal temples and other buildings which shone brightly in the sunlight. Also, in ancient Kemet there were pyramids and temples which glowed so brightly that they could be seen for miles].

There are codes of cosmology in the biblical book of “Revelation” that is knowledge about the creation of the universes.

Time must be spent in prayer and preparation for advanced wisdom to occur. [Interestingly, in the HOLY BIBLE there is the verse which says: “Study to show thyself approved.” A verse in the HOLY QU’RAN states: “The ink of the scholar is more precious than the blood of the martyr.” These are just two examples of the importance of study that is expressed in many of the world’s holy books].

There is a real hierarchy in the cosmos, and thus, traditional theological teachings, philosophies, speculative theories, and intellectualized dogma must be abandoned.

“Spiritual Israel” means those with Higher Consciousness. There are no specific “chosen people” via racial or cultural type.

Who and what ENOCH, METATRON, MICHAEL, and MELCHIZEDEK are must be understood. They are Divine energies of LIGHT and VIBRATION. [In other words, it seems that Dr. Hurtak is saying that these beings who are referred to as “angels” by most people are spiritual atomic frequencies of life force. In the Vedic teachings, “angels” are the “Devas” (male term) and “Devis” (female term), and these words translate as “Lighted Beings” and as “Shining Light”. The word “angel” is from the Sanskrit term “anjali” which translates as “offering” and also as “to pray”. Thus, when we pray to SOURCE, we are making a “Divine Offering”, and it is taught in Kabbalah that prayer often summons “angels” to help us. Kabbalah began in the temples of Kemet, and the word translates from the Medu Neter language as “Spirit and Soul of the Eternal”. Specifically in Hebrew, it translates as “That Which Has Been Received”. In the Medu Neter language, “angels” are the “Neteru” which translates as “Divine Forces of Nature”].

The above points are just a sparse few of the deeply profound teachings from Dr. Hurtak which, of course, are more detailed in his complete text.

During this month of January as we enter a new twelve-month cycle called “2022”, THE KEYS OF ENOCH as well as many other books which deal with our galactic past and our future space/time continuum are worth reviewing (or for some perhaps reading for the first time) so that our cellular records (all of which contain DNA and especially the mitochodria of our DNA—the information transmission and reception aspect of it)—can be transformed and attuned to SOURCE FREQUENCY.

Then it can be truly collectively proclaimed that “WE ARE BLESSED BY SOURCE LIGHT”.