Hero-Savior or Messiah Complex
A+ A A- 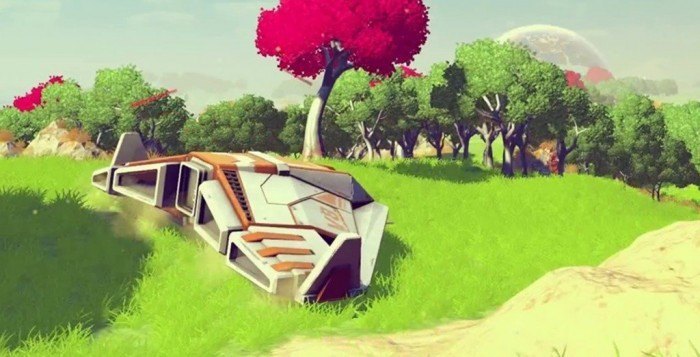 In June, a team of programmers will release a ground-breaking new video game called No Man’s Sky, which uses artificial intelligence and procedural generation to self-create an entire cosmos full of planets. Running off 600,000 lines of code, the game creates an artificial galaxy populated by 18,446,744,073,709,551,616 unique planets that you can travel to and explore.

Though this artificial universe is realistic down to the dimensions of a blade of grass, faster than light-speed travel is available in order for players to bridge the unfathomable distances between stars.

Chief architect Sean Murray says No Man’s Sky is different than most games because the landscapes and distances aren’t faked. While most space-based games utilize a skybox that simply rotates between different modalities, No Man’s Sky is virtually limitless and employs real physics.

“With [our game],” Murray said in an interview with The Atlantic, “when you’re on a planet, you can see as far as the curvature of that planet. If you walked for years, you could walk all the way around it, arriving back exactly where you started. Our day to night cycle is happening because the planet is rotating on its axis as it spins around the sun. There is real physics to that. We have people that will fly down from a space station onto a planet and when they fly back up, the station isn’t there anymore; the planet has rotated. People have filed that as a bug.”

Even the animals on the game’s planets have unique behavioral profiles, created with a “procedural distortion of archetypes” that requires a sequence of algorithms categorized as a “computerized pseudo-randomness generator.”

“Certain animals have an affinity for some objects over others which is part of giving them personality and individual style. They have friends and best friends too. It’s just a label on a bit of code—but another creature of the same type nearby is potentially their friend. They ask their friends telepathically where they’re going so they can coordinate.”

Playable characters include astronauts separated from each other by millions of light years. According to The Guardian:

“The overarching goal for players is to head toward the centre of the universe. This common destination will increase the chance that people will encounter one another on their journey (even if the game sells millions of copies, when your playground consists of 18 quintillion planets, a single encounter is statistically unlikely).”

This presents a degree of existentialism to the game, as it does not shy away from the mind-numbing vastness. Rather, it embodies and celebrates the wonders of the universe, even imitating fractal geometry in an homage to the repeating patterns found at every level of existence.

“If you look at a leaf very closely,” Murray explained, “there is a main stock running through the center with little tributaries radiating out. Farther away, you’ll see a similar pattern in the branches of the trees. You’ll see it if you look at the landscape, as streams feed into larger rivers. And, farther still—there are similar patterns in a galaxy.”

The similarities between the real cosmos and the game cosmos presented by No Man’s Sky have actually provoked philosophers and scientists to ask whether a simulation like this, or perhaps one even more vast, could also be a repeating pattern in the universe.

To discuss this as it relates to the game, writer Roc Morin interviewed philosopher Nick Bostrom, the Director of the Future of Humanity Institute and the author of the now legendary “Simulation Argument,” a controversial paper that has garnered a cult following in the last several decades. The Simulation Argument hypothesizes that since advanced civilizations throughout the universe are almost certain to have created vast numbers of cosmic simulations, statistically speaking it is quite possible that we are living in one — that in fact, our universe and our reality exist within a computer simulation created by an extraterrestrial or future humans (or posthuman AI).

“This paper argues that at least one of the following propositions is true: (1) the human species is very likely to go extinct before reaching a “posthuman” stage; (2) any posthuman civilization is extremely unlikely to run a significant number of simulations of their evolutionary history (or variations thereof); (3) we are almost certainly living in a computer simulation. It follows that the belief that there is a significant chance that we will one day become posthumans who run ancestor-simulations is false, unless we are currently living in a simulation.”

In other words, the Matrix.

Incredibly, in recent years, scientists have actually sought to prove the Simulation Argument, running experimental computer tests that look for anomalies in the laws of physics. In a piece for The Ghost Diaries, I wrote about a team of German physicists using lattice quantum thermodynamics to try to discover whether there is an underlying grid to the space/time continuum in our universe. Though they have only recreated a tiny corner of the known universe, a few femtometers across, they have simulated the hypothetical lattice and are now looking for matching physical limitations.

One well-known constraint involves high energy particles. It turns out our universe does in fact have a physical limitation that is not fully understood. It is known as the Greisen–Zatsepin–Kuzmin or GZK cut off. And this limitation is eerily similar to what physicists predict would exist in a simulated universe.

Additionally, in the last couple of years, theoretical physicist S. James Gate has discovered something rather extraordinary in his String Theory research. Essentially, deep inside the equations we use to describe our universe, Gate has found computer code. And not just any code, but extremely peculiar self-dual linear binary error-correcting block code. That’s right, error correcting 1’s and 0’s wound up tightly in the quantum core of our universe.

Remarking on the incredible verisimilitude of No Man’s Sky, Murray recalls a query by none other than the creator of Tesla and SpaceX.

“Elon Musk questioned me about this. He asked, ‘What are the chances that we’re living in a simulation?’ ”

“Even if it is a simulation, it’s a good simulation, so we shouldn’t question it. I’m working on my dream game, for instance. I’m more happy than I am sad. Whoever is running the simulation must be smarter than I am, and since they’ve created a nice one, then presumably they are benevolent and want good things for me.”

Of course, the game isn’t 100% realistic, as Murray did take some creative liberties. For example, he defied Newtonian physics by allowing for closer moon orbits (presumably to facilitate more cinematic landscapes featuring giant skyward moons). He also had his programmers reconfigure the periodic table to allow for varying atmospheric and particle light diffraction. The purpose: so that some planets could have green skies.

Being the God of a simulated universe does have its perks.

This article (The Video Game that Made Elon Musk Question Whether Our Reality is a Simulation) is free and open source. You have permission to republish this article under a Creative Commons license with attribution to Jake Anderson and theAntiMedia.org. Anti-Media Radio airs weeknights at 11pm Eastern/8pm Pacific. If you spot a typo, email .