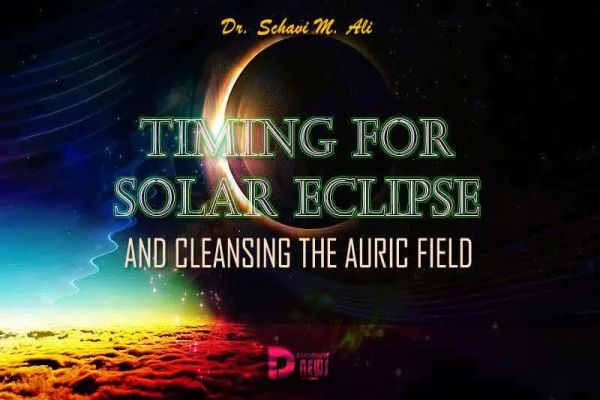 According to scientific calculations, the Solar Eclipse in Scorpio (Tropical Zodiac) on Tuesday, October 25th, 2022, will begin at 4:58 AM Eastern Daylight Time (EDT) as our Moon begins to cross our Sun as seen from the Atlantic Ocean.

Then it will move East over the next four hours and will end at 9:01 AM (EDT) just south of India.

This is a very cleansing, releasing, clearing-out, and transformative eclipse.

Although its sweeping-away energy will be at a height tomorrow, it will take approximately six months to complete its work, and even then, acclimation to what has occurred individually and collectively will have to happen.

Being in Sidereal/Vedic Libra, this eclipse will cause focus on balancing all aspects of our lives so that movement forward is easier and with a sense of stability and not further confusion and wondering about what to do.

Before balance is achieved and before transformation occurs, there is usually upheaval where necessary.

This is the clearing and cleansing process of the LIGHT codes that are soaring daily into our solar system, galaxy, and planetary realm.

Some people are confused as to discussions on LIGHT and COSMIC FORCES and the term “COSMIC HOLY BOOK” and the use of the word SOURCE to define the CREATOR, the INFINITE PRESENCE, the DIVINE ABSOLUTE, the ALL.

The “source” of anything is its root cause, its beginning, its foundation.

Ancient texts speak of the DIVINE MOTHER having been “Self-Created,” “Self-Creating,” and having “birthed” all things from “Her” vast, watery cosmic womb.

Worship of “God” in feminine form was the first revelation to our planet.

We must understand that SOURCE is neither male nor female, but “ITS” creative powers are more feminine than masculine.

Symbolic of SOURCE FREQUENCY, it is the female who carries and gives birth to a baby.

It is the female who suckles the baby with breast milk.

It is the feminine chromosome “XX” that is initially created, later becoming “XY” if the growing fetus is to be male.

It is the precious Pearl that is created in the dark of the oyster shell.

It is the brightly shining dawn that comes forth from the dark night sky.

Thus, LIGHT comes from darkness like the term “Guru”— in reference to a Spiritual Teacher or Acharya of ancient paths is known as a “Guru” which translates as “Bringer of LIGHT from darkness” (and which is also the name given in Sanskrit to the planet Jupiter which governs expansion, higher knowledge, philosophy, and long-distance travel—either literally or in consciousness).

SOURCE is a term that all paths can relate to whether their notion of “God” is “Yahweh” or “Allah” or “Zoroaster” or “Sri Matre,” etc. based upon the various languages spoken on our planet and referential definitions of the DIVINE as delivered by a Sage or Prophet.

For millions of years—not just thousands—the heavenly realm of stars and planets has been taught to have encoded messages for potential life experiences based upon their geometrical angles and vibrational frequencies in relation to each other.

As part of Psalm 19 states in the HOLY BIBLE: “The heavens declare the glory of God. Day unto day, they pour forth speech, and night unto night, they display knowledge.”

All Divinely-revealed holy books speak in a similar fashion about the “chapters” and “verses” of the COSMIC HOLY BOOK—some in much detail and some with only quick mention.

It is given, however, that we are not to worship the stars and planets, but we are to respect them as creations of SOURCE that have consciousness and messages.

The reason why many (perhaps most) spiritual leaders of the traditional “Abrahamic” religions do not teach about the powers of the cosmos is because they have not been taught about it nor have, they studied on their own. In fact, the name “Abraham” is phonemically from the Sanskrit “Brahmah”—the “Expander.”

There is some evidence that the biblical “Abraham” did not actually exist as a human being and that he is a metaphor for the many groups that SOURCE has created.

However, the focus of this article is not to debate “religion.”

To cleanse your personal auric field prior to the eclipse, one of the following can be done three times today, preferably after you have completed your activities for the day.

Thus, perhaps late afternoon and into the evening will be best.

You can also cleanse once —an hour before the eclipse begins in your time zone tomorrow if you have been regularly engaging in a daily spiritual practice because your auric field will be cleaner than that of the average person who does not have a daily spiritual tuning-in to commune with SOURCE.

Understand that we all need a periodic auric field cleansing because there are times when even those who have a spiritual regimen are out among those of lower vibrations—such as while shopping or driving or being in beauty shops or barber shops or bank lines or at social gatherings, etc.

For those who wear and pray with prayer malas, be sure to cleanse it today (if you have not cleansed it recently), and “seed” it with your chosen mantra.

Wear this mala daily throughout eclipse season. Remember, we have a Lunar Eclipse on November 8th, but both the Solar and Lunar Eclipse energies will extend for about the next six months.

Cosmic forces today are strong and will continue to build throughout the day such as solar winds of almost 600 km/s and solar flares in the upper “C-Class” ranges and pulsating dense plasma particles activating the magnetosphere.

Today is a very awesome day for another very important reason:

TODAY IS “DIWALI”—the ancient Vedic celebration of the victory of LIGHT over darkness.

Today people around the world who honor this day will pray to the aspect of SOURCE known as “Lakshmi” who blesses us with spiritual and material abundance.

She is depicted dressed in a beautiful red or deep pink dress with golden threads and sitting on a lotus blossom.

One hand is raised in greeting, and with the other she tosses gold coins to us. Lakshmi also heals and protects.

On both sides of Lakshmi is an elephant— each of which pours water from its trunk.

Water is cleansing and has spiritual energy. It also represents emotions.

So, JAI DIWALI! (“VICTORY OF LIGHT OVER DARKNESS”)! May everyone who reads this document, which is a type of LIGHT AND SOUND TRANSMISSION AND RECEPTION, be blessed to elevate to HIGHER KNOWLEDGE and to receive greater LIGHT.

We have 1103 guests and no members online