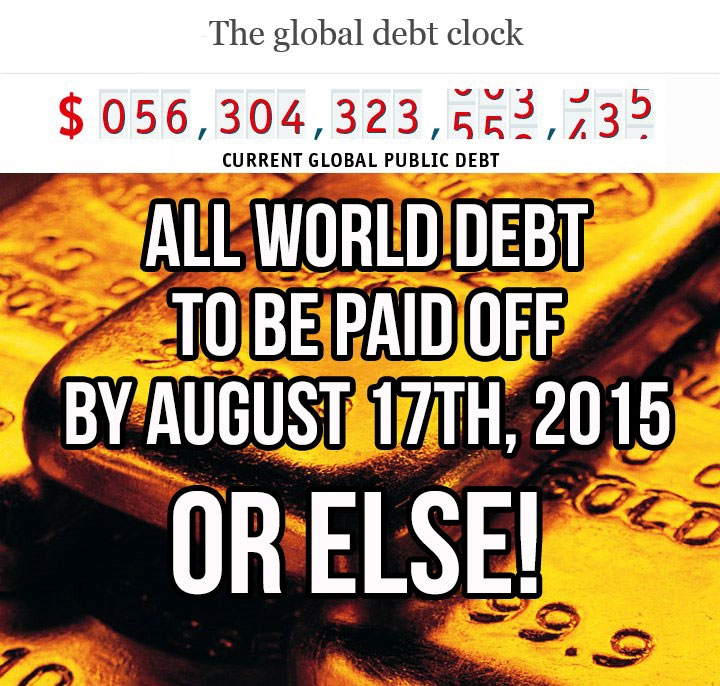 Imagine having all of your debt paid off, such as your home mortgage, credit cards, student loans, car payments, etc…? An alliance of 128 families headed by a person known as “M1″ have agreed to do this for the sake of humanity. This proposition is creating a showdown between all world leaders and whether they’ll be willing to accept these debt payments versus allowing the global population to continue to suffer under a financial system designed to keep us in perpetual debt, subservience, control, and conformity.

The following is an excerpt from the article, ” Prosperity Fund Payments To Be Released By August 17, 2015”

Dan Lutz stated, “The plan that they’re following is called ‘The Plan of the Experts’. The Plan of the Experts is where they used a royal breeding program to bring one person forward and it took them seven generations to take the 128 families to bring it to one (person). And that person would then have control over all of the trusts and through a system of checks and balances, would be able to bring the wealth of the planet to the people so everybody would share in the abundance.

According to Lutz, M1 paid off all of the world debt “in payments 1 through 11″, including prepaying the debt that the IRS would tax them on. “Each payment is for a specific purpose. Like all of the countries debts, basically it’s under 25 countries that are getting all of the payment to pay off everything under one (of the 11) payments. Each one (of the payments) represents something else. Once that’s all paid, on top of that, there’s the human obligation and that’s basically to share the wealth with every person on the planet.”

“He (M1) prepaid the tax on paying off all of the debt. Just like any other debt that’s out there, whether it’s personal debt, credit cards, mortgages, or anything… the idea is basically to pay everything else off. It’s only a fraction of what’s available to him, under his control.”

The paying off of all world debt would be an amazing gift for humanity but here are a few things we need to pay attention to:

One thing to consider is what currency would remain after all debt is paid off. If it’s the same type of monetary system based on fiat currency, then there will continue to be debt and this is only a temporary bandaid for a much larger issue.

Another thing to consider is how this may be tied into a world currency via the New World Order. In this scenario, there would be a push for a one world government to control any global currency and banking system.

If all debts were paid off, would there be a revaluation of all currencies? Hypothetically, without debt, the median price of buying a home should go from $80,000 to about $20,000 (or less). Cars that normally cost $15-20,000 should sell for $4,000 or less. A gallon of milk would go from $4.50 to under a dollar. Of course, these are all hypothetical numbers but the real numbers would likely come close to these estimates.

In the event that these payments are denied, it would implicate all world leaders as being in favor for keeping all of the world’s citizen’s in perpetual debt, thus creating a worldwide revolution against those who continue to keep us in oppression and tyranny through a broken system of economic slavery.

A world without money and full of ABUNDANCE

If you’re not familiar with the Venus Project, the please check out this video:

Imagine living in a world of abundance and prosperity without the need for money?  Imagine using space age technology within the next few years?  Imagine living in a world with clean air, fresh water, and healthy, non-GMO food? This can ALL be accomplished through the Venus Project and would be the perfect segue for us all to transition out of a world of economic slavery and into a world full of abundance for all!

The implementation of the Venus Project was mentioned by M1 as a viable solution to which this author firmly approves.

You can find out more about the Venus Project here from their official website.

The deadline is set for August 17th, 2015. By August 18th, we’ll know which world leaders are willing to work in humanity’s best interests and which ones are content keeping us suffering through economic slavery.

We have 1596 guests and no members online