The Problem with ‘Regular’ Sunscreens, Plus a List of Safe Sunscreens
A+ A A- 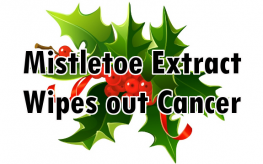 Actress Suzanne Somers, author of Knockout and other natural health books, chose a mistletoe extract instead of chemotherapy for her breast cancer tumors. Surgery (lumpectomy, not mastectomy) and radiation had not succeeded with ridding Suzanne of her cancer.

Her doctor recommended chemotherapy, but she chose Iscador, a mistletoe extract that has to be ordered by a physician from Europe. That was around a decade ago, and it appears she’s still around with breasts intact and cancer free.

USA physicians are allowed to order and administer Iscador under “compassionate care act” rules, which makes allowances for non-standard medical uses that are resistant to “standard of care” applications.

Another instance of mistletoe defeating cancer rests with Joan van Holsteijn of England. Her 2009 Christmas gift was the final treatment of her cancer by mistletoe extract injections, just like Suzanne had done for her breast cancer!

When the painful large lump on her leg was diagnosed as non-Hodgkin’s lymphoma in a British clinic, Joan was advised to receive chemotherapy. She confided to the UK Daily Mail, “I was very scared. I was scared of the cancer, and scared of chemo because you can become so ill from it.” Her specialist told her that the mistletoe extract could be administered after chemotherapy sessions.

But Joan opted for the mistletoe extract as the first and only treatment. “It [chemotherapy] runs down your immune system to the point where you don’t feel well. Even if you get better from the cancer you still have to deal with the treatments,” she added.

It’s not unusual for mainstream British newspapers and magazines to feature stories of cancer patients treated by alternative means.

About Mistletoe for Cancer

“Mistletoe extracts are marketed under several trade names …, most of which are available in Europe. … these extracts must be prescribed by a physician. However, most doctors in the US do not use it … [though] it is allowed by compassionate use. Physicians … can order [mistletoe extracts] directly from European manufacturers.”

Mistletoe extracts are usually injected, but they can also be taken orally if appropriate. The extract is used because the leaves and berries of mistletoe are poisonous. The extract contains several cytotoxins (cell toxins) which induce tumor necrosis (tissue death) in the cancer cells while programming apoptosis (cancer cell suicide).

Negative side effects are very rare, and when they do occur they are usually minor allergic reactions. However, people with heart problems or who are on MAO inhibitor antidepressants are at risk for serious reactions with mistletoe extracts. Suzanne’s only misinformation was that Iscador is a homeopathic remedy. It’s not, but that’s an error made by many.

We have 883 guests and no members online