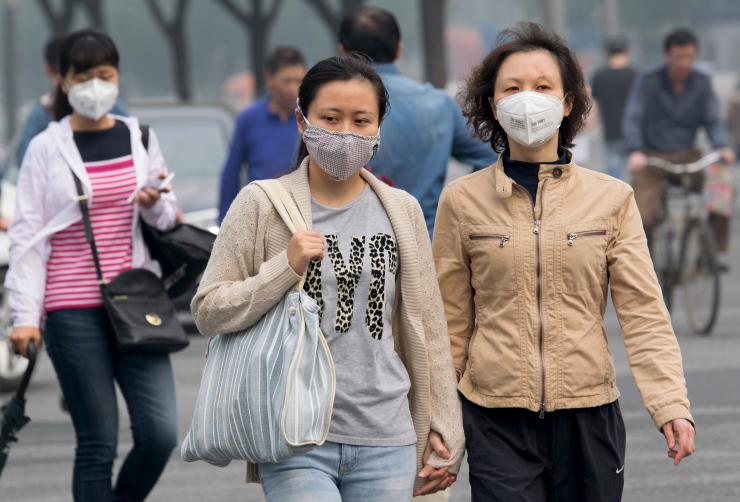 A new study reveals that the human body absorbs harmful pollutants in the air through the skin, equivalent to the levels absorbed through breathing. The absorption through the skin, called “dermal uptake,” has been found to potentially cause asthma and cancer due to prolonged period of exposure.

The substances, known as phthalates, are semi-volatile chemicals commonly used in the production of soft and flexible plastic, or as dissolving agents in other materials. These chemicals can also be found in all kinds of household cleaners, fragrances and cosmetics.

There are 20 different types of phthalates obtained from oil, and about 2 million tonnes of the chemicals are being produced worldwide every year. The chemicals scattered in the air could potentially enter the human bloodstream, breast milk and urine, researchers say.

Science Alert reported that semi-volatile chemicals, like phthalates, could pass through the skin relatively slowly, but could potentially develop into damaging levels over several years.

Phthalates are also known as “endocrine disruptors.” These air pollutants are able to affect the hormonal systems of the body including the oestrogen and androgen hormone systems.

Previous research shows that certain types of phthalates have been associated with asthma. A study in 2008 suggested that adults could develop asthma due to heated PVC fumes, while exposure to phthalate in households could increase the risk of developing asthma and allergies in children.

"We're big sponges for these chemicals," lead researcher, John Kissel, from the University of Washington in the US, told Science News. The new study challenges the findings of earlier research showing the skin can be a relative intact barrier to air pollution or has a relatively slow mechanism of absorption, which lessens the effects of air pollutants to the body.

The researchers analysed the effect of “dermal uptake” and the levels of phthalates found in human bloodstreams. Six healthy male participants were exposed to increased air concentrations of two types of phthalates, diethyl phthalate (DEP) and di(n-butyl) phthalate (DnBP).

DEP can be found in personal care products, like moisturiser, as a solvent, while DnBP is commonly used as a plasticiser in products, such as nail polish, according to The Latest News. The researchers exposed the participants to the chemicals for six hours inside a special chamber.

They were first allowed to use specialised breathing hoods to prevent them from inhaling any of the phthalates. The team then removed the hoods for the following week.

Each of the participants was required to take a restricted diet and to avoid personal care products 12 hours before the experiment. The researchers collected urine samples 66 hours after the test.

Dermal uptake of DEP has been found to be 10 per cent higher than inhalation intake, and DnBP was 82 percent higher than being inhaled. The researchers also found that older participants have higher dermal uptakes of both DEP and DnBP.

"The uptake of DEP by the 66-year-old is five times greater than that of the 27-year-old, while the uptake of DnBP is seven times greater," researchers said. However, they noted that the results require follow-up investigations in a larger group of participants.