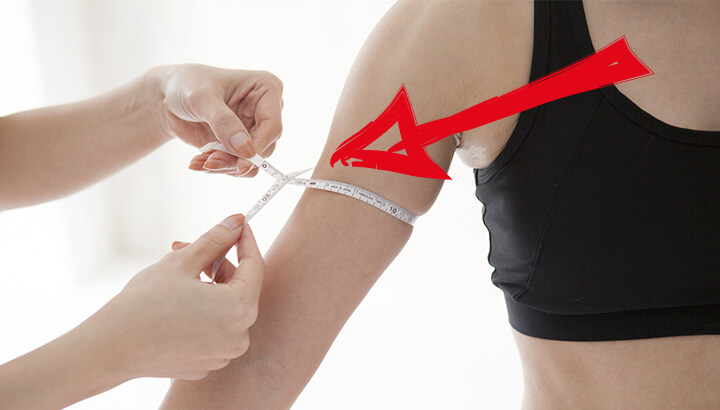 How do you know if you’ll die from heart disease? It turns out the size of your arm can tell you a lot more about your health than you may realize. Here’s how arm size can determine whether you’ll die from a heart attack.

What does arm size have to do with your heart? Well, it seems that the size of your arm may reveal whether you will survive a heart attack. A recent study published in the American Journal of Cardiology found that the bigger your arm muscle is, the less likely you are to die from heart disease. Researchers studied 600 older adults with cardiovascular disease. They measured the circumferences of the participants’ mid-upper arms and calves since these areas determine muscle mass. Researchers also studied the participants’ muscle function through gait speed and grip strength.

During a follow-up period that averaged about one and a half years, researchers found that 72 of the adults — aged at least 65 years — died. However, the participants’ whose arms had a higher circumference showed more positive outcomes. Data suggests that both measurements are associated with the chances of dying of heart disease.

But the researchers found that only arm circumference showed “significant independent prognostic capabilities.” Researchers concluded that people with larger arm muscles, compared to calf muscles, were more likely to survive a heart attack. Furthermore, researchers also concluded that a simple measurement of the arm could determine risk factor of heart disease in older patients.

Those with sarcopenia may be more at risk for a heart attack.

Here’s the thing, for many people, particularly seniors, staying physically active can decline with age. In fact, when older people lose muscle mass and strength as they age, it’s referred to as sarcopenia. According to research from Johns Hopkins University School of Medicine, sarcopenia can result from a number of factors including:

Sarcopenia leads to frailty, increased insulin resistance, fatigue and falls. It can also lead to chronic diseases like diabetes and rheumatoid arthritis, and even death.

Therefore, arm muscle is a marker for a healthy and fit body, which accounts for why those who have larger, more muscular arms are less likely to die from a heart attack. So, it’s no wonder then that exercise along with improved nutrition could help tackle muscle deterioration.

The World Health Organization (WHO) estimates that 17.5 million people die each year from cardiovascular disease, which accounts for 31 percent of all deaths worldwide. And 80 percent of all cardiovascular disease deaths are due to heart attacks and strokes. Engaging in physical activity for at least 30 minutes each day will help to prevent heart attacks and strokes, suggests WHO.

The American Heart Association (AHA) recommends strength training at least two times per week. Strengthening your muscles allows you to more perform everyday activities more easily and helps protect your body from injury. Stronger muscles also lead to a boost in metabolic rate. That means you’ll burn more calories even when your body is at rest.

Regular physical activity can even help those who have had a heart attack. Although some people are afraid to exercise after such a devastating event, regular physical activity can actually help reduce your chances of having another heart attack, says the AHA. In fact, in 2014, the AHA published a statement suggesting that doctors should prescribe exercise to stroke patients. According to the AHA, there is strong evidence that exercising after a stroke can improve cardiovascular fitness, walking ability and upper arm strength.

Signs you’re having a heart attack

The more signs and symptoms you have, the more likely you’re experiencing a heart attack.

Note: while some heart attacks strike suddenly, many people have warning signs and symptoms that occur hours, days or even weeks in advance, says the Mayo Clinic.

If you think you’re having a heart attack, don’t hesitate, act immediately — call 911 or your local emergency number. Some people wait too long because they don’t recognize signs and symptoms. If you don’t have access to emergency medical services, then have someone drive you to the nearest hospital.

If nitroglycerin has been prescribed to you by a doctor, take it as instructed while awaiting emergency help, says the Mayo Clinic. Or, if recommended by your doctor, take aspirin while waiting for help to arrive. Taking aspirin during a heart attack could help reduce heart damage by keeping your blood from clotting.

However, don’t take aspirin unless your doctor or emergency medical personnel recommend it. In fact, don’t do anything before calling 911. The emergency operator may recommend that you take an aspirin. But first, he or she will make sure that you don’t have an allergy to aspirin or a condition that makes using it too risky.

Improving your health with exercise can help prevent a heart attack.

The bottom line is, there are many factors that come into play in whether you’ll have a heart attack, including your genes, what you eat and how much you exercise. Arm size is a relatively new science that acts as a marker of good health. But nothing is written in stone. If you take steps now, you can greatly improve your chances of not having a heart attack. Through healthy eating and exercising you can increase your muscle strength and arm size. And that could mean preventing your ticker from turning into a time bomb.