The Meaning of Commitment
A+ A A-

It’s All Faked – Even Death 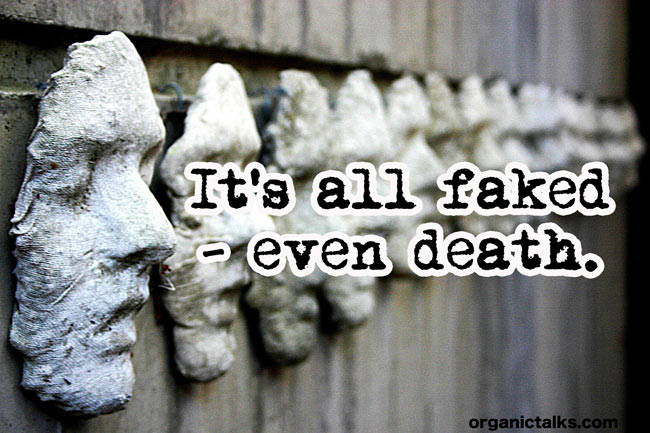 Sometimes I wish I had the perception of a 5-year-old. I still have a vivid memory of that state, in which everything that happens is more or less just a phenomenon – nothing really to be concerned about.

When I look at it now, I see how liberating it is to be without any opinions or concepts – I’m just there, a witness, monitoring every movement, every action without attaching any specific meaning to it.

I can still see the people in my head, having fierce, loud debates on topics, I didn’t know anything about. However, the laughter, the anger, I can remember, because those are emotions, and for understanding emotions, you don’t need to have experience.

One thing, however, was a miracle to me – how fast people got carried away with their emotions, because of a single remark or gesture. I always hoped things wouldn’t turn out too bad, because then everybody would get in a fight and my father would decide that we had to leave immediately.

My calculation was easy; as long as the adults were in a good mood, I knew I would be able to play with the other kids, but the moment things got tense – the game was over.

I gave this as an introduction to an understanding which arose in me on my way home. When we are kids; we wish to grow up as fast as possible to be able to take part in those conversations, to be taken seriously as an adult.

I had, of course, no idea that this whole game wasn’t, in fact, no game, but an exhibition of disturbed personalities whose only aim was to be ‘right’. They never cared about what anybody said, but waited for the smallest possibility to roar out their claustrophobic viewpoints.

Sometimes, there was indeed laughter, but mostly anger shifting into frustration, because of someone’s inability of converting everybody else in the room to their own private little truth. For most people, this was unacceptable, since they had the exact same agenda in their minds – the same words coming from different lips.

Even today it is the same; people gather to exchange their opinions in these recurring events called ‘conversations’. As adults – so they say. In my view, their clothes and their body height are the biggest difference to their counterparts playing in the sandpit – their kids.

Although I must say that kids are very reasonable and down-to-earth beings in comparison. They speak their minds and have no hidden agenda behind their smiles (which they are still unable to fake).

When someone says: ‘He’s still like a kid’ – what does this actually mean?

He’s not literally a kid, nor does he act infantile – does he? No, he looks unspoiled, he acts unspoiled, uncorrupted, and yet not naïve. This is what we mean. A clean approach; open-hearted, open-minded. Somehow soft, but not weak. Clean eyes, clean smile – no add-ons.

However, this is very rare, of course. The standard person transitions into a nightmare – seamlessly – without being aware of it – in most cases, even to their deaths.

They have no idea of who they are, what they are doing here, and where they are going from here. So they smile – artificially – but they do smile. You can’t blame them – it’s everywhere. They are nothing special; the average person.

Isn’t this how it feels like? You do all this stuff with all these people; you do what you are told, but somehow you are not doing it for yourself, but for others. First your parents, then all the others who have lined up to tell you what to do.

Somewhere in between, there is a moment when the natural smile loses hold; it slides into a grimace which feels heavy on the face. The same for laughter.

What signals you that you are an adult? Your age? Your credentials? Your mustache? Your ex-wife?

I never understood the concept of it. For most people, it is a purely physical thing. They look in the mirror and see they are not kids anymore – but grown-ups with hemorrhoids. It was a long way which passed quickly – to get to this face in the mirror. All these little hints tell us we are adults.

The part which interested me was: where does magic fit into this picture? The magic you’ve felt as a child: the druids, the fairy tales, the awes of this world? Where is that?

The biggest handicap while growing up is that no one tells you anything significant. The magic is gone – everything is fake and only ‘in your head’. You get this repeated so many times that you start believing it. Everything turns grey, since everything is ‘relative’ and ‘unsure’.

Being a big boy

The biggest deception of adulthood is probably the idea that we are a complete person just lacking a bit of luck and experience. This completeness is a concept, because no one told us what we are supposed to do, but to collect all this stuff that we buy, and all this knowledge that we gather, on one big pile with our name attached on it. This pile – this is us.

The only low point is that we have to die; and we sense that, this injustice. Not so much the physical aspect; it’s more the fact that this person is gone, which we have painstakingly built over the years. It makes no sense.

Good to know is that we are evolved primates who have come a long way, who have a history and ancestors, and kids (or not), and that everything is not lost – after all – because ‘we’ will continue to live through our descendants. What a relief. Now we can die in peace. Nothing was in vain – everything will be fine.

This is what most people know, that somehow you are here just by coincidence (it could have been someone else, but you were lucky), and that this coincidence has a downfall which we don’t like to talk about, because it does not fit into the picture.

And how do we deal with things that don’t fit into the picture? We ignore them with contempt, or fear. It depends on the day and circumstances.

Then why do we live so destructively, when we know that we are going to die anyway? Aren’t we doing this for our kids? For a better tomorrow?

There was one spiritual teacher who once said that most people live in total fear throughout their lives and even on their deathbed – they die in fear, because they have not the slightest idea of who they are.

So many recognize they ran away from that fact, and that they are unprepared for this last journey, because it is not in the script – so what now? The doctor looks at you (because nowadays you die in a hospital) and has nothing to say but to comfort you that “everything will be alright” – how the hell does he know?

It’s all faked – even death. They lie to you from day one, but not on purpose; they believe this stuff, but it catches them too – untimely.

It’s so funny; we get taught all this stuff, but no one tells us how to live. It’s like a well-kept secret that only you know nothing about. And so you occupy your mind with senseless work not to think about the unthinkable.

You engage in all kinds of conversations if God exists or not, or maybe some sort of higher intelligence that will save your ass eventually. But the satisfaction isn’t really there. It helps – in the moment – as a tranquilizer, but the minute you’re alone you know that all your convictions feel weak and empty. This is unjust.

Even the understanding that all matter in its most basic form is energy hasn’t changed much, because: what if it’s wrong? You know how scientists are; one day they claim one thing, and the other …….hm, I guess, it’s all relative.

I think adulthood is just a consensus reality; a switch turned on if certain parameters are met. The players themselves have no clue what it is about – but what they do know is – they need to get there, because it will bring them power which they don’t have as kids.

Power and influence on their own lives and on the lives of others. They want to have their own car, their own flat, their own phone; however, their inner world hasn’t really changed much.

And this is the main problem – this whole life is a copy paste situation. We saw it when we were kids, and all we do is replicating the stuff into our lives. Experiences come and go, but we don’t know how to deal with them, because no one taught us what to do. It’s just this endless stream of things happening to us and our same-old reactions to same-old situations.

It’s automatic, on auto-pilot, all we can do is watch it happening all by itself. And this is what frustrates us; it seems as if we can’t do anything about it – and it is true, because we have all this knowledge how to impress this world with whom we are, but we are incapable of dealing with ourselves. We don’t understand it; it is too complicated.

When I look at animals, I see the perfect attitude. There is no doubt in their minds of who they are. But we are full of fear and doubts, because doubt comes from fear, and this fear comes from the fact that we don’t know who we are.

This is why very young children have this magic in their behavior which we adore so much. It’s looking at ourselves the way we were – before getting an identity to deal with. We’ve created this mould which we need to fill in every day, and there’s no time for us anymore. It’s only this role that we have to play – kids don’t have that.

They do whatever comes to their minds; they can switch roles and professions whenever they want to; they don’t comply to anything but their inner guidance, which always knows what is right for them.

The art of life is to have this spontaneity alive at all times, because then adulthood is only an idea filled in by a playful presence which knows exactly what to do at any given time. This ‘thing’ never identifies entirely with the current role.

It can play with it – but it knows that it is not it. This is the moment when life is no longer that serious anymore – then when you know that you are not the dancer – but the dance.

Whatsapp
back to top
It’s All Faked – Even Death
Stop Looking And See
Imagine a World...

We have 1302 guests and no members online