Souls of Animals
A+ A A- 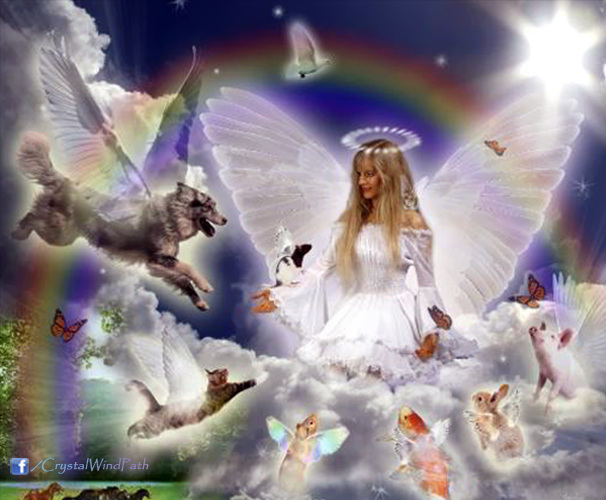 I have always believed humans have an eternal soul but I wasn’t sure if animals were the same. Then in 2001, myself and others, started to see the Morph, a transdimensional phenomena that pervades a room with swirls, vortexes and striations that look like dry rain. Through the Morph I found I could look into a mirror-world that is close to this one.

Others discovered the same ability. The mirror-world

may be an anti-particle world, but whatever it is, it seems to contain the spirits of humans that are alive now, as well as those that have passed away. But I have also seen animals in there, which means they have a soul and are eternal, but first let me discuss briefly what the mirror-world is like.

It seems to be a dimension close to ours in which our subconscious mind exists. But the subconscious doesn’t exists there as an ephemeral idea, or a collection of phantasmagorical thoughts, it is a real human identity, evolving as we do on earth. It’s the other you.

You are in an after-life right now while still alive. It sounds odd but it makes sense. For you to be eternal some mechanism has to retain a perpetual memory of you. The brain ceases at death but if your subconscious and therefore your personality already exists in another dimension as a real person, death would not be the end of your identity or your memories of self. In effect, your subconscious in the mirror-word acts as the human soul.

I believe that animals have a group soul of their species but those animals that have been in contact with humans, like domestic pets, seem to have individual identities. In the mirror-world,

I’ve seen many hundreds of dogs and cats and horses, as well as other animals like the lion, giraffe and elephants.

So I became convinced that animals survive death because if they didn’t they wouldn’t be in the mirror-world, and because they live on they must have a spirit or a soul that is evolving.

When you see dogs in there they are very clever, they respond to human thought and they act intelligently. They have real personalities and they seem to be able to think through problems. What I found so interesting was that they exhibit the ability to comprehend a task and follow it to its conclusion. Just in case you are wondering, I have never heard them talk, they just bark from time-to-time as normal.

Places in the mirror-world sometimes correspond exactly to geographic areas on earth. In that mirror-world one day, my mirror-self image was walking on a road through the Welsh hills. I heard a woman call out for help, she was in a wooded area below the road about two to three hundred yards away, by a stream. I started to run.

The dog was quickly beside me, neither in front nor behind. There was something so intelligent about the way it began to run and how it didn’t impede me or jump up as dogs do. We belted down the road exactly side-by-side. I felt the dog knew what we were doing and that the woman needed help.

The animals seem so clever in that mirror-world, and they seem to respond to human needs. They can definitely read our thoughts, in there anyway, and they exude love and service to humanity. Goodness knows why we treat them so terribly here. I have always thought that a human that shows no respect for animals, or, if he or she mistreats them is the lowest of the low, not worth saving. I believe all of nature has a spirit and that it is alive and aware of our presence.

Once you see that you will understand it all differently. You will become more humble and cautious of animals’ feelings. You will love them and care for them as the spiritual beings that they are.

You may choose to become vegetarian as killing animals to sustain yourself shows a terrible lack of awareness and self-indulgence, and it may get you into serious problems as time goes on.

You will find yourself opposed by a superior force, one that is here to keep this planet safe and ensure its long-term survival.

back to top
Slouching Towards Bethlehem
Tell the “Lords” of Karma That You Are Sovereign – No Longer a Lightworker Part 2
The CoVid-19 Endurance Test: Will We Pass It?

We have 1800 guests and no members online