Libra 2019 - Beautiful Associative Air Spirits
A+ A A- 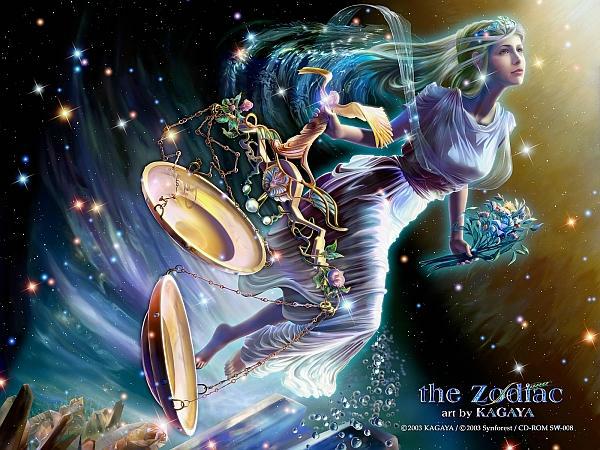 When the Sun transits Libra, we are shown the light of new relationships, ideals, and other pleasing social forms. It's the beginning of Autumn in the Northern Hemisphere, with its focus on harvesting that which is agreeable to us, socializing and connecting with a greater "perfect vision" while seeing the endings in the old forms of our lives.

As I mentioned in the Virgo celebration last month, that sign marked the end of Summer in the Northern Hemisphere, and the end of Winter in the Southern. In the Northern Hemisphere, the distributive practicality of Virgo sorts the fruits of the labor resulting from Summer, and begins our preparation for Autumn. In the Southern Hemisphere, Virgo helps you do practical adjustments to the emerging rhythm of Nature after stabilizing the heart Fire that preserves the life force following the Cancer energy that represents your entry into Winter.

Up here, the Solar force is waning, while “down under” the Solar force is waxing. Virgo helps the North prepare for Autumn, and the South for Spring. This year the Equinox happened at 12:51 am PDT, 8:51 am BST September 23 when the Sun entered Libra, our birthday sign!

I opened the door to a new way of viewing the signs relative to the season for the two hemispheres in the article The Mirroring of the Northern and Southern Hemisphere Year Cycles in Astrology. If you're down under, please reference the concepts put forth there, since Virgo in the Southern Hemisphere helps you get ready for a new Spring following the consolidation in Leo of the decisions of Cancer (the beginning of Winter). Leo began the "warming up" of your Winter, which then led to the practical adjustments and preparations in Virgo for your Spring.

In this phase of the twelve-step evolutionary process, that which began in Aries, stabilized in Taurus, expanded in Gemini, consolidated in Cancer, creatively projected in Leo and refined in Virgo is shaped into a new collective form or ideal. Libra is symbolically associated with the Scales, showing the weighing and judging function of this sign which always strives for fairness and perfect equilibrium.

In the Northern Hemisphere, this is the apportioning of the harvest, while in the Southern, Virgo marks a time of “preparing the ground” for what we want to see take shape in Libra’s beautiful Spring. For all of us, Libra marks the incorporation of the adjustments of Virgo into a more ideal and beautiful social forms. The power of Leo organized usefully by the discrimination and education of Virgo are balanced and harmonized in more perfect grace of expression in Libra.

We decide some things in Cancer that allow us to re-integrate our personalities toward self-gathering of what we need to ensure us our supply. These all show as new ways of life, self-expression, and enjoyment of how we are connected to doing our being naturally in Leo.

Virgo then shows us how to use the energy of Leo in practical ways that involve discrimination and being educated in precise expressions, preparing us for the archetypal energies to come in Libra. So now, both hemispheres have now made adjustments required by Virgo, and in October experience the balanced initiatives and renewed ideals of Libra.

Libra is self-initiating, interactive, and tries to see all the different points of view in any situation. Whether in the Northern or Southern Hemisphere, the Sun in Libra shines the light of wisdom on how we must be fair, balanced, and well-rounded in our ideal of justice, opening us to living a greater image of truth, goodness, and beauty.

This sign's keywords are "I balance." This is the sign of romance, refinement, and appreciation. Libra explores the archetypes of transfiguration and reconstruction through actions and interactions, adjusting the balance of things.

The new initiatives and possibilities offered in 2005 during the last time Jupiter was in Libra took shape during Saturn’s stay in Libra between late 2009 and late 2012. During that period there were two important conjunctions between Mars and Saturn (1 Libra, July 2010, 25 Libra August 2012) that profoundly impacted us by the emergence of new archetypes of living in Summer 2010 through Summer 2012. It’s rare to have two Mars-Saturn conjunctions in the same sign! During the 2012-2014 Mars-Saturn cycle, we were taught how to see through material forms and understand the “life and death process” surrounding those forms that call our attention.

Just as Saturn crystallized the promise of Jupiter between late 2009 and late 2012, the next time Jupiter was in Libra in 2016-2017 it expanded the structures given to us by Saturn. Whatever we had to learn in the Libra sectors of our charts in 2009-2012 became a truth, vision, or promise in 2016-2017 which is renewed each Autumn when the inner planets transit Libra, with a new iteration in action every two years when Mars transits Libra.

That means each year when the Sun again transits Libra, we find power and illumination by seeing those Saturn lessons in a new light, and especially with our expanded Jupiter in Libra capacity. The Sun conjunct Jupiter at 4 Libra in Sept 2016 also “illuminated a promise” or powered up a vision which is going to be renewed each year for many years to come as the inner planets transit that degree.

This year, Mercury and Venus were the first planets to enter Libra when they both entered that sign on September 14. They were followed by the Sun on the Equinox, and then finally by Mars on October 3. During this time, Venus, the ruler of Libra, entered Scorpio on October 8, bringing the energies of Scorpio to the forefront and creating a mutual reception with Mars. Mars will stay in Libra through Nov 18/19, meaning Libra energy will be present for over two months this year!

Back to the celebration of Libra! As I’m posting this very late in the month, most of the links have been updated.

Mythologically, Libra is in the axis of the Relator, or Lover. This sign (along with its polar opposite, Aries) repotentializes the dance of relationship between self and others begun in Aries. Libra shows us how to be refined and gracious as we interact with others.

It is the part of us willing to dance with others' points of view, seeing other perspectives, and basically just being diplomatic and pleasant. Libra's reasonableness and moderation are healthy antidotes for the stubborn selfish extremism that seems so prevalent today.

Libra, when freed of the traps of superficiality, vanity, extravagance, timidity, indecisiveness, vacillation, impatience, and getting too theoretical, demonstrate a harmonious, cooperative, agreeable impartial consideration for others that brings a greater sense of belonging to everyone involved.

They are born peacemakers and mediators, and see the ten thousand ways we can all get along if everyone just gives a little bit. They are expressive, modest, inspirational, creative, appreciative, romantic and artistic. The sign of Libra has given us some of the greatest icons of history.

Think Mohandas K. Gandhi, master politician, revolutionary, statesman and "mahatma," or Great Spirit. He led his country to independence from Great Britain through demonstrating the practical efficacy of the doctrine of "non-violence," or ahimsa, applied through the power of satyagraha, or "Soul-force."

Albert Einstein, one of the greatest minds humanity has produced, once said of Gandhi that "Generations to come will scarce believe that such a one as this walked the earth in flesh and blood." One of the most effective politicians in history, he demonstrated the practical truth that the way of applied Soul force using non-violent techniques is the most powerful political tool we have.

A Libra icon for the ages is John Lennon the Beatle, global lightning rod of the Vietnam anti-war movement who gave us "All You Need Is Love" and "Give Peace A Chance" along with about a hundred other songs for all time. Gandhi and Lennon's shared politics of non-violence is the only sane way for our world to come out of the fear, hatred, and barbarism that we're subjected to. Paul Simon,another Libra, helped to break down the barriers of apartheid in South Africa while bringing their ancient and beautiful music out for all the world to hear. Libra strives to make a better world, more fair, just, and beautiful for all.

Libra's archetypal nature is easily seen in Lenny Bruce, the standup comedian and social critic beloved by millions for exposing society's hypocrisies while making us laugh. He busted racism, sexism, prisons, movies, social pomposities and even the Lone Ranger. And speaking of Libras who made us laugh, let us honor the icon himself, Groucho Marx, deflater of egos and pretentiousness while making double entendres and raising his bushy eyebrows. Some of the most brilliant satires ever to hit the silver screen were courtesy of this master of the one-line zinger, beloved to this day.

Political Libras who made their mark on the world stage include President, Nobel Peace Prize winner and founder of Habitat for Humanity Jimmy Carter, along with Presidents Rutherford B. Hayes, Chester A. Arthur, and Dwight Eisenhower. In this group we also include political powerhouses William Penn (who gave us Pennsylvania), First Lady Eleanor Roosevelt (who gave us the Universal Declaration of Human Rights and the Rights of the Child), Pope Paul VI, David Ben-Gurion, Lech Walesa, Vladimir Putin, Bishop Desmond Tutu, Juan Peron, and Jesse Jackson. Here a special nod goes out to living Saint, Avatar, manifestation of Divine Mother, and extraordinary healer Sri Amritanandamayi Ma, a.k.a Ammachi.

A special happy birthday goes out to my departed dear ones Gladys Knapp, Ruby Alves, and Arthur Wolfe, as well as the cities of Copenhagen and Vienna and the nations of China, Argentina, Austria, and Japan. Here in America, there are no states under Libra, but it's a happy birthday to the US cities of Riverside (CA), Rock Island (Il), Roswell, Eugene, Rapid City, Knoxville, Waco, and Alexandria.