Emergence: The Crowning Glory
A+ A A- 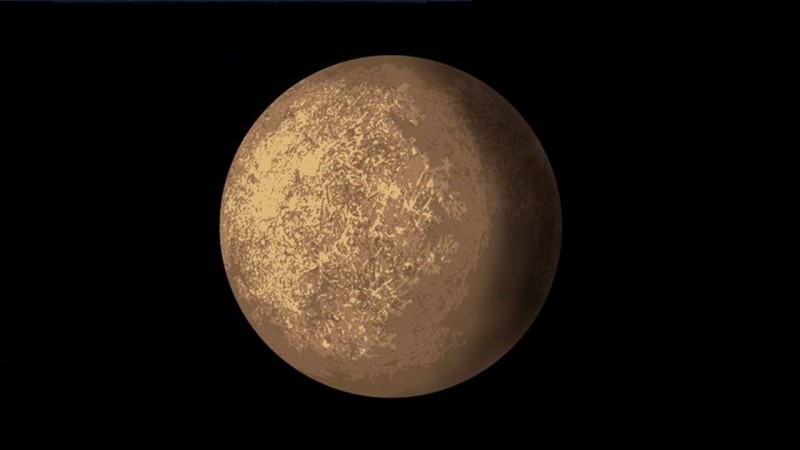 Mercury retrograde is generally associated with communication and technology breakdowns, nervous anxiety, travel delays, and lost items. However, this Mercury retrograde 2019 has a friendly, sociable influence because it sits right next to Venus, the planet of love and peace.

Mercury retrograde October-November 2019 will not be as challenging as other Mercury retrogrades. It should be relatively easy to resolve any communication mishaps because of a prevailing sense of cooperation and harmony.

Mercury enters the retrograde zone on Friday October 11, 2019 at 11°35′ Scorpio [see chart]. During the first shadow period, you will get an idea of the thinking, communication or transport issues that will arise during the retrograde phase.

Mercury conjunct Venus makes Mercury retrograde 2019 the right time to tell someone you love them. It puts you in touch with what you love about a person and makes it easier to share your affections. Other people will also find it easier to show you love and appreciation. You could receive compliments, letters, invitations, gifts or even some money.

Increased social interaction and interpersonal skills make this a good time to ask for favors or to ask someone out on a date. Old friendships can be renewed and new friends made. While Mercury retrograde, in general, may cause some communication difficulties, this aspect encourages cooperation and negotiation. It helps you find peaceful resolutions to any disputes. 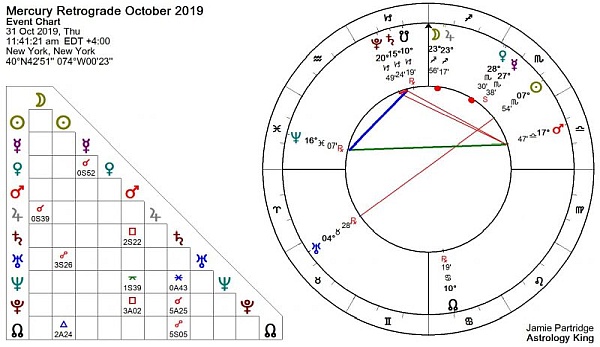 Fixed star Toliman at 29°42′ Scorpio gives friendship, charity, goodwill, refinement and a position of honor and power. [1] But relationships with women may be spoiled, or an existing happy relationship stricken by exceptional circumstances. [2]

Mercury and Venus with Toliman give popularity, benefits from friends, intelligence, business success, and artistic and musical abilities. However, it can make you changeable, indecisive, fault-finding and difficult to please, with danger from love affairs, trouble in domestic affairs through enemies, family sickness, and disappointed ambitions. [1]

Mercury stations direct on Wednesday, November 20 at 11°35′ Scorpio. Like Mercury retrograde, it is also well-aspected and on Venus-like star.

Moon sextile Mercury is good for socializing because you should be in the mood for talking. You won’t have to think about what to say because you are in tune with your feelings and the feelings of other people.

This is also a good time to talk about family and relationship problems because you will feel more sensitive and caring than usual. Others will come to you to share their feelings too. 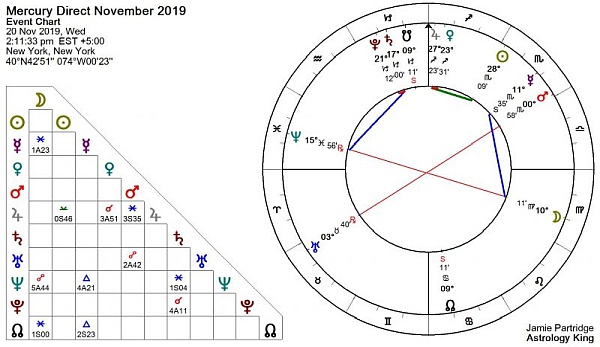 Fixed star Alphecca at 12°33′ Scorpio gives honor, dignity and poetical and artistic ability. With Mercury it gives benefits from friends but also laziness, extravagance and loss by enemies. [1]

Transiting Mercury retrograde is a regular cycle occurring three or four times a year for about 24 days. While this is more frequent than any other planet, Mercury is still only retrograde 19% of the time. This is far less than Jupiter outwards, but more than Venus and Mars.

Mercury retrograde brings communication and technology breakdowns, nervous anxiety, travel delays, and lost items. There is a feel of a difficult Mercury–Saturn aspect to Mercury retrograde. You can also expect to dwell on things, reminisce about the past, or unexpectedly meet up with people from your past. While the Mercury retrograde period might be good for flicking through old photo albums, it is generally considered more of a nuisance than a benefit.

Mercury retrograde can play havoc with your thoughts, communications, travels, and electronics. Take extra care with your words and try not to react too quickly in any arguments or if provoked. Take some time out if you start to feel overwhelmed by the hectic pace. Double-check all of your emails and posts on Facebook before hitting the send button.

Business negotiations will be in a state of flux during Mercury retrograde so avoid signing contracts. Some important details will not yet be available, and others may be unreliable or dishonest. If going on a road trip then make sure you get your car serviced beforehand. The riskiest times for decision-making, negotiations, communication, and transport are the few days either side of the exact retrograde and direct stations. However, care should still be taken during the retrograde period.

Natal Mercury retrograde suggests there may have been a problem with how you thought and communicated in an earlier life. Perhaps you gave someone bad advice that had critical repercussions. Perhaps you were prone to making costly mistakes. Maybe you wrote slanderous material about someone in a book or newspaper, or verbally teased and abused people.

Whatever the circumstances of the previous significant incarnation, you come into this life with those bad memories etched in your soul. You probably don’t recognize them as memories but as déjà vu or unexplained guilt. A repeating theme of challenging events related to your past is likely, especially when young. The aim of Mercury retrograde natal is to perfect those areas of thought and communication which once let you down. As your communication skills improve with experience, your karmic debt will be repaid and you can get off the roundabout.

Natal Mercury retrograde meaning can show as learning difficulties, especially with reading, writing, and comprehension. You could be a shy, quiet person whose thoughts have turned in. Hesitant to speak up for yourself, you may miss out on many opportunities in life. This difficulty in expressing yourself can make you feel awkward in company, and lead to low self-esteem. You may experience teasing or verbal abuse, be nagged and criticized, or fall victim to slander and lies. Contracts may also cause problems and like so many things, lead to complications further down the track.

Mercury retrograde only lasts for about three weeks so Mercury is going to turn direct at some stage in your progressed chart (where one day equals one year). After a couple of years, you will notice that your communication style improves and you can express yourself more freely. However, the opposite can also occur and someone with Mercury direct in their natal chart may experience progressed Mercury retrograde later in life. I experienced this from age 13 to 37 and it was very profound. I even stopped reading books.

What To Do When you are Doing Nothing, Part ONE - The Arcturians

The truth about Truth

Mars in Aquarius in Relationships: March 30th - May 13th - Some Air at last!

The Creator - Stop Squirming And Dig!