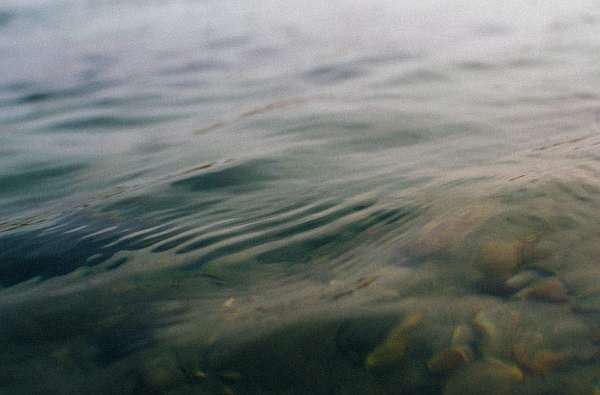 There is one specific message I have been getting constantly and consistently from Spirit as of late, one concept that I have been digesting and mulling over throughout the past few days. One that was spoken through many mouths of unbeknownst oracles, forcing me to pay attention. It’s about flowing as a way of moving through life. Flowing as not merely surrendering to the experience, which somehow suggests an uninvolved approach — but rather, magnetizing it, luring said experience in. Speaking its non-language.

There is nothing cerebral, or convoluted about being in a constant state of flow. On the contrary; flow is sheer motion in its more uncomplicated sense. To flow is simply to move towards life, so that life itself keeps coming. In the end, it all comes down to making sure that we take ourselves with us, wherever we go, while also keeping parts of ourselves in form of obsessive focus and unbeknownst attention from remaining anchored to places we’re leaving behind. Flowing as constant Soul retrieval.

The image of an old cassette tape, like the ones I used to play up until the year 2000 when I finally could afford to buy a portable cd player, keeps forming into my mind as I ponder this notion. In order for the music to be heard, every wave of pressure has to be released gently into the surrounding space as the tape itself moves forward.

I’ve made it a point to release all I can, whenever I can. To give myself the gift of closure. To eradicate everything and anything that is still festering in the back of my head due to me not paying attention at the right time. The self-made prisons created by my lack of self-worth. The conversations I never replied to. The lingering tensions in my relationship due to miscommunication of needs. Releasenot as in avoidance, but as in coming back to it all one last time, acknowledging it, giving it all I can, pulling its hooks off my flesh and letting it take its own route.

This way, I am creating a hollow space that can be filled with what I am calling forth, instead of allowing the mental and energetical clutter to call in more of the same.

If this sounds unfamiliar to you, the upcoming Retrograde station of Pluto might be the right time to start familiarizing with the idea. Pluto stations retrograde  on April 25, at 24°59’ Capricorn, ushering in a phase of intensification of Plutonian themes that we can comply with through accepting and releasing that which is keeping us hostage.

The very fact that Pluto’s retrograde cycles are, statistically speaking, not much of a big deal, because Pluto spends roughly 40% of the time going — apparently — backwards, corroborates the understanding of closure and release as necessary prerequisites to keeping our life in motion. I like to think that everything that has run its course can be devoutly offered as an oblation to our spirits and deities, in gratitude and appreciativeness for everything it taught us.

During the time Pluto backtracks through Capricorn, we can thus dig out the leftover pieces of our recent past, the ones that still hold us captive, the ones we insist on clinging on to even though they are already being pulled away, and mercifully send them to Hades, where they can be transmuted into new growth.

As for us — we will find out, sooner than soon, that it’s possible to survive and to thrive without them, because life is naturally seduced by void and the prospect to flow into it and fill it up. Like an endless river.

If you’d like to explore the significance of Pluto transiting Retrograde in your own birth chart, you can book an Astrology Reading. Tarot Readings are also available!
If you want to support me but don’t want to purchase a service, you can either buy me a coffee or donate via PayPal (see sidebar button). Sharing this post is also appreciated (please give credit)!