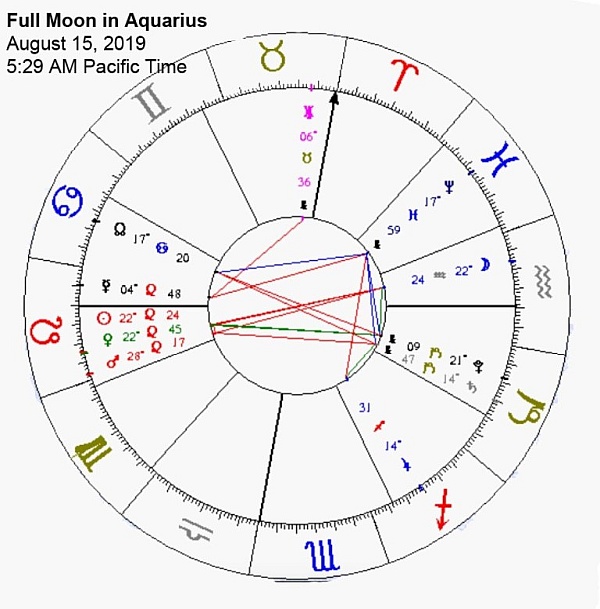 The full moon this month is today at 5:29 AM Pacific Time 8:29 AM Eastern Time. This full moon has some very powerful and beautiful alignments astrologically and numerologically. The Sun is at 22° in Leo, exactly conjunct Venus and closely conjunct to Mars. Mercury is also in Leo at just less than 5°. These are the personal planets, meaning they tell us about what’s happening for us on an individual level not so much for the collective. 22 is, of course, a master number. This full moon is an invitation for us to step into our mastery!

People who have number 22 as one of their core numbers in numerology (like me) will be especially affected by this full moon.

Also people who have the Sun, Ascendant, Moon, Venus, Mars or Jupiter in either Leo or Aquarius are especially affected. Jupiter is on this list because it represents our quickest pathway to the most expensive future. Also the asteroid Juno (wife of Jupiter) is at 25° Leo conjunct Sun, Venus and Mars.

22 is called the Master Builder or Master Organizer. It is able to access cosmic, spiritual energies and information and bring these back to Earth in an organized way to share with others.

The full moon on August 15th presents an opportunity to make a choice for the optimum timeline for yourself, personally. In March there was a choice point at the new moon on the sixth. Then a bunch of old stuff came up and blocked your forward motion as Jupiter and Saturn went retrograde on April the 11th and the 30th respectively. Jupiter started direct motion on August 12the, supporting your ability to travel forward on your path to the greatest expansion.

Saturn will be turning direct on September 18th. Between now and then we have Jupiter supporting our Leo qualities of self-love and self-worth as a Master Builder. Have you been hiding your abilities to see cosmic wisdom? Now is the time to choose to be more bold, even if your life is not “perfect”.

If something has been out of balance or there is an injustice in your life, especially things that have to do with the law, this is your opportunity to bring that situation into balance. Jupiter represents justice and Saturn represents karma. For those who have been wronged you will see justice. For those who have wronged others you will need to pay that karma now.

As you make your choice to right any injustice against you, do it from a place of neutrality, of seeking balance and clean energy. Do not put the energy of revenge and anger into your process.

If there is something that you have ignored, perhaps a situation that you felt you could not handle or something that was out of your control, then now is the time to embrace your courage and clean up this energy. Be completely honest. Own up to anything you messed up in the past.

At the time of the new moon in March, when the original choice point opened up, Mercury was in retrograde and in exact square to the Galactic Center at 27.3° Sagittarius. The Event, the waves of light that remove the dark energy, starts at the Galactic center. Recently scientists have seen huge light pulses coming from this location, previously never seen before. Since Mercury was in Pisces (the end of the cycle) and retrograde or looking backward, it’s like a message was sent to the Galactic Center that we needed to clean up one last bunch of stuff before the Event can happen. This is why so many examples of the negative energy situations and people have been exposed by the light and brought to justice. Think Epstein.

This opportunity is for your personal timeline not the collective one. Remember that your loved ones, human and animal, will go with you on your timeline. The person with the most optimum timeline creates a vortex that pulls in their loved ones. Go for it!

The Full Moon on September 14th closes the window. Saturn is stationing (still) and is about to go direct. When Saturn “wakes up” he looks around to see who is following the rules and who is circumventing the rules. You want to have your act cleaned up by then.

Sarah Biermann has an amazing ability to create a safe and non-judgemental space in which great healing and transformation can take place. With over thirty-five years practicing metaphysics, Sarah has mastered a variety of tools and techniques. She developed ImagiCreation which is a technique that allows you to enter an alternate reality in which you can quickly and easily transform your life.   Email:. Phone: 415-672-1279