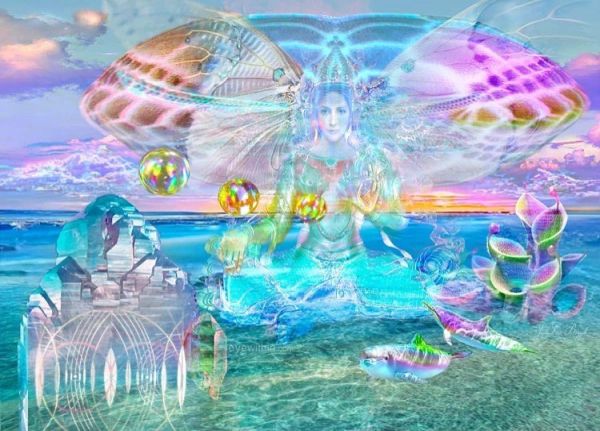 Beloveds, this is a time of deep expansion on your Earth.  As a result of your transits and transitions of the last 6 months, you are now ready to align more fully with Higher Consciousness and Multi-Dimensional experience.

You are now moving into the state of consciousness where you can experience the sixth dimensional frequency level which is associated with magical creation and manifestation.  This powerful frequency is activating changes and transformations in the human brain physiology. The frequency shifts the brain into what is known as the Alpha brain wave cycle, which is activated in humans generally in states of meditation and deep creativity.  This will become a more normal state of being that can be accessed at will in the New Earth.

Now, you may know, that Dolphins have a much larger brain than humans, and that their natural brain frequency is the Alpha.  That is why the Dolphins have come forward to work with you at this time.

Dolphin Dreaming : The Next Level

Dolphins take physical form on the Earth in your oceans, but they also have higher etheric and spiritual forms that are connected to Sirius, the Pleiades and other Galactic and Stellar locations. There are also Angelic Dolphins, known as the “Golden Dolphins” who work closely with the Angelic families, especially the Elohim.

The Dolphins have a very extensive and clear understanding of the Human Hologram and Physiology, and so are able to assist as moments of evolutionary transition like the present moment.

You may have heard of people who swim with Dolphins or work with them and experience powerful shifts and spontaneous healings.  At this time when you are adapting to this deep shift of consciousness, they are stepping forward to help you to adjust to these new frequencies.  They are the Masters of 6D consciousness and are able to hold it in their Earth home.

Dolphins communicate through sound, and the sound frequencies carry compressed information in holographic form.  This information can be downloaded into your cells as Light Codes or Light Language and will help to recode the physical body for the next steps of evolution.

Many of you who are healers, channels and teachers will feel the magnetic attraction to work with these evolved interstellar beings to assist in the emergence of Multidimensional Human Beings who will activate the “Dolphin Brain” or the ability to function in deep states of creative meditation in daily life.

The Galactic Connection : The Whales, Theta Frequency and Whale Songs

Beloveds, the Cosmic/Galactic Whales are also stepping forward to be of extended service to you!  Like the Dolphins, the Whales are both incarnated on Earth and existing in Higher Angelic and Galactic forms.

The Whales are very Ancient Beings and have been part of Earth’s story since the beginning of creation.  They hold the “Song Lines” or Holographic Creation matrix within the oceans and their Songs create new pathways for evolution and expression.  They are also the Keepers of the Earth’s Akashic Records, which is the record of the Earth’s journey through Time and Space.

In their Cosmic and Galactic roles, the Whales function in Theta frequency with their brain. structure which is much larger than even the Dolphins.  Theta is a deep state of consciousness that you would call “deep trance”.  In Theta frequency, you can move beyond material limitations into fluid plasma creation and manifestation, creating holographic worlds that manifest into reality in the New Earth Time Spiral.

This is the next step in conscious evolution, being able to work with the Theta frequency while still in physical form.  The problem for you is that the human brain associates Theta frequency with sleep and dreaming states, and so you struggle to achieve Theta mastery in a conscious way.  The Whales Masters will assist you to learn to hold these energies and become Cosmic Creators. Many of you will feel drawn to work with the Whale Song lines on Earth and in the Galactic spaces in co-creation with the Whales.

Conscious Breathing and Living Between Worlds

The Cetaceans (Dolphins and Whales) are Conscious Breathers.  They live in a fluid medium (water) but they breathe air (gas).  They have to be able to move between these states and to be conscious of their breathing so that they can maintain this awareness and ability to exist between worlds.

Your Ascension Journey and Evolution has taught you to become aware of yourself as existing between worlds, between the Physical and Spiritual.  Now, with this conscious awareness, you can begin to become Masters of Multidimensional awareness as you move between worlds, dimensions and frequencies.

The first Key is Conscious Breathing.  Like the Whales and Dolphins, you will come to understand the link between the Heart, the Lungs and the Pulsations of Cosmic and Divine Light.  You will learn to access different frequencies and levels through conscious breathing techniques that you will learn from the Whale and Dolphin “experts” and teachers.

There is so much to look forward to as you continue your journey of Being and Becoming on your Beautiful New Earth.

I Am Archangel Michael.

We have 689 guests and no members online