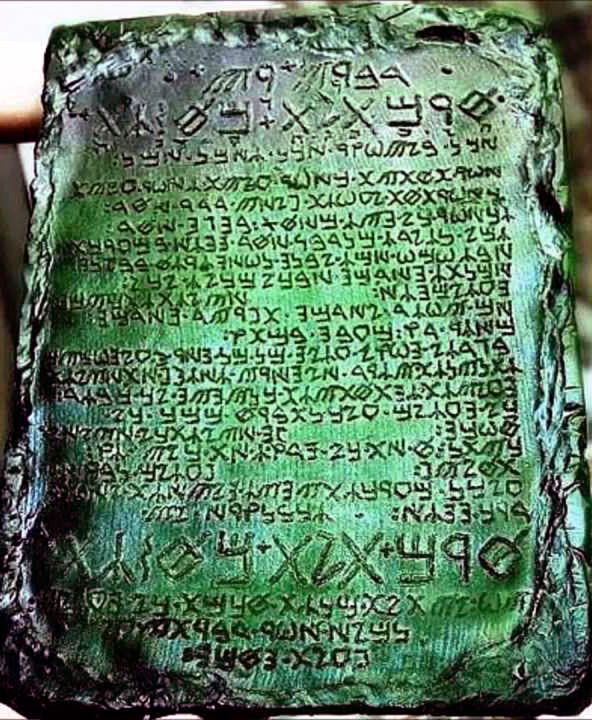 The Emerald Tablet of Thoth, also referred to as the Emerald Tablets of Hermes, is thought to be the work of Hermes Trismegistus ('Hermes the Thrice-Great'), a legendary Egyptian sage or god, variously identified with the Egyptian god Thoth and/or the Greek god Hermes created to chronicle his journeys from the times of Atlantis until the times of Khem (Egypt).

The history of the tablets translated in the following pages is strange and beyond the belief of modern scientists. Their antiquity is stupendous, dating back some 36,000 years B.C. The writer is Thoth, an Atlantean Priest-King, who founded a colony in ancient Egypt after the sinking of the mother country. He was the builder of the Great Pyramid of Giza, erroneously attributed to Cheops. In it he incorporated his knowledge of the ancient wisdom and also securely secreted records and instruments of ancient Atlantis.

The Emerald Tablets of Thoth

Tablet I  Emerald Tablets of Thoth the Atlantean I, THOTH, the Atlantean, master of mysteries, keeper of records, mighty king, magician, living from generation to generation, being about to pass into...

Tablet III The Key of Wisdom

Tablet III The Key of Wisdom I, Thoth, the Atlantean, give of my wisdom, give of my knowledge, give of my power. Freely I give to the children of men. Give...

Tablet V The Dweller of Unal Oft dream I of buried Atlantis, lost in the ages that have passed into night. Aeon on aeon thou existed in beauty, a Light shining...

Tablet VI The Key of Magic

Tablet VI The Key of Magic Hark ye, O man, to the wisdom of magic. Hark the knowledge of powers forgotten. Long, ago in the days of the first man, warfare...

Tablet VII The Seven Lords Hark ye O man, and list to my Voice. Open thy mind-space and drink of my wisdom. Dark is the pathway of Life that ye travel....

Tablet VIII The Key of Mystery

Tablet VIII The Key of Mystery Unto thee, O man, have I given my knowledge. Unto thee have I given of Light. Hear ye now and receive my wisdom brought from...

Tablet IX The Key to Freedom of Space List ye, O man, hear ye my voice, teaching of Wisdom and Light in this cycle; teaching ye how to banish the darkness,...

Tablet X The Key of Time

Tablet X The Key of Time List ye, O Man. Take of my wisdom. Learn of his deep hidden mysteries of space. Learn of the Thought that grew in the abyss,...

Tablet XI The Key to Above and Below

Tablet XI The Key to Above and Below Hear ye and list ye, O children of Khem, to the words that I give that shall bring ye to the Light. Ye...

Tablet XII The Law of Cause and Effect

Tablet XII The Law of Cause and Effect and The Key of Prophecy List ye, O man, to the words of my wisdom, list to the voice of Thoth, the Atlantean....

Tablet XIII The Keys of Life and Death

Tablet XIV Supplementary List ye, O Man, to the deep hidden wisdom, lost to the world since the time of the Dwellers, lost and forgotten by men of this age. Know...