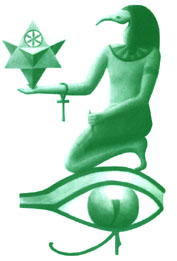 Tablet I  Emerald Tablets of Thoth the Atlantean

I, THOTH, the Atlantean, master of mysteries, keeper of records, mighty king, magician, living from generation to generation, being about to pass into the halls of Amenti, set down for the guidance of those that are to come after, these records of the mighty wisdom of Great Atlantis.

In the great city of KEOR on the island of UNDAL, in a time far past, I began this incarnation. Not as the little men of the present age did the mighty ones of Atlantis live and die, but rather from aeon to aeon did they renew their life in the Halls of Amenti where the river of life flows eternally onward.

A hundred times ten have I descended the dark way that led into light, and as many times have I ascended from the darkness into the light my strength and power renewed. Now for a time I descend, and the men of Khem (Khem is ancient Egypt) shall know me no more. But in a time yet unborn will I rise again, mighty and potent, requiring an accounting of those left behind me.

Then beware, O men of Khem, if ye have falsely betrayed my teaching, for I shall cast ye down from your high estate into the darkness of the caves from whence ye came. Betray not my secrets to the men of the North or the men of the South lest my curse fall upon ye. Remember and heed my words, for surely will I return again and require of thee that which ye guard.

Aye, even from beyond time and from beyond death will I return, rewarding or punishing as ye have requited your truest. Great were my people in the ancient days, great beyond the conception of the little people now around me; knowing the wisdom of old, seeking far within the heart of infinity knowledge that belonged to Earth's youth. Wise were we with the wisdom of the Children of Light who dwelt among us. Strong were we with the power drawn from the eternal fire. And of all these, greatest among the children of men was my father, THOTME, keeper of the great temple, link between the Children of Light who dwelt within the temple and the races of men who inhabited the ten islands.

Mouthpiece, after the Three, of the Dweller of UNAL, speaking to the Kings with the voice that must be obeyed. Grew I there from a child into manhood, being taught by my father the elder mysteries, until in time there grew within the fire of wisdom, until it burst into a consuming flame. Naught desired I but the attainment of wisdom. Until on a great day the command came from the Dweller of the Temple that I be brought before him. Few there were among the children of men who had looked upon that mighty face and lived, for not as the sons of men are the Children of Light when they are not incarnate in a physical body.

Chosen was I from the sons of men, taught by the Dweller so that his purposes might be fulfilled, purposes yet unborn in the womb of time. Long ages I dwelt in the Temple, learning ever and yet ever more wisdom, until I, too, approached the light emitted from the great fire. Taught me he, the path to Amenti, the underworld where the great king sits upon his throne of might. Deep I bowed in homage before the Lords of Life and the Lords of Death, receiving as my gift the Key of Life. Free was I of the Halls of Amenti, bound not be death to the circle of life.

Far to the stars I journeyed until space and time became as naught. Then having drunk deep of the cup of wisdom, I looked into the hearts of men and there found I greater mysteries and was glad. For only in the Search for Truth could my Soul be stilled and the flame within be quenched. Down through the ages I lived, seeing those around me taste of the cup of death and return again in the light of life. Gradually from the Kingdoms of Atlantis passed waves of consciousness that had been one with me, only to be replaced by spawn of a lower star.

In obedience to the law, the word of the Master grew into flower. Downward into the darkness turned the thoughts of the Atlanteans, until at last in this wrath arose from his AGWANTI, (this word has no English equivalent; it means a state of detachment) the Dweller, speaking The Word, calling the power. Deep in Earth's heart, the sons of Amenti heard, and hearing, directing the changing of the flower of fire that burns eternally, changing and shifting, using the LOGOS, until that great fire changed its direction.

Over the world then broke the great waters, drowning and sinking, changing Earth's balance until only the Temple of Light was left standing on the great mountain on UNDAL still rising out of the water; some there were who were living, saved from the rush of the fountains. Called to me then the Master, saying: Gather ye together my people. Take them by the arts ye have learned of far across the waters, until ye reach the land of the hairy barbarians, dwelling in caves of the desert. Follow there the plan that yet know of.

Gathered I then my people and entered the great ship of the Master. Upward we rose into the morning. Dark beneath us lay the Temple. Suddenly over it rose the waters. Vanished from Earth, until the time appointed, was the great Temple. Fast we fled toward the sun of the morning, until beneath us lay the land of the children of Khem. Raging, they came with cudgels and spears, lifted in anger seeking to slay and utterly destroy the Sons of Atlantis.

Then raised I my staff and directed a ray of vibration, striking them still in their tracks as fragments of stone of the mountain. Then spoke I to them in words calm and peaceful, telling them of the might of Atlantis, saying we were children of the Sun and its messengers. Cowed I them by my display of magic-science, until at my feet they groveled, when I released them.

Long dwelt we in the land of Khem, long and yet long again. Until obeying the commands of the Master, who while sleeping yet lives eternally, I sent from me the Sons of Atlantis, sent them in many directions, that from the womb of time wisdom might rise again in her children. Long time dwelt I in the land of Khem, doing great works by the wisdom within me. Upward grew into the light of knowledge the children of Khem, watered by the rains of my wisdom.

Blasted I then a path to Amenti so that I might retain my powers, living from age to age a Sun of Atlantis, keeping the wisdom, preserving the records. Great few the sons of Khem, conquering the people around them, growing slowly upwards in Soul force. Now for a time I go from among them into the dark halls of Amenti, deep in the halls of the Earth, before the Lords of the powers, face to face once again with the Dweller.

Raised I high over the entrance, a doorway, a gateway leading down to Amenti. Few there would be with courage to dare it, few pass the portal to dark Amenti. Raised over the passage, I, a mighty pyramid, using the power that overcomes Earth force (gravity). Deep and yet deeper place I a force-house or chamber; from it carved I a circular passage reaching almost to the great summit. There in the apex, set I the crystal, sending the ray into the "Time-Space," drawing the force from out of the ether, concentrating upon the gateway to Amenti.

Other chambers I built and left vacant to all seeming, yet hidden within them are the keys to Amenti. He who in courage would dare the dark realms, let him be purified first by long fasting. Lie in the sarcophagus of stone in my chamber. Then reveal I to him the great mysteries. Soon shall he follow to where I shall meet him, even in the darkness of Earth shall I meet him, I, Thoth, Lord of Wisdom, meet him and hold him and dwell with him always. Builded I the Great Pyramid, patterned after the pyramid of Earth force, burning eternally so that it, too, might remain through the ages.

In it, I builded my knowledge of "Magic-Science" so that I might be here when again I return from Amenti, Aye, while I sleep in the Halls of Amenti, my Soul roaming free will incarnate, dwell among men in this form or another. (Hermes, thrice-born.) Emissary on Earth am I of the Dweller, fulfilling his commands so many might be lifted.

Know my commandments, keep them and be them, and I will be with you, helping and guiding you into the Light. Now before me opens the portal. Go I down in the darkness of night.