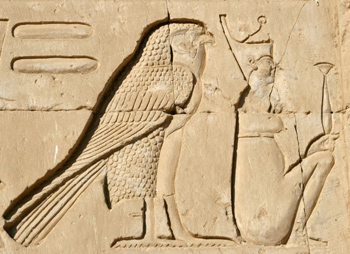 Ancient Egypt concentrated along the River Nile. The civilization began around 3150 BC and developed over the next three millennia. The history of the civilization is divided into a series Kingdoms.

After the end of the last Kingdom or the New Kingdom, the civilization was conquered by a succession of foreign powers and the dynamic rule of the pharaohs officially ended in 31 BC. The civilization of ancient Egypt thrived along the River Nile. They controlled irrigation of the fertile valley and produced surplus crops, which enabled the far reaching social and cultural development. The administration sponsored mineral exploitation of the valley and is credited with the early development of an independent system of writing. The civilization is also synonymous with the organization of collective agricultural projects and extensive trade.

The Egyptian military defeated foreign invaders and asserted Egyptian dominance through the bureaucracy of scribes, religious leaders and administrators under the control of the pharaoh. Their achievements include a system of mathematics, quarrying and special construction techniques that are flaunted by the pyramids, temples and obelisks. They were also advanced in glass technology, effective medicine, irrigation systems and agricultural production techniques. Nile is the lifeline of Egypt and the fertile flood-plain of the river Nile helped the settlers to develop a settled agricultural economy and a centralized society. By about 5500 BC, there were a series of unique cultures identifiable by pottery and personal items.

Merimda was one of the largest northern communities in ancient Egypt. Its lithic technology and culture is characterized by the vases and ring-stands and ladles and the stone maceheads, many of which are on display at the various museums. The earliest southern community in ancient Egypt was called Badari and was known for quality ceramics, the earliest use of copper probably and stone tools. The Badarian burials unearthed indicate that, at some point in time, came under the control of powerful leaders; the visible sign being the social stratification designs of the graves.

To the north of ancient Egypt was Maadi. Maadian pottery was made from the silt of the Nile and is characterized by the birds and designs bearing the early Horus names. Maadi was a commercial center and contact between Lower and Upper Egypt. It played a major role in establishing significant trade relations with Sumer and Palestine. Naqada leaders expanded their control of Egypt northwards. They manufactured painted pottery, decorative stone vases, cosmetic palettes and gold, lapis and ivory jewelry. They also developed faience, a ceramic glaze used to decorate cups and amulets. The Naqada culture evolved written symbols that further evolved into a full system of hieroglyphs.

The ancient Egyptians have their official history on record from the rule of a with a king named "Meni". He is credited with having united Lower and Upper Egypt. However, there is no contemporary record of Menes and scholars now believe that the mythical Menes may have been Pharaoh Narmer. In the Early Dynastic Period, the first pharaohs established their control over lower Egypt by controlling the labor force and agriculture of the fertile delta and the critical trade routes to the Levant. The increasing power and wealth of the pharaohs served to legitimize state control over the land, labor and resources of ancient Egyptian civilization.

The civilization of ancient Egypt has given the world proof of the stunning advances in architecture, art, and technology. Their prosperity was fueled by the increased agricultural productivity, which in turn made possible a well developed central administration. The state officials collected taxes and co-ordinated irrigation projects and established a justice system to maintain peace and order. This led to the establishment of a productive and stable economy. The pyramids are symbols of the ancient Egyptian civilization and the power of the pharaohs who controlled it.

Pharaohs offered land grants to their mortuary cults and local temples which led to the gradual erosion of the economic power of the pharaoh. As the power of the pharaoh diminished, regional governors began to challenge their supremacy and this feud along with severe drought, caused the civilization to enter a 140-year period of famine also called the First Intermediate Period. The ancient Egyptians valued hygiene and appearance. They indulged in aromatic perfumes and ointments. Their clothing was made from simple linen and both men and women wore wigs, jewelry and cosmetics. 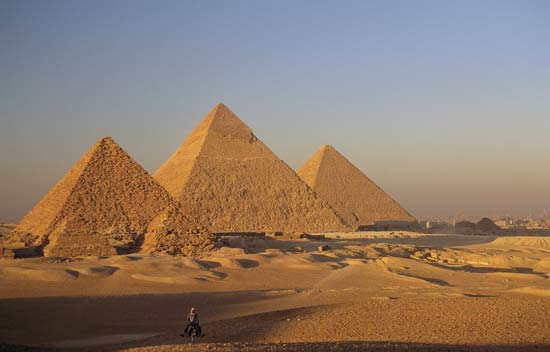 One of the most powerful ancient civilizations is ancient Egypt. Agriculture and trade were the two professions that thrived on the banks of river Nile in ancient Egypt. This article gives a brief insight into ancient Egypt.

Pyramids of ancient Egypt are one of the wonders of ancient world. Pyramids were built as burial place for the pharaohs and their queens. It is also believed a pyramid represented a stairway for the souls of a pharaoh to ascend the heavens.

One of oldest pyramid was the Step Pyramid of pharaoh Djoser who ruled 4,600 years ago. There are corridors in Djoser pyramid, which leads to the burial chamber. This area is lined with Aswan pink granite. The entrance of the pyramid is sealed with granite. The entire pyramid is covered with fine limestone.

Ancient Egyptians considered pharaohs to be gods on earth. There were more than 30 dynasties in ancient Egypt. Pharaohs were thought to be incarnation of gods. The throne was handed over from father to son. However, there are times when the next in heir would be murdered or would disappear mysteriously. In that case a new family take over the control of the kingdom. The history of ancient pharaohs is very complex. One of the famous pharaohs was Tutankhamen or King Tut.