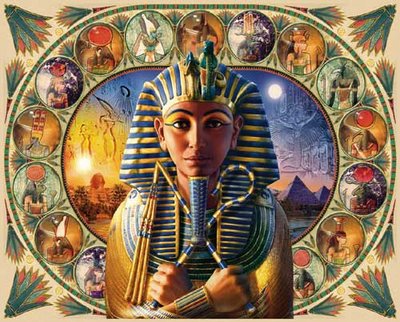 The intriguing story of the boy king. The death of the teenage Pharaoh Tutankhamen leaves many unanswered questions and a very infamous curse.

The world of Pharaohs, mummies and pyramids has always been shrouded in a certain degree mystery. Layers of intrigue have been peeled off to reveal even deeper layers. One of the most interesting of them all is the one that cloaks the life and death of the young Pharaoh Tutankhamen. More than 3,300 years after his death questions are still being asked about the cause of his death and the dreaded curse that is supposed to have ensued.

Tutankhamen lived over 3,300 years ago during the period known as the New Kingdom. The powerful priesthood of the god Amun had controlled vast temples and estates. All that changed during the reign of Amenhotep IV when he renounced the multitude of gods worshipped by the Egyptians and abolished the priesthood of Amun. Amenhotep established a new order to worship the sun god Aten and changed his own name to Akhenaten, meaning "servant of the Aten." It was here that Akhenaten and his secondary wife - Kiya became the parents of Tutankhaten, as Tutankhamen was known at first. He would have spent most of his early years being tutored in many skills, including reading and writing.

After the death of Akhenaten, Tutankhaten became a boy king at the age of nine. He married one of his stepsisters. Soon after this his name was changed to Tutankhamen to indicate the return of the Amun hierarchy. The temples of Amun were restored. It was in the ninth year of Tutankhamen's tenure as king that he died. This would have been the year 1327 B.C. and he must have been in his late teens. The possibility that Tutankhamen did not die of natural causes was first raised around 3 decades ago when an X-ray analysis of his mummy was made by the anatomy department of the University of Liverpool. It revealed that the king might have died from a blow to the back of his head.

A theoretical rounding up of the usual suspects would bring Aye -Tutankhamen's vizier, Horernhab - the army officer, Ankhespaton - Tutankhamen’s wife, Tutankhamen’s cupbearer, and Tutu, a court official into the picture. All of these individuals could have had motives to kill the king. After Tutankhamen’s death it was Aye who ascended the throne and married his wife. Horernhab went on to become king after Aye died. There are rumors that inscriptions found in Tutankhamen’s tomb give clues that it was Tutu who was the murderer. He had a reputation of being a troublemaker. He is at times also credited with the murder of Tutankhamen’s father, Akhenaten. Following Tutankhamen’s death, elaborate burial ceremonies that lasted for 70 days took place.

The story of Tutankhamen’s curse began in 1922 when the British Egyptologist Howard Carter, excavated the tomb. The excavation was funded by Lord Carnarvon. On 5th April 1923, seven weeks after the opening of Tutankhamen’s tomb Lord Carnarvon died. This became fodder for journalists all over the world and all kinds stories began floating around. The lights of Cairo were said to have gone out at the moment of his death. Lord Carnarvon's dog Susie was supposed to have howled and died at the same time. Five months after Carnarvon died, his younger brother died suddenly. Howard Carter’s pet canary was eaten by a cobra. Arthur Conan Doyle, the creator of Sherlock Holmes and a believer in the occult, announced that Carnarvon's death could have been the result of a "Pharaoh's curse". Newspapers began printing macabre curses that were supposed to have been derived from inscriptions on the tomb.

However even the most imaginative believers in the curse could not explain a few facts. Howard Carter, discoverer of the tomb died 17 long years after he first came across the tomb. Lord Carnarvon's daughter and one of the first into the tomb, died in 1980 at the age of about 79. Harry Burton, the official photographer for Howard Carter died in 1940. Dr. D.E. Derry conducted the autopsy on Tutankhamen's mummy. He died almost 50 years after the discovery of the tomb.

The tomb itself was a sight to behold. It took more than a decade to catalogue, remove and conserve the thousands of priceless items found inside.