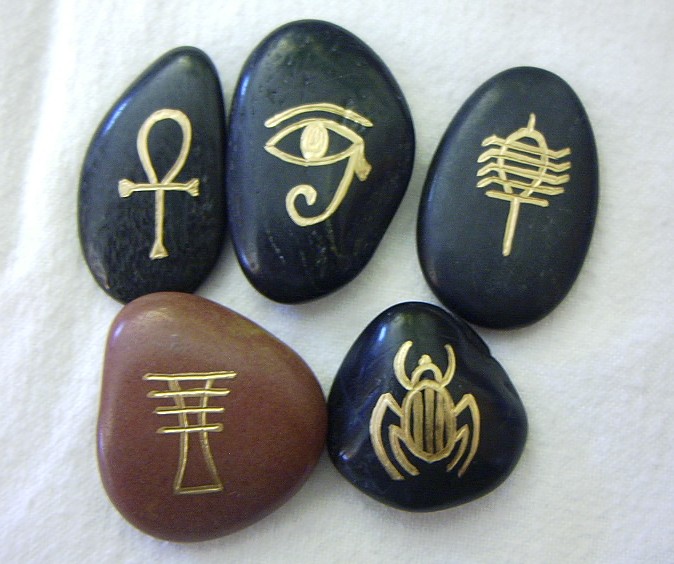 When one talks about Egypt, the pyramids loom large in our imagination. Everything about this ancient civilization is awe inspiring and intriguing. One of the biggest enigmas beside the Egyptian pyramids, was the pictographic script of those people, that is painted and carved extensively on every wall and pillar that the mighty pharaohs built. Archeologists or Egyptologists as they were called later had little clue of what the Egyptian symbols meant until the Rosetta stone was discovered. It provided the first clues of how to decipher the pictographic Egyptian script. Once they got a hang of it, they read off the Egyptian symbols which revealed the intricacies and happenings of their ancient world. It gave an insight into the spiritual and religious beliefs of the Egyptians.

Meaning of the symbol, Amenta underwent changes with time. Earlier, the Amenta symbol meant, the Land of Dead or Underworld. Later, the term was used for horizon of sunset. The sunset observed from the west bank of Nile and burial of dead in the same place led to the symbol being associated with the west bank itself.

This was a symbol that was considered to signify eternal life. It supposedly revealed the enigmas of heaven ands earth. It was popularly known as "Breath of life" and most of the Egyptian gods and goddesses are seen holding an ankh on their lips. Some people also called it "Key of life" and is said to have been made out of the cross of Osiris and the oval that is symbolically associated with Isis. These gods are portrayed as holding the ankh to someone's lips. Meaning of such images is explained as follows: the gods offer 'The Breath of Life' which is needed in the afterlife.

This Egyptian symbol was shaped in the form of a body of a bird and the face of a human. This human headed falcon or Ba as it was known, was the spiritual manifestation of the life force or the soul of a person. The concept of the symbol of Ba is very interesting and it would throw some light on why mummies were made by the Egyptians. Ba was actually believed to be the spirit of the dead man, which left the body at the time of death. Ancient belief was somewhat like this that the Ba returned to the tomb of the dead at night and looked for the individual it belonged to. So to make things easier for the Ba, Egyptians made mummies so that the Ba could rest in the mummy but in case the Ba could not find its mummy, there was also a statue that looked like the mummy for the Ba to enter.

This pillar symbolized the backbone of Osiris in particular and the human backbone in general. It stood for strength and stability and the other mythological allusion associated with it is the creation of Ptah who is at times referred to as the "Noble Djed" but with time as the popularity of Osiris increased, it came to be known as his backbone. Sokar is another God, who is associated with the Djed Pillar. Since it symbolizes Osiris who is the God of Dead, it is often in depicted on coffins but the pharaoh who first carried out the Raising of the djed pillar actually did to imply stability of his rule. So this pillar meant stability in general, it could be stability of the dead in the other world and the stability of the living in this world.

The eye of Horus symbol, also known as Udjat is pictured as the right human eye with markings that usually accompanied the eyes of hawks. This is the symbol of Egyptian God Horus. Known as the son of Osiris and Isis, who were some of the greatest Egyptian Gods and Goddesses, he was the Egyptian God of war, sky and protection. Blue or green amulets bearing the eye of Horus were supposed to protect people from sickness and bring them back to life.

This is a very common Egyptian symbol and "Maat" can be seen very frequently in Egyptian painting and art since the Pharaoh also wore it. Actually it was the feather that adorned a goddess called Maat. It was a common belief of the Egyptians that this feather was kept on the heart of a person after he or she died and if the heart weighed more than the feather it meant that the heart was filled with sins and thus as a punishment he or she was devoured by Ammit but if the heart weighed lesser than the feather, it meant that the heart was free of sins and the person had access to the world of Osiris. Feather of Maat also meant morality, stability, balance and justice and this is the reason the Pharaoh wore it and in case a Pharaoh died it was imperative to choose the next Pharaoh as the belief was that in the absence of a Pharaoh to bear it, the feather would get lost and the world would be tossed into pandemonium.

The heart or Ieb symbol was a surprisingly accurate representation of the heart. Shaped in the form of a vase with arm like openings on both sides, it was a representation of the human heart with its arteries. Egyptians believed that mind and the soul of a person reside in the heart. Popular understanding would call this one of the Egyptian symbols for love, but there is not much evidence supporting this theory.

One of the most important of Egyptian symbols, Ka is shown in the form of two joined shoulders with raised arms. Its symbolism and meaning behind it is complex. It represents the process of reception of life and spiritual forces from the Gods. It also represented the life force or spiritual power that lived within the body of a person and survived death. It represented the spiritual double of a person and it survived as long as the body of the dead person was preserved. That is why, Egyptians started the mummification process to preserve the Ka of the person.

The scarab symbol is represented by the dung beetle. This Egyptian beetle symbol has the following story behind it. The dung beetles would roll the eggs laid by female beetles and bury them in the soil. Young beetles would come out of soil and it would appear that they have emerged from nowhere. This made scarab, the symbol of spontaneous creation.

Shaped in the form of a scepter, this was the Egyptian symbol of power and might. It was used as a symbol of the God Osiris and Anubis. It signified the might of the pharaohs.

This symbol is shown in the form of a circle with a tangential horizontal line at the bottom. It is the Egyptian symbol eternity and the infinite. The shen ring symbolized the eternal circle of birth, death and afterlife.

The symbol shenu, which is also known as cartouche is depicted by a loop which encloses a name. The loop is said to be the protector of name written inside.

This symbol stood for the Eye of Horus and the legend goes somewhat like this that once in a heated argument, Horus’s brother Seth tore out his eye though it was restored later. Though after restoration Horus made a present of his eye to the God of Underworld, Osiris to help him rule the underworld. So it is believed that eye of Horus became the moon. Apart from this legend there are many beliefs that are associated with this symbol, which are as follows:

* It symbolizes perfection, a "whole".

* It symbolizes restoration and healing.

* It also symbolizes the eye of a falcon.

* It also symbolizes magic and intuition.

Some people also believe that it is associated with sun and also with Ra who is the Sun God.

This symbol signifies one of the forms of God Horus Behudety, which is taken up by him for the purpose of a battle. It is a sun disk that has wings and is a common symbol and can be found in most of the cultures of the world. Across all the cultures, which have this symbol, it is actually considered as a symbol of sun. According to Egyptian mythology, God Thoth used his magic to transform God Horus in to a sun disk and then Goddesses Uazet and Nekhbet joined him in the form of snakes at his side.