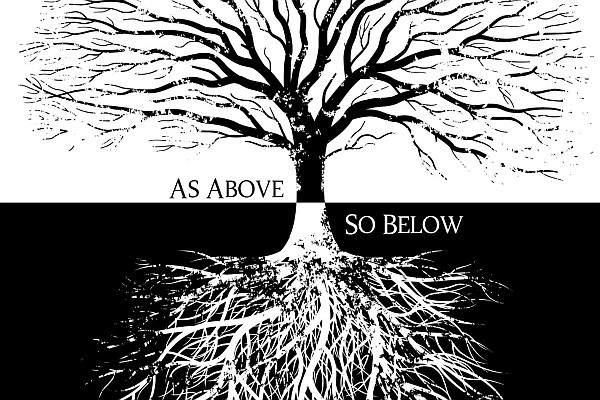 As above, so below is called an occult maxim. The word occult means "hidden," and the word maxim means "truth," or "underlying principle." When Witches seal a circle casting, sacred space or a spell, they often say the words "As above, so below. This circle (or spell) is sealed. So mote it be." That's great but what does this mean? The words As above, so below stem from the mystery traditions of Alchemy, and specifically from an amazing piece of work called the Emerald Tablet.

As along with all things ancient, we have an excellent mystery that goes along with the first mention of written information about alchemy. The credo of the alchemical adepts (As above, so below) supposedly came from an inscription found on an emerald tablet in the hands of a mummy in an obscure pit by the pyramid of Giza, discovered by Alexander the Great. The information was supposedly written on an emerald tablet with a pointed diamond. The emerald was linked to Mercury, and you can see now where the Hermes-Mercury-Thoth association comes into play. The document is called the Emerald Tablet and if you read the words carefully you will slowly understand a large chunk of the mystery traditions, including Witchcraft.

As you can see, the tablet is a bit like a riddle. What is "it" raftered to in its contents? It is said to be referring to thought, I think it may be the Craft.

Regardless of what religion or spirituality you follow, the axiom of As above, so below will apply, and has several meanings depending on your idea of how the universe ticks. For some it means As in heaven, so it on earth. You've probably heard that statement if you've had any sort of Bible study or gone to Sunday school. What heaven decrees, occurs on earth. For others, it means that the invisible and visible are all manifestations of the divine. Everything is one. What happens on the visible plane (right in front of your nose) occurs on the invisible plane (spiritual places of the unseen), and vise versa. There is no dividing line between "what runs the universe" and "human beings." We are God, and God is us, and the material world is an expression of the spiritual one. When Einstein shocked the world by proving that energy and mass are equal, identical, and interchangeable, the old mystery teachings of the ancients found new vigor and he continued to grow. Why? Because now science and spirituality meet on common ground. The ancient conclusion that the same laws operated was now validated. Basically it means: What happens here, happens there; and what happens there, happens here.

The Maxim As above, so below (as well as others you'll study in the future) does tell us that Wicca carries with it into the twenty-first century a heavy coil of very old, very ancient, golden energy.

There is another meaning that goes along with the "as above" statement, and this deals with astrology. The movement of the planets and the position of the stars in the heavens do indeed reflect available energies that we can use or ignore. It is said that the stars do not compel, they impel, meaning that we have free will to use the available energy-or not.

As above, so below also related to Craft terminology that includes the word invocation, raising power, and the cone of power. In these three magickal operations you are focusing upward (in a spiritual sense), sending your thoughts into the spiritual realm. The change you desire occurs on the spiritual planes first, before it can settle into the material one where you are(As above, so below). This is why most people experience a delay in their magickal workings. To get what you want, change must occur. Sometimes the changes are minor (adjustments, really) and so the work seems smooth and quick. Other times the changes you are asking for are much bigger, and several things must happen above as well as below for the working to reach its desired conclusion.