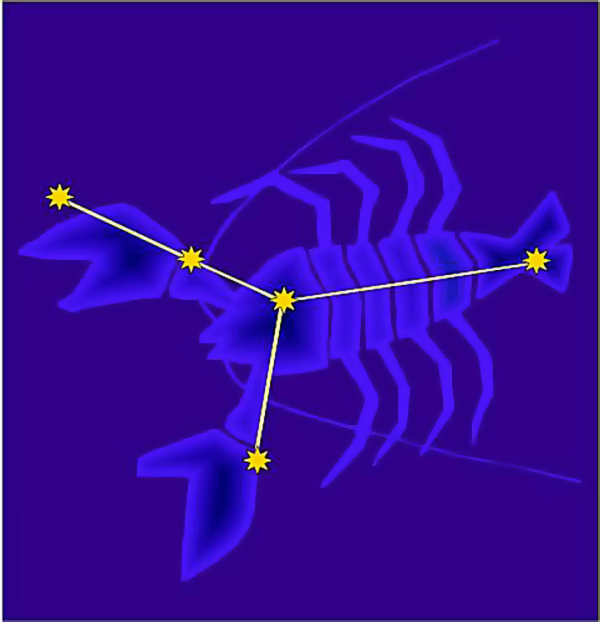 Had the Scriptures of Delphi never been discovered, the mythology of Cancer would be pretty lame indeed.

Up until now, Cancer was identified by the giant crab that Hercules (Greek mythology) stepped on and killed while fighting the Hydra. Never was there a more pathetic character in all of mythology. The crab literally pinches Hercules' toe, to which Hercules just crushes him, and that's the end of that. Supposedly Hera (Greek mythology) felt bad and put him in the sky.

And quite frankly, not a very good story. Luckily, when the Scriptures of Delphi were found, we got a brand new look, and honestly, a much better explanation behind the mythology of Cancer.

According to the Scriptures, a giant crab named Crios guarded the sea nymphs in Poseidon's (Greek mythology) kingdom. He was enormous and strong, and Poseidon himself had blessed him with immortality.

When the god/monster Typhon (Greek mythology) terrorized the gods of Olympus, Poseidon, along with most of the other gods, went into hiding. He left Crios in charge of protecting the sea nymphs, who were considered to be Poseidon's daughters. The crab took his role as protector very seriously, and wouldn't let any of the sea nymphs outside of his reach. After a while, some of the sea nymphs became restless, and convinced that they were in no danger from Typhon, escaped into the open sea.

Crios could not chase them as he was charged with protecting the other sea nymphs, so he enlisted the help of the giant squid, Vamari. Little did he know that Vamari (whose name translates to "Vampire Squid") had ill intentions, and when he caught up to the sea nymphs, he devoured them.

When Vamari returned to Crios, he told the crab that despite a valiant effort, he could not find any of the missing sea nymphs. Crios knew that he was lying and attacked him. They battled for hours until the crab finally won. But he had sustained such bad injuries that he was terribly crippled from that time forward. Since he was immortal, though, he could not die, but had to live in pain.

When Poseidon returned he saw the bravery that the crab had shown and relieved him of his pain, but not his immortality, by placing him in the sky as the constellation Cancer.

Cancer Mythology, What is it about?

In Greek Cancer Mythology, Cancer too owes its life and its destruction, to Hercules. Cancer figures (albeit a minor role) in the legendary 12 Labors of Hercules.

Hera (Queen of Olympus) is the one who sent Hercules to execute the 12 labors (Hera hoped he would die trying); they were his penalty for crimes perpetrated as a youth.

In the end, the crime he committed was because of a curse Hera herself placed on him. In an explosion of fury, Hercules murdered his wife and young boys.

Hera, nevertheless, persisted in hating him.

Hercules' 2nd Labor, was to combat the awful, flame breathing,9 headed, monstrosity of a serpent known as the Hydra.

The Hydra's parents were Typhon and Echidna. Its dwelling was a den that stood near the marshlands of a lake located on Lerna in the Arigolis or (Argolid). The Hydra was there to guard the entry to Hades.

Hera or (Juno) Zeus's wife, didn't like Hercules one bit and wanted him dead.

Hera sent Carcinus a colossus crab to agitate Hercules from his crusade against the Hydra. Hera imagined that Hercules would be too engaged in combat with the Hydra to yield any care to the jumbo crab. Hera also imagined that if the crab vexed Hercules enough, the Hydra would have a chance to end Hercules for good.

As the fight progressed, all the creatures bet on the Olympian. Carcinus came out from a cave and grabbed a hold of Hercules' toe with its pincer, the crab got Hercules' attention after all. For a minute Hercules was unbalanced and almost lost the fight.

Alas, Hercules was only deflected for a second and then he smashed the crab under foot, instant crabmeat.

Hercules returned to the fight and finally killed the serpent.

Hera observed the whole event. Although she wasn't happy, Hera didn't forget the creature that perished at her bidding.

Moved by Carcinus’ allegiance and bravery Hera put the crab in the heavens to commemorate its forfeiture.

As for the Hydra who had been dear to Hera, it too was placed in the sky, near Cancer the crab.

This tale talks of Thetis (the sea goddess). The rumour going around town was that any boys that were born of Thetis would grow up to be more imposing than his father was. Because of this, not one god dared come near Thetis long enough to have kids with her.

Thetis was lovely and likeable, however that didn't matter one bit to the gods; Thetis had to settle for marriage to a human.

Thetis found her mortal, and his name was Peleus. Thetis and Peleus had seven boys.

Thetis was happy, but she couldn't endure the thought of her boy’s eventual demise, as they were human.

In a ghastly act of trying to save them, Thetis started setting them ablaze one-by-one. She imagined that in the course of burning off their flesh her boys would be immortal.

As Thetis was burning her last son, Achilles-- Peleus comes to the scene.

Furious he grabbed Achilles by the ankle joint and plucked him away from his mother.

The section that Peleus's fingers grabbed (the heel) was saved from burning; it remained human. This is the section known to us as Achilles' heel; it remains his point of weakness.

In another variant, the story isn’t so gruesome; Thetis held Achilles by the heel and doused him in the Styx River to make him immortal.