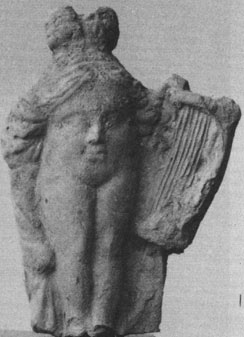 The goddess Baubo: Who is this mystery woman? She is Baubo, a fun-loving, bawdy, jesting, sexually liberated—yet very wise—goddess who plays a crucial, healing role in the Eleusian mysteries of ancient Greece.

She remains a much-honored figure today among many women—celebrated as a positive force of female sexuality and the healing power of laughter. Her power and energy have survived in the spirits of women down through the centuries.

Because of the scarcity of written references—and the contradictory nature of the writings that we do have—she is a mysterious figure in many ways.

Much of the mystery surrounding the goddess Baubo arises from literary connections between her name and the names of other goddesses. Baubo is sometimes referred to as the goddess Iambe, the daughter of Pan and Echo described in the legends of Homer.

Her identity also eventually became blended with those of earlier goddesses, such mother/vegetation goddesses as Atargatis, a goddess originating in northern Syria, and Kybele (or Cybele), a goddess from Asia Minor. To avoid confusion, we shall refer to her simply as Baubo in the rest of this article.

Scholars have traced the origin of Baubo to very ancient times in the Mediterranean region, particularly western Syria. Goddess of vegetation, her later appearance as a servant in the myths of Demeter mark the transition to an agrarian culture where the power has now shifted to Demeter, the Greek goddess of grain and the harvest.

This brings us to the wonderful story in which Baubo and Demeter meet up, as told in the Eleusian mysteries. Baubo is best known from this story, where she appears as a middle-aged servant to King Celeus of Eleusis.

According to the myths, Demeter was wandering the Earth in deep mourning over the loss of her beloved daughter, Persephone, who had been violently abducted by Hades, the god of the underworld. Abandoning her goddess duties of bringing fertility to the land, she took refuge in the city of Eleusis. The disheartened goddess, disguised as an old woman, was welcomed into the home of the king.

Everyone in the king's household tried to console and lift the spirits of the severely depressed woman, but to no avail—until Baubo showed up. The two women started chatting, with Baubo making a number of humorous, risqué remarks. Demeter began to smile. Then, Baubo suddenly lifted her skirt in front of Demeter.

Different versions of this tale provide very different images of what Demeter saw under Baubo's skirt, but whatever she saw, it finally lifted her out of her depression. She responded with a long and hearty belly laugh!

Ultimately, with her spirits and confidence restored, Demeter persuaded Zeus to command Hades to release Persephone. So, thanks to the lewd antics of Baubo, all was once again right in the world.

This inspiring story from the Eleusian mysteries suggests the meaning of Baubo's name. Her name, according to many interpretations, means "belly," indicating the belly laughter that she provoked in Demeter. According to other interpretations, however, Baubo's name means "old crone." Although "crone" has rather negative connotations to us today, the word was originally used to refer to a wise, mature woman.

The "belly" interpretation of Baubo's name is revealed in some ancient figurines of the goddess that have been found in Asia Minor and elsewhere. These sacred objects depict Baubo's face in her belly, with her vulva forming her chin. Other unearthed figurines of Baubo depict her playfully exposing an exaggerated vulva between her legs.

Baubo appeared as Demeter's "sacred fool" in ancient Greece's annual festival of women. At this festival, initiates were taught the profound lessons of living joyfully, dying without fear, and being an integral part of the great cycles of nature—lessons that are at the heart of the Eleusian mysteries.

As the initiates carried sacrificial piglets across a bridge, a gallus (castrated priest) portraying Baubo encouraged them to join him in making lewd comments and gestures (including lifting his skirt) to the assembled crowd. The precise meaning of this lesson to the initiates has been lost in the mists of time, though it undoubtedly had great significance at this festival celebrating the power and sacredness of women. Unfortunately, its meaning is all too easy to misinterpret as simple vulgarity in our modern puritanical, patriarchal society.

Some of what we know about Baubo comes from the pen of Clement of Alexandria. Clement was a Greek Christian writer of anti-pagan rants in the second century of the Common Era. However, his diatribes often contained revealing information about pagan beliefs—mainly in his misinterpretations of the pagan Orphic mysteries of ancient Greece.

The Orphic mysteries reveal that Baubo was married to a swine-herder. That doesn't sound like much today, but it was probably considered quite a lucrative occupation in ancient times. Baubo also had a son named Eumolpos, who is described as a "sweet singer." The high order of priests officiating at the festival of the Eleusian mysteries claimed descent from Eumolpos. High priestesses participating in this festival did as well.

From the ambiguous nature of the surviving information about Baubo, some scholars have concluded that this goddess was perhaps a hermaphrodite—or transgendered in some other way. According to some interpretations of Clement's writings, Baubo, when she lifted her skirt to Demeter, revealed body parts "inappropriate to a woman."

The possibility that Baubo may have had male or male-like genitalia has been suggested as the main reason that Demeter suddenly became happy upon seeing this sight. In ancient times, hermaphroditism had profound religious significance. It represented the unification of seemingly opposite and irreconcilable things—whether those things were male and female or life and death. For Demeter, a woman who was worried that her daughter might be dead, this realization would have been extremely comforting.

The story of Baubo and Demeter can still serve as a great comfort for us. Some women who belong to pagan groups today, for example, join together to appeal to Baubo for the gift of laughter, fun, friendship, and spiritual healing. In addition, certain Wiccan rituals celebrating the diversity of the gay/lesbian/bisexual/transgender community invoke the name and spirit of Baubo.

Of course, you don't have to be a follower of pagan beliefs to discover the joyful mirth of Baubo.

The goddess Baubo is always there to remind us to let our hair down and have fun. She tells us to be proud of, to occasionally flaunt, and to be empowered by our femininity and sexuality. And Baubo reminds us to be sure to let out a good belly laugh every now and then! After all, laughter is one of our greatest gifts from the Goddess!