Gods and Monsters of the Winter Solstice
A+ A A- 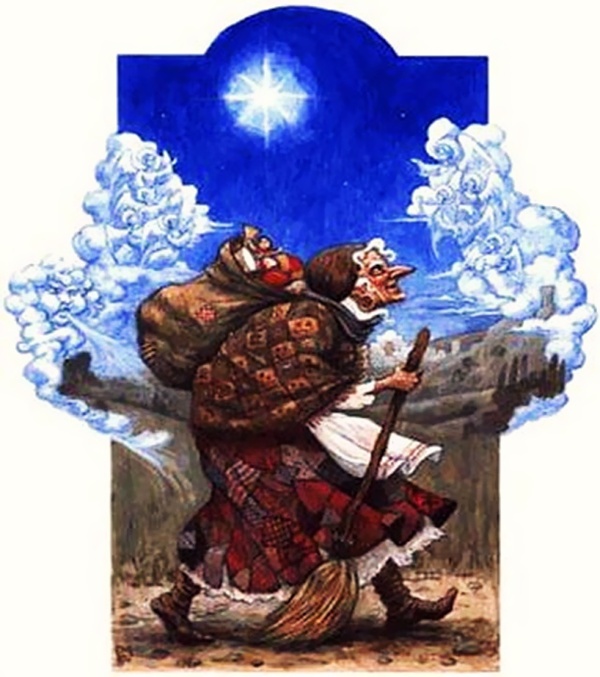 Because Santa Claus has presided over the Yule festival for the last two hundred years, many of us are unaware of the other mysterious beings that visit during the dark days of the solstice season. Benevolent goddesses, formidable gods, and malevolent monsters emerge from the shadows to bless or wreak havoc on us.

Holda, “the gracious one”, reigns over the skies from her crystal palace. When it snows, Holda is shaking her feather bed. Every day she spins at her wheel — the closer to the solstice, the slower the wheel turns. By Yule, her wheel grinds to a halt.

At Yuletide Holda descends from her palace to visit mankind. A tall, golden-haired beauty, she fertilizes the fields as she drives through the countryside. When people are of service to her, she rewards them with gold. Out of respect towards her, no wheels should turn during this period.

From this custom comes the saying: “From Yule Day to New Year’s Day, neither wheel nor windlass must go round.” In the old days, this meant women got a break from spinning; but they still had to keep a neat house, because sloppy workmanship angered the benevolent goddess.

Holda’s dark twin is Berchta, a grey-haired snaggled-toothed hag. Berchta, although not evil, is most definitely on the cranky side. She demands that the wisdom and skills of her and her sister goddesses be practiced with diligence and appreciation by mankind. Her feast day is January 5th. It is a very good idea to eat her feast foods of fish and oat-cakes on this day, so as not to anger her.

Berchta is not the only Yuletide hag. La Bafana, the Italian crone goddess, rides around the world on her broom leaving candies and gifts to well-behaved children. One way to entice her into your household is to place a rag doll in her likeness by your front door or windows.

Baboushka is the Russian counterpart of La Bafana.

The Callieach, Louhi, and Skadi

Though no Yule or Christmas customs are associated with these crone goddesses, the Callieach, Louhi, and Skadi deserve mention — and perhaps a ritual in their honour — at this time. The Callieach, known as the old hag of winter, may be the crone aspect of Bridget. She begins her reign on Samhain. With a giant hammer she strikes the earth. Cracks of frost appear where she’s struck until the earth is covered with ice. Louhi, the Finnish “witch goddess,” kidnaped the Sun and Moon, and held them captive inside a mountain. This was the world’s first Winter Solstice. She was eventually forced to return the celestial bodies and allow the light to be restored. From Scandinavia, we have Skadi, a giantess who married into the Norse pantheon. She invented skis and snowshoes. Pray to Skadi when you find yourself in a dangerous winter landscape.

The mysterious Forest God, with his cloven feet and stag horns, has been known variously for the past four-thousand years as Cernunnos, Enkidu, Priapus, Pan, and the Green Man. Ancient man believed he maintained the balance and order of the seasons. People observed his decline from autumn to winter. He would die then come back to life in the same way as plants.

A ritual of death and renewal is enacted at Yule to dramatize this belief. During the Middle Ages, mummers went from house to house at Yule to pantomime a rough version of this ritual. A burlesque group of figures evolved from the mummer plays. The Forest God took on various shapes: Beelzebub, Johnny Jack, or the Fool, depending on the nature god’s standing in the culture.

Although these figures were rough and hairy with horns and blackened faces, they were intended not only to frighten their audience but to make them laugh as well. His consort, known as the Bessy, was a bearded man dressed in women’s clothing. The figure was a man-woman probably because the hermaphrodite archetype is a powerful fertility symbol. The couple performed a mock-copulation, after which the Fool was mock-killed.

In Norse mythology, Woden acts as the god of the dead and of darkness. Leading the Wild Host, a hunting party of ghosts and hell-hounds, he rides the winter winds. Woe to anyone wandering outdoors at night and hear the barking of hounds and gallop of a thousand hooves, you must throw yourself face down in a ditch. If you’re lucky, the Wild Host will take no notice of you; if you’re not, you may be made to ride with the ghosts to the end of time.

In Greece, the Kallikantzaroi awake when the world turns to darkness. These malevolent figures are half-human, half-animal, sporting tusks, red eyes, and long red curling tongues. Black and hairy, they represent the dark time of the year. Entering through the cellar or down the chimney, they eat all your food, drink your liquor, and break everything they can find. Householders can protect themselves by locking their homes and keeping a stout fire burning in the hearth from Yule until Twelfth Night.

The Swedish tomtes are a gentler race. Under four feet in height, with long white beards and little red caps, the tomtes tidy the house. All they ask for their labour is to be left a nice rice pudding on Yule. If the householder is too stingy to provide the tomte a treat, he simply departs and leaves the business of running a household to the owners.

First New Moon of the Decade

Urgent Message - Are You Hearing The Call? - Auroras & Oraphims

No More Tolerating, Settling, and Compromising

3 Steps to Deepen Your Mindfulness Practice

The Peace Maker by Archangel Uriel