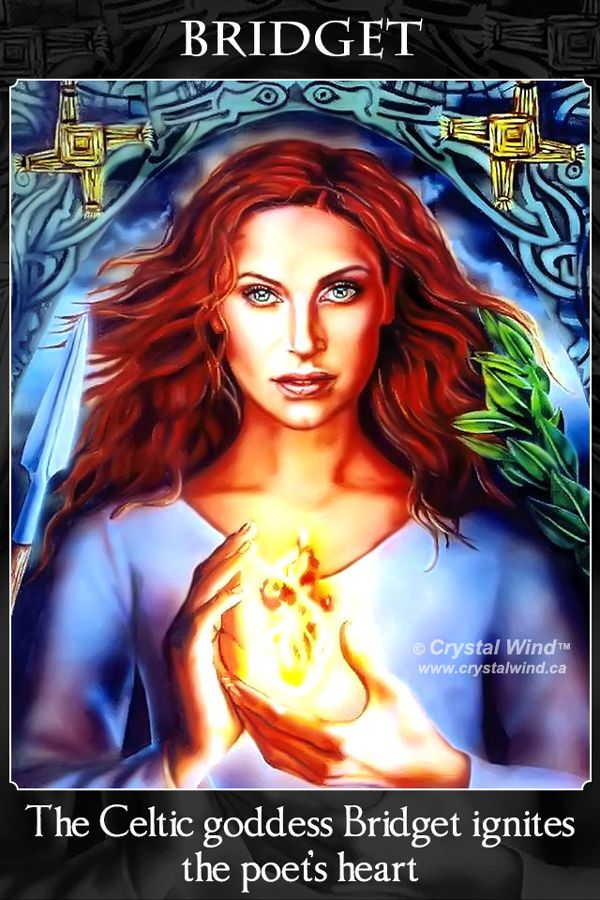 Brigid, the Celtic goddess of fire (the forge and the hearth), poetry, healing, childbirth, and unity, is celebrated in many European countries. She is known by many names, including that of Saint Brigid who is, perhaps, the most powerful religious figure in Irish history.

Here we will relate the myths of the goddess Brigid. The legends of Saint Brigid are equally compelling. Brigid's role as an ancient Triple Goddess and the issue of whether or not Saint Brigid was actually a mortal woman can be found in:

Born at the exact moment of daybreak, Brigid rose into the sky with the sun, rays of fire beaming from her head. She was the daughter of Dagda, the great 'father-god' of Ireland.

In Druid mythology, the infant goddess was fed with milk from a sacred cow from the Otherworld. Brigid owned an apple orchard in the Otherworld and her bees would bring their magical nectar back to earth.

It is said that wherever she walked, small flowers and shamrocks would appear. As a sun goddess her gifts are light (knowledge), inspiration, and the vital and healing energy of the sun.

Brigid became the wife of Bres, an Irish king. Together they produced three sons, each of them became a famous warrior. Brigid and her husband came from two warring tribes and hoped their marriage would end the enmity between their kin.

Unfortunately, it did not. But, as it turns out, the battlefield death of their son Ruadan assured Brigid's role as a goddess of peace and unity.

A major battle between the two families was about to begin.

Brigid's eldest son, using the knowledge of metalsmithing that he had learned from his mother, struck the first blow, killing the smith of the opposing army.  But as the warrior fell to the ground, he managed one last blow before he died and Ruandan was also killed.

Brigid's grief was enormous--for the continual hatred between the two sides of her family and for the death of her son. Her lamentations were so loud they were heard throughout Ireland and so heart-rending that both sides left the battle and forged a peace. The goddess Brigid is said to have originated the practice of "keening".

She is also credited with the invention of whistling, which she used to summon her friends to her side.

Eventually the love and respect for the goddess Brigid brought unity to the Celts who were spread throughout Europe. Regardless of their differences, they all agreed upon her goodness and compassion.

One of the most popular tales of the goddess Brigid involved two lepers who appeared at her sacred well at Kildare and asked to be healed. She told them that they were to bathe each other until the skin healed.

After the first one was healed, he felt only revulsion for the other and would not touch him to bathe him. Angered, Brigid caused his leprosy to return. Then she gently placed her mantle (cloak) around the other leper who was immediately healed.

Ireland is full of springs and wells named after the goddess Brigid. Symbolically, water is seen as a portal to the Otherworld and as a source of wisdom and healing.

There is a saying that Brigid rewards any offering to her, so offerings of coins were often tossed into her wells...the forerunner of the modern custom of throwing a penny into a fountain while you make a wish.

At her most famous shrine Brigid taught humans how to gather and use herbs for their healing properties, how to care for their livestock, and how to forge iron into tools. As a goddess of childbirth and protector of all children, she is the patroness of midwifery.

This shrine, near Kildare, was located near an ancient Oak that was considered to be sacred by the Druids, so sacred in fact that no one was allowed to bring a weapon there.

The shrine is believed to have been an ancient college of priestesses who were committed to thirty years of service, after which they were free to leave and marry.

During their first ten years they received training, the next ten were spent tending the sacred wells, groves and hills of the goddess Brigid, and the last decade was spent in teaching others.

Nineteen priestesses were assigned to tend the perpetual flame of the sacred fire of Brigid. Each was assigned to keep the flames alive for one day. On the twentieth day, the goddess Brigid herself kept the fire burning brightly.

The goddess Brigid was also revered as the Irish goddess of poetry and song. Known for her hospitality to poets, musicians, and scholars, she is known as the Irish muse of poetry.

The Feast Day of Brigid, known as Imbolc, is celebrated at the start of February, midway through the winter. Like the goddess herself, it is meant to give us hope, to remind us that spring is on its way.

The lessons of this complex and widely beloved goddess are many.

The Celtic goddess Brigid lends us her creativity and inspiration, but also reminds us to keep our traditions alive and whole. These are gifts that can sustain us through any circumstance.

Her fire is the spark of life.

The Celtic goddess Brigid and her namesake, Saint Brigid of Ireland, can lay claim to being the most complex, intriguing, widespread, timeless, and beloved of all legendary ladies. Brigid appears in many different guises, with numerous names, in many different European cultures. And she has survived the ravages of time much better than most.

Known as Bride in Scotland, Brigandu in France, Ffaid in Wales, and Brigitania in England, the Irish goddess Brigid (usually pronounced Breet) is also known by the names Brighid, Bridget, Brid, and others. Her varying identities reflect her original image as a triple goddess, but with each of her three faces differing in their gifts.

The Brigid first worshipped in ancient times was the daughter of the great Irish god Dagda, the 'Good Father'. She had two sisters who were also named Brigid. Taken together, they were called the 'Three Mothers', 'Three Sisters', or simply the Goddess Brigid.

Unlike in Greek mythology where the Triple Goddess represented the three chronological stages of a woman's life (Maiden, Matron, and Crone), the Bridgets were all of the same generation and the distinctions between them were based on their domains of responsibility.

Brigid, the 'Fire of the Hearth', was the goddess of fertility, family, childbirth and healing.

Brigid, the '"Fire of the Forge', was like the Greek goddess Athena, a patroness of the crafts (especially weaving, embroidery, and metalsmithing), and a goddess who was concerned with justice and law and order.

Brigid, the 'Fire of Inspiration', was the muse of poetry, song history and the protector of all cultural learning.

Much later, when the Christian church came to Ireland, they had little hope of making converts if they were to denounce the beloved goddess of the Druids as a wicked demon. So instead they made her a saint.  Many of the ancient legends of the goddess were soon to become the deeds of the saint. (Note: Some scholars cite evidence that Saint Brigid was an actual woman, the daughter of a Druid king and his Christian wife.)

In whatever form she might take, Saint or Goddess, Brigid is loved as a goddess of peace and inspiration, one of compassion and generosity, and one who had great gifts of insight and wisdom.

Goddess symbols like those representing the Celtic goddess Brigid were incorporated into the worship of all the ancient goddesses. They were often worn as jewelry and also used in the household decor as talismans to seek the goddess’s special gifts, blessings, or protection.  A large number of goddess symbols have survived in statuary and other works of art.

The goddess Brigid is often represented by symbols associated with light and farm animals.  It is not surprising that many of our icons representing compassion and inspiration are derived from the ancient goddess symbols of Brigid. 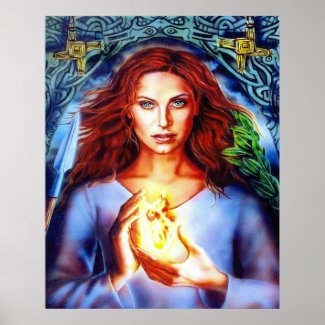