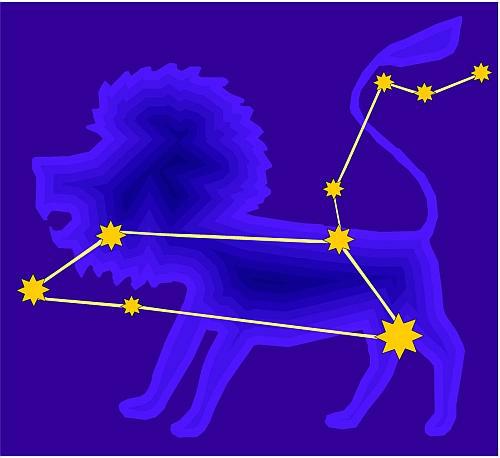 The Constellation Leo myth, otherwise known as the myth of Leo the lion, is one of the more confusing of the constellation myths. The story of this constellation is typically attributed to an ancient story of Hercules (Greek mythology) and his 12 trials.

In the first of his trials Hercules (Greek mythology) is tasked with finding and killing the Nemean Lion - an enormous and powerful lion whose hide is impenetrable. Hercules doesn't know this however and shoots the Nemean Lion with arrows, which do nothing but make it really, really mad.

Being Hercules (Greek mythology), he decides to make a mad dash at the Nemean Lion rather than run away. The lion runs into its cave, which has two entrances. Long story short, Hercules blocks off an entrance, rushes into the cave, hits the Nemean Lion over the head with his club hard enough to stun it, then proceeds to choke it to death with his bare hands.

In order to prove his victory, Hercules (Greek mythology) is supposed to bring the pelt of the Nemean Lion back to King Eurystheus. Hercules tries to cut the pelt off the lion's body before realizing that it's still impenetrable. After trying a few different tactics, he finally figures out that the only thing that can cut the skin of the Nemean Lion is its own claws. Eventually he is able to use the claws to skin the lion. He brings the pelt back to Eurystheus but ends up keeping it to use as his own personal armor.

This is where the story supposedly connects to the constellation Leo myth. It is repeatedly mentioned in different versions of this story that either Zeus (Greek mythology) or Hera (Greek mythology) decide at this point to create the Leo constellation. Why they do this doesn't seem to be either understood nor all that important to the mythographers. Most legends assume that this is done as an ode to Hercules, but if that is the case, why is the Nemean Lion the one that ascends to the stars, which is typically reserved as an honor?

From what I have gathered, the best explanation is this:

That said, it makes sense that Hera (Greek mythology), who sent the Lion to Nemea in the first place, took pity on the creature (or perhaps felt guilty) for it getting hunted down and killed and allowed it to live amongst the stars, next to Selene, the moon goddess, who adored him.

Though the story of Hercules (Greek mythology) and the Nemean Lion is by far the most popular, there are a couple of other possible explanations to the constellation Leo myth.

The Leo constellation is connected in almost every way to the sun. In the zodiac, Leo is a fire sign and represents those born in the summer months. In ancient times, the constellation lined up almost perfectly with the summer solstice. Leo's brightest star, Regulus, was often called the "Red Flame" and was thought to contribute to the heat of summer.

If we go across the sea to Egypt, we can see a different take on the constellation Leo myth. The Egyptians also recognized the Leo constellation and it's champion star, Regulus. In Egypt, though, the constellation had more to do with the river Nile than with a mythical beast.

It's not entirely clear where the Egyptians believed the constellation to have come from directly, but the lion in Egypt is represented as an important animal to the livelihood of the Egyptians. Basically, the Egyptians relied on the Nile river to flood every year and nurture the land for the harvest. During the summer months, the heat in the desert would be so great that the lions of the plains would move closer to the Nile to stay cool and have access to water. This coincided with the river's yearly inundation - an event so crucial to the survival of the Egyptians that festivals were held to the gods regularly in hopes that the inundation would be good. Statues depicting lion heads can be found along building by the Nile.

One other story, which I won't get into too much because it's really not related, is basically the precursor to "Romeo and Juliet", where two star-crossed lovers (Pyramus and Thisbe) decide to run off together, starting with a meeting by a mulberry tree. When the girl gets there, she sees a lion and runs off, dropping her scarf. The guy shows up, thinks that the lion killed his love, so he kills himself. She shows up, sees him dead, and kills herself.

Supposedly, Leo is the lion and the veil is next to it as the constellation Coma Berenices. The problem with this story is that Coma Berenices was invented by a priest under Ptolemy III by taking stars from what was already the tail of Leo. Since other mentions of the constellation Leo myth happen before the creation of Coma Berenices (which was around 240 B.C.), this story is a very unlikely candidate for Leo mythology (though it did wonders for Shakespeare's career).

Leo Mythology, What is it about?

Roman Leo Mythology connects to 12 labors of Hercules. Leo owes its life--and its demise, unfortunately--to the Olympic god and hero, Hercules or (Heracles/Herakles). Hercules enters the Leo Mythology tale when his first task was to put the vicious, giant Lion Nemean to death.

After killing it, Hercules was to bring the pelt of the invincible lion to King Eurystheus. The Nemean Lion was a dreadful brute; he wandered the land of Argolis, terrorizing and obliterating all who came near it in and around the hills of Nemea.

By the way, it is hinted that Selene, (AKA. Goddess Diana/Artemis/Luna/Hecate/Trivia) purposely set the savage free on the people of Nemea in Argolis, they didn’t give her the credit that was due.

At any rate, Hercules' 1st task commenced in a town known as Cleonae, where he rested at Molorchus' house. Molorchus was a poor man. Molorchus volunteered to do a ritual killing of an animal to guarantee safety for Hercules on his hunt. Hercules refused and asked Molorchus to delay the sacrifice for 30 days.

Hercules went after the Lion. The Lion was bigger, more vehement and more potent than other kings of beasts were. The Lion had an advantage -  there wasn’t any wood, metal or stone that was able to perforate its skin.

Not one weapon in Hercules' artillery could slice the lion's skin, in the end Hercules had to use his bare hands to do the deed. They struggled, they wrestled and Hercules at last drove the Lion to the ground and strangulated him.

Thirty days later, Hercules came back to Cleonae to see Molorchus and on his back, he bore the lifeless Lion.

And so, rather than devoting a ritual killing to a dead hero, Molorchus and Hercules offered up a joint sacrifice to Zeus.

Once Hercules returned to Mycenea, King Eurystheus was astonished that Hercules pulled it off. Eurystheus began to dread the sight of Hercules so, the King prohibited Hercules from entering the metropolis.

To avoid Hercules, Eurystheus arranged for a great jar to be forged in bronze and entombed half way in the earth - this would allow him to hide out from Hercules if he ever needed to.

On top of that, King Eurystheus wouldn't see Hercules face-to-face. Eurystheus conveyed his orders about Hercules' succeeding tasks by proclamation.

Hercules saw the unparalleled caliber of the hide; he employed one of the lion's claws to skin the lion. Hercules kept the lion's pelt, and wore it as a cloak; it proved very handy. The Lion's hide made Hercules brawnier than he ever was prior...

It became emblematic to him, establishing in him the character of a lion which helped him in concluding the remaining labors.

Hercules' next job was dealing with the Lernean Hydra, a serpent with 9 heads.

As if fighting something with several heads wasn't plenty, the second Hercules cut one head off the beast would grow two more. Nevertheless, just as Hercules knew it would, the Lion's pelt gave him a protective cover from those annoying heads, while Hercules figured out how to kill it.

Afterwards, Zeus placed the lion in the sky as Leo the Lion.

And so in this Leo Mythology story Nemean the lion was to became Leo. Where he lies, the beast polished off by Hercules passes his time dozing in his lair. In spite of his fangs, Leo is seen as an amiable and tender creature...a caring sire to his cubs and very defensive of his lioness.

The poet Ovid chipped in a different Leo Mythology tale...

Ovid said that Leo is the lion that figures in the sad story of the lovers Pyramus and Thisbe.

One day while talking, they made a pact to converge outside their city by a mulberry tree with lily-white berry fruit. When Thisbe made it to the tree, a lion leapt out from the shrubs all-fired up and bloody from a killing.

Thisbe hightailed it in fear. Unluckily, her veil flew to the ground as she escaped; the lion swooped in and snatched the veil in its mitt. A little while later when Pyramus got to the mulberry tree, he saw Thisbe's veil all bloodied and interpreted that to mean she’d been killed.

Tormented and not able to go on without her, he committed suicide by his own blade. Just at the instant that Pyramus took his dying breath, Thisbe ran back and threw herself on Pyramus’ dead body. Lovelorn she grabbed the blade and pierced it into her own body.

The white mulberries were coloured crimson by Pyramus and Thisbe's bloodshed.

The mulberry tree with the crimson coloured mulberries have stayed that way ever since. Some say that Zeus placed Thisbe's veil in the sky as Coma Berenices, drifting down near Leo the Lion.