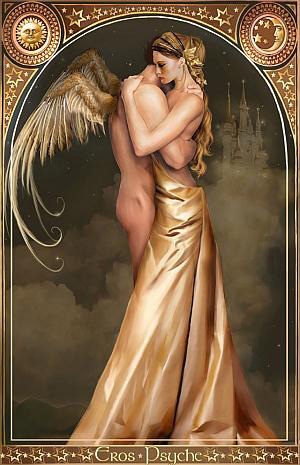 The Greek goddess Psyche, strictly speaking, wasn't a natural-born goddess . . . she got there by "marrying up". But talk about mother-in-law problems, not to mention having a "mama's boy" for a husband! You'd be hard pressed to come up with a story that tops that of the Greek goddess Psyche's.

The goddess Psyche started out as a mortal, but one of exquisite grace and beauty. Fervently courted by numerous mortal men and gods, Psyche truly wasn't interested in romance and she wasn't just playing hard to get! This offended Aphrodite, the goddess of love, who decided to bring Psyche down a notch by sending her son Eros, the god of love, to shoot her with one of his magical arrows tipped in an aphrodisiac that would make her fall hopelessly in love with the first man she saw, no matter how wretched, unsuitable, or unappealing he might be.

But as the Fates (the Greek goddesses responsible for luck and destiny) would have it, just as Eros had Psyche lined up in his sights, Eros stumbled and accidentally pricked himself with the arrow and fell madly in love with Psyche himself.

Reluctant to face mama with the news of what had happened, Eros whisked Psyche off to his palatial hideaway in the mountains for a quick wedding and lengthy honeymoon.

Afraid that he might be recognized and word of his bumbling might get back to Aphrodite, Eros visited Psyche only after dark and made her swear she would never look at him. She was beginning to love him deeply and growing more curious each day about her beloved's features. Psyche decided to take just a quick peek while he lay sleeping, but a drop of hot oil from her lamp accidentally spilled on his shoulder, waking him . . . but not before she saw that he was more beautiful than any many she'd ever imagined.

Another version of the story, probably the original version of "Beauty and the Beast", was that she was persuaded by her sisters, who were jealous of her good fortune in marrying into such wealth, to stab him as he slept since he surely must be a "monster" to be so fearful of her seeing him, and that he awoke to find her poised over him, knife in hand. Regardless, Eros was upset by her lack of trust and her betrayal and flew back home to mother and made a full confession.

Psyche missed him enormously. Abandoned and bereft, she decided to go to go and humble herself before Aphrodite, begging for her blessing on the marriage and for the return of her husband. Aphrodite, however, saw this as her opportunity to take her revenge. She demanded that Psyche complete four tasks, each of them more frightening and difficult than the previous, if she were to prove herself worthy of marriage to her son.

First, Psyche was to spend the night in a room filled with assorted grains and to have them all sorted and bagged by daybreak. Realizing the enormity of the task, Psyche huddled in the corner weeping, when an army of ants took pity on her and came to her aid, getting the job done for her well in advance of the deadline.

Next Psyche was ordered to bring back the Golden Fleece belonging to a fearsome ram that had already killed several heroes who had tried to acquire his fleece. Terrified that she too would be crushed, Psyche took the advice of a nearby reed that whispered to her to wait until nightfall when the ram slept before entering the field and to gather the fleece that had fallen off the ram and clung to the branches of the blackthorn trees.

For her third task, Aphrodite gave Psyche a crystal jar and demanded she return with water taken from a waterfall positioned on a high cliff on the River Styx, the entrance to the underworld. In the depths of despair when she arrived and saw the tremendous danger involved, Psyche was amazed when an eagle, circling above her, swept down for the jar and flew off to the waterfall to fill it for her.

The future goddess Psyche's last and most frightening challenge was to descend into the underworld, the kingdom of the dead, and to return with a box of sleeping potion from Persephone, the Queen of the Underworld, all the while ignoring the pleas for help from all the unfortunate that she encountered. This task was her longest and hardest: she succeeded, but Psyche was so exhausted by the effort that she took some of the potion for herself. Finding Psyche in a deep sleep and unable to rouse her, Eros rubbed the potion from her eyes and returned it to the box which he sent on to his mother.

Deciding, finally, that he'd had quite enough of his mother's meddling in his affairs, and that he truly loved Psyche, he humbled himself and sought expert advice to save their marriage. He flew to Zeus, who upon Athena's advice, made Psyche immortal (a Greek goddess in her own right). Their marriage, legitimized by the king of the gods, was now restored. Even Aphrodite had to admit they made a fine couple and gave them her blessing.

The myths of the Greek goddess Psyche exemplify a woman's search for authentic personal growth, a reminder that the integration of our experiences, however sad or frightening they may be, matures and transforms us, like the symbol of the butterfly emerging into the light from its dark cocoon.

Psyche is often represented by symbols associated with her brave search for truth and understanding. It is not surprising that many of our icons representing spirituality and healing are derived from the ancient goddess symbols of Psyche.

Perfumes/Scents: Floral scents, almond, lily of the valley, and mulberry