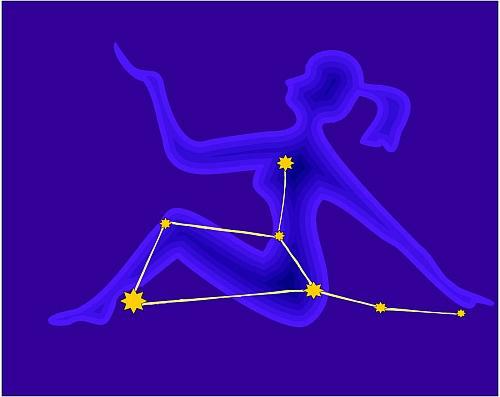 In all of constellation mythology, few legends are as misunderstood as the Virgo myth.

By most accounts, the typical interpretation of Virgo mythology is a series of goddesses from various cultural mythologies that combine to create the myth of "Virgo the Virgin". I believe, however, that this view is inaccurate.

The word "Virgo" is Latin, means "self-contained" which for us is better interpreted as "self-sufficient". In astrology, those born under the sign of Virgo are said to behave in an individualistic, self-sufficient manner. Their nurturing comes from a place of not needing others to find fulfillment for them, but being able to create for others because they can already create for themselves.

The virgo myth should not be interpreted as a woman who is a virgin, but rather a nurturing woman who is a mother to all of the earth. Immaculate conception aside, we all know that mothers can't also be virgins.

So why the confusion? Part of it is a long-standing misinterpretation of the word itself. In fact, I am willing to bet that other mythologists reading this are already preparing a fiery debate about whether or not I am interpreting the virgo myth correctly based mostly on the assumed meaning of the word. I mean, "Virgo" sounds like "Virgin", so they must be the same thing, right?

I don't think so. By all accounts, Virgo is seen as the "Great Goddess", which is a somewhat vague description to begin with, though very accurate. A look back at the history of the Virgo myth across cultures suggests reasons as to the change in how a "Great Goddess" would be viewed.

Most of the goddesses who were linked to Virgo were considered fertility goddesses, or goddesses of the harvest. This resonates with the view of Virgo being the caretaker of mankind through her fertility. This includes Ishtar (Babylonian mythology), Isis (Egyptian mythology), Ceres (Roman mythology), and Demeter (Greek mythology). The constellation Virgo is thought to be a woman holding a spike of corn, thus reinforcing the Harvest Mother mythology.

The story of Ishtar (Babylonian mythology) is similar, except that it was her husband Tammuz (the god of the harvest) who was taken to the underworld where she followed only to be trapped there as well.

Interestingly, many of the other mythological female figures who were believed to represent Virgo include Dike (Greek mythology), Astraea (Roman mythology), and Erigone (Roman mythology), all of whom represented Justice. Once you realize that Libra (the scales of justice) is the next sign in the zodiac following Virgo, suddenly things begin to make more sense.

But there is another explanation. From early Babylonian mythology, the grain goddess Nidoba is often considered to be the first incarnation of Virgo, which is consistent with the view of Virgo being the self-sustaining, life-giving caretaker that most Virgo mythology follows. However, over time, worshipers of Nidoba moved toward the worship of god Nabu (Babylonian mythology) instead. Nabu is the god of wisdom and justice.

Myth of Virgo the Virgin

So where does the myth of "Virgo the Virgin" come from?

Many goddesses who are linked to Virgo mythology are assumed or considered to be virgins, though it is unclear whether the confusion over the meaning of the word "Virgo" is the reason why.

There is also a myth about a young girl named Parthenos (Greek mythology), who died young and was placed in the heavens (presumably as a constellation). The Virgo constellation would be the only fitting place for Parthenos, whose name happens to literally mean "virgin".

So now we have three sets of goddesses said to represent Virgo - the Harvest Mothers, the Ladies of Justice, and the Youthful Virgins.

Logically, virgins cannot be mothers, though when you get to Christian mythology, we have the virgin Mary giving birth to the messiah, which further confuses things. The fact is, mythology is far from being science, and as such, these things can happen quite easily. All you have to say is "it's the will of the gods" or "it's a miracle", and that is all the explanation that is necessary.

One could argue that all three of our Virgo groups could be considered "self-sustaining". The virgin Spring goddesses help create life, while Ishtar is often linked to Virgo mythology and is the Babylonian goddess of procreation. Similarly, our Ladies of Justice were known to be nurturing as well. Astraea, the Roman goddess of justice, was the last of the celestial beings to leave Earth, and only after she was tired of taking care of a humanity that insisted on destroying itself.

Astraea is perhaps the most interesting character involved in the Virgo myth, as she is a virgin, represents justice, and was a caretaker of humanity. After leaving Earth, she is said to have been "placed in the heavens", which is most likely why some mythologists believe her to be the constellation "Virgo" itself. Many mythologists suggest that she became the constellation Virgo and her scales of justice became the constellation Libra. This is a good argument, though one could argue that she, in combination with her scales, could have become Libra, not Virgo, though she represents them both in certain ways.

All things said, Astraea is easily the strongest contender for the character represented in the Virgo myth. This idea was reinforced in the Scriptures of Delphi, in which Astraea is described by name as the Virgo constellation.

What is Virgo Mythology about?

Virgo Mythology is hard to specify, there are so many maidens spread across mythology. It has been associated with nearly every prominent goddess. There are too many stories to tell here. I have included the ones that are most known.

Linked to Virgo are the myths of Isis, Ceres, Astraea, Demeter, Ishtar and Mary (Mother of Jesus).

In Babylonian Mythology the Virgo constellation was known as "The Furrow", representing the goddess Shala's ear of corn or ear of grain.

One star in this constellation, Spica, retains this tradition as it is Latin for "ear of grain", one of the major products of the Mesopotamian furrow.

The constellation was also known as (Akkadian "Absinnu") and (Sumerian "Ab.sin") meaning- the Furrow. Virgo and fertility are linked because of this.

The Babylonians also linked Virgo to Ishtar, Goddess of Procreation, who went down into the Hades to recover her spouse, Thammuz, God of harvesting, Thammuz had been kidnapped by King Winter and carted off.

Roman mythology linked this constellation with their goddess of wheat (Ceres), She is the roman counterpoint to Demeter. We probably most link this disguise to Virgo.

In ancient Roma, Virgo described as Proserpine (tantamount to the Greek Persephone), the Wheat-Bearing Maiden, who was the beautiful daughter of Ceres and Jupiter.

In Greek Virgo Mythology, Astraea ("star-maiden") was a daughter of Zeus and Themis.

Astraea and her mother Themis were both incarnations of justice. Astraea was the last of the gods to live with humankind in the halcyon years. As humanity became sinful, Astraea left because humans no longer seemed to uphold justice.

She rose to the skies to become the constellation Virgo; the scales of justice Astraea held became the nearby Libra.

Some say that the Virgo constellation stands for the Virgin Mary, Mother of Jesus.

The glyph of Virgo is linked to the Immaculate Conception, it looks like Virgo is branded with the letters “MV” or “M” (for “Maria Virgo” or “Virgin Mary” or “Mary”). In the middle age historic period, Virgo was linked with the Holy Virgin Mary.

At some point in Virgo Mythology, Scorpio's claws were taken from Scorpio and bound to Virgo the Virgin as her scales. This earned Virgo the blindfolded goddess of Justice moniker that we know her as today.