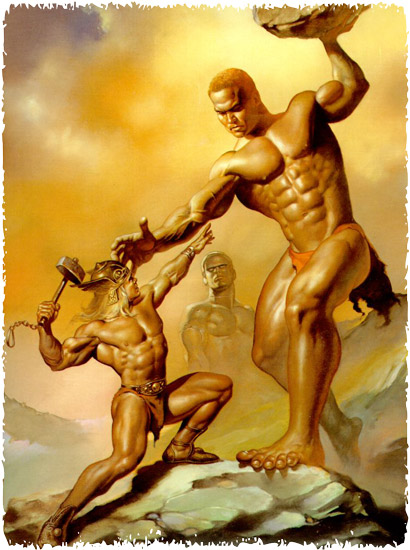 Thor is the mighty God of the Norse mythology who was famous for his ire. He was revered by the Germanic tribes that lived in the Nordic countries before and during their Christianization. Known as the God of Thunder, he was believed to ride his chariot and strike down his enemies by the thunderbolts released from his powerful weapon, the Mjolnir.

Thor was the most powerful of all the Aesirs which refers to the family of all the Gods and Goddesses of the Norse Mythology who lived in Asgard. He was the son of Odin, the patriarch of the Aesirs and Jord, the Goddess of the Earth. Norse or Scandinavian Mythology refers to the myths of the Germanic people of the pre-Christian times. Thor was a highly revered God. He occupied a central place in almost all the myths and stories of the Norse Gods that the Germanic people believed in right since the ancient times till the Age of the Vikings.

Thor, the God of Thunder

Thor was portrayed as a big, powerfully built God with flowing hair and a red beard. He had fiery eyes and was believed to enjoy food and drink. He carried the Mjolnir, a short-handled hammer in one hand which was considered a true manifestation of the God himself. A number of artifacts representing the Mjolnir, that became the symbol of Germanic Paganism have been unearthed by archaeologists from various sites. It was also used by the Germanic tribes as a defiant symbol of their religion during the Christianization of Scandinavia. Thor wore Megingjard, a belt that provided him strength and a pair of iron gloves that helped him wield the hammer. With one strike of the hammer Thor could throw lightning bolts at his enemies and kill them. The Mjolnir was believed to return to Thor after it struck down its target.

According to the Norse people, Thor ruled the air and governed the lightning, thunder, wind and the rains. He was believed to ride through the heavens during thunderstorms in his famous battle chariot drawn by the two goats, Tanngnjóstr and Tanngrisnir. Thor could cook and eat the goats when hungry and with one strike of his hammer he could revive the animals and start his onward journey.

Thor lived in Bilskirnir, a hall in the kingdom of Thrudheim with his wife Sif and their daughter Thrud. True to the might of the God, with 540 rooms, his abode was the largest building in the whole of Asgard. Besides Thrud, Thor had a son Magni with his mistress Járnsaxa, the giantess. He had another son Modi. However, Modi's mother's identity is not clearly known. 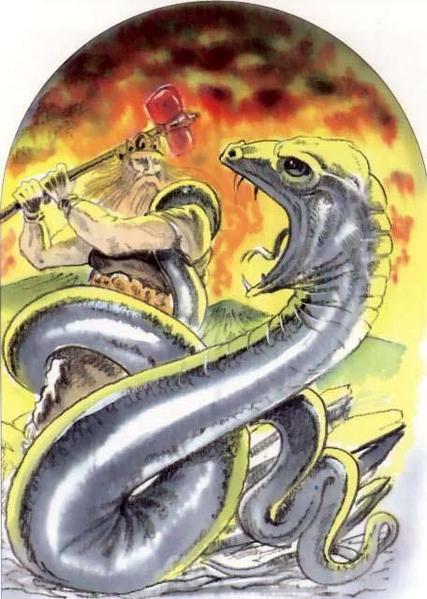 Just as is the case with all Gods, Thor has a number of stories and myths associated with him. Of all of them, the one about Thrym stealing his Mjolnir is most popular. As legend goes, Thrym, the King of the Thurse, a race of giants, stole Thor's famous hammer. On discovering the theft, Thor went with the news of the loss of his hammer to Loki, a giant who had become the blood brother of Odin. Armed with the Feather-Robe given to him by Freyja, the Goddess of Love and Beauty, Loki spoke with Thrym about Thor's missing hammer. Thrym admitted to have stolen the weapon, but agreed to return it if only Freyja married him. On hearing this, Freyja became furious and refused to help the Aesirs. The Gods suggested that Thor dress up as Freyja and meet Thrym. Thor refused to do so as that would be an antithesis to his image of a powerful God. However, when Loki reasoned that if the Mjolnir would not be retrieved from Thrym, he would use it to annihilate all the Gods, Thor agreed to meet Thrym disguised as Freyja. Loki also agreed to accompany him as Freyja's girl servant. In the kingdom of the Thurse, as soon as Thrym placed the Mjolnir on Thor's lap, the Thunder God struck with it and killed all the giants.

Thor is believed to have met his death at the hands of Jormungand, the Midgard Serpent. During Ragnarok (a series of events when many of the Norse Gods died), Thor met Jormungand, his sworn enemy. Thor killed the giant serpent in the fierce battle that ensued. However, no sooner had he taken nine steps away from the dead snake, he dropped dead from its venom.

Thor was believed to be the protector of the Gods as well as the whole mankind. Despite his short temper, he was the first God that the Norse people prayed to for protection. Although popularly known as Thor, he is also known by various other names among the different Germanic tribes. Thor was worshiped by the followers of the Norse religion who were spread over most of Europe before the advent of Christianity. However, the Thunder God survives with us till today as the fifth day of the week - Thursday, which derives its name from the mighty God of the Norse.