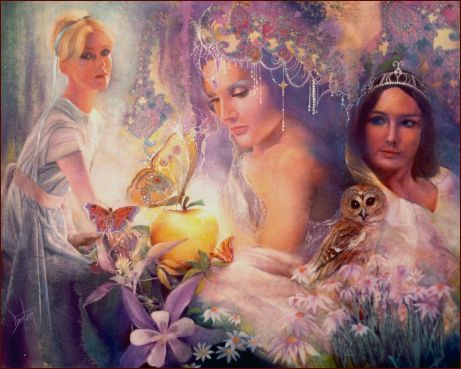 The Greek goddess Aphrodite, the original "Golden Girl", perfectly attired for the occasion in a simple string of pearls and a couple of strategically placed scallop shells, stepped out of the ocean on the island of Cypress and set the ancient world on its ear.

Aphrodite, goddess of romantic love had finally arrived! Never had there been such sensual beauty and impeccable taste. The other Greek goddesses now had their work set out for them . . . a new standard had been set, and the world would never be the same! Henceforth there would be candlelit dinners, heart-rending arias in operas, high-heeled shoes and bright red lipstick (not to mention soap operas). Romance was here and planning to stay.

It is not clear how the Greek goddess Aphrodite (also known as the Roman goddess Venus) came to be "sea-born". One legend was that Aphrodite was the daughter of the Titan Uranus, formed from his genitals that had been severed and tossed into the sea by his son Cronus who was in the process of usurping his father's throne.

What is certain is that her arrival caused quite a stir! Every Greek god and goddess was dying to meet her. The Horae (Hours) welcomed her to step ashore and adorned her with the finest gold ornaments and cloth, then brought Aphrodite to Mount Olympus to present her to Zeus and the other gods and goddesses.

To his credit Zeus instantly realized that this captivating creature could become the source of all sorts of trouble, her radiance stirring every man's passion and leading to constant fighting for her attention. To head off this possibility, Zeus decided she must be married at once ("taken off the market", so to speak) and awarded the goddess to his son, Hephaestus, god of the forge. It goes without saying that Hephaestus must have thought himself the luckiest man alive, especially since he was lame and "no great looker" himself. But he was reliable and hard working.

Overjoyed with his good fortune in acquiring this stunning bride, Hephaestus did his best to please Aphrodite, designing and creating for her the most beautiful jewelry and furniture that had ever been seen. He even went so far as to make Aphrodite a magical golden girdle that made her irresistible to men when she wore it. Whatever could he have been thinking?

Of all the imaginable pairings of Greek god and goddess, this one had to be the worst mismatch possible. Needless to say, their marriage had its ups and downs. Aphrodite, goddess that she was,  felt she had married below her "class" since Hephaestus was decidedly "blue collar" even though he was a god . . . he was not at all what she, with her impeccable taste, had in mind. Aphrodite insisted upon an "open marriage" (at least for her) and indulged in numerous love affairs with both mortals and other gods.

Except for a few occasions when he was overwhelmed with jealousy or resentment, Hephaestus seemed to accept this arrangement, happy to just have and hold her when he could. Indeed, their marriage seemed companionable, with little passion perhaps, but little conflict as well.

It was as if everyone recognized that Aphrodite had one gift and one gift only . . . to make love. And that one gift was so special that no one seemed to resent it. While all the other gods and goddesses had lengthy lists of divine duties to perform, the goddess Aphrodite was assigned only one . . . to bring love into the world.

Athena once caught Aphrodite weaving and reprimanded her for encroaching upon Athena's area of responsibility. Aphrodite was quick to apologize and vowed never to do any work ever again!

Although they were surely envious of her beauty and her exciting but easy life, other women weren't usually jealous or resentful of her charms. Although none were what could be called really close friends, they found her to be quite friendly and extraordinarily generous. She even went to the extent of loaning Hera her magic girdle to help her keep Zeus' wandering eyes where they belonged. The goddess Aphrodite was always ready to help both the deities and mortals to win the loves they sought.

The Greek goddess Aphrodite, however, is best known for her own love affairs, which were numerous and varied and resulted in many offspring by her various lovers. Her most notable lovers were the gods Ares, Dionysius, Hermes, Poseidon, and the mortal, Adonis.

You'd think the other Greek goddesses would have been green with envy, but the willingness of the community to suspend their norms for the goddess Aphrodite is clear. Her flagrant affair with Ares, the god of war, was obvious to all and the cause of much embarrassment for her husband. Hephaestus fashioned an invisible net made of bronze and captured them in it while they were in bed together.

Hauling the pair in front of a jury of the Olympians, he demanded their punishment. Reluctant to get involved, the court instead chided Hephaestus for being silly and giving Aphrodite an outfit that rendered her irresistible in the first place!

Although the goddess Aphrodite seldom seemed very serious in her affairs, one love caused her great suffering. She had begged Adonis, her beloved mortal, to give up the dangerous sports he enjoyed because she could not bear to lose him. But Adonis ignored her advice and was killed by a wild boar while hunting. When he died, Aphrodite heard his cries and hastened to his side in her swan-drawn chariot. She cursed the Fates that had ordained his death and, with Adonis still in her arms, turned the blood drops that fell from his wounds onto the soil into windflowers, also known as the short-lived anemone, as a memorial to their love.

Aphrodite's most famous son was Eros, the god of love, who helped her with her work. A talented archer, his job was to shoot arrows dipped in Aphrodite's love potion, hitting her unwitting victims, causing them to fall madly in love with the next person they saw. Many of the great love stories began this way, but many respectable homes were broken up as well.

Although she was most often loving and generous, Aphrodite could be quite malicious and vindictive as well. She insisted upon being given the honor she felt was due her and was quick and harsh in punishing those who weren't sufficiently appreciative of her efforts. Ares, Medea, Psyche, and Atalanta, to name but a few, could attest that the Greek goddess Aphrodite's power was immense.

Often the punishments rendered by the goddess Aphrodite, though severe, held important lessons embedded within them. These were lessons that sparked growth and ultimately improved the life or extended the vision of the person she was punishing, as in the case of Psyche.

The influence of the Greek goddess Aphrodite can be seen as generative, far beyond that of romance, love, or desire alone. She is associated with the life-giving sea. Just as the waves lapping on the shore refresh and renew the beach, Aphrodite brings us hope and the awareness of the transforming power of love and beauty.

Many of the goddess symbols come from the legends surrounding a specific goddess and were "characters" in her story. Other goddess symbols were derived from the rituals used  in the ancient rites of worship of these pagan goddesses.

Aphrodite's goddess symbols are often those associated with her spectacular entrance from the sea. It is not surprising that many of our icons representing love, passion, and romance are derived from the ancient goddess symbols of the goddess Aphrodite.

Meditations to Invoke the Goddess Aphrodite

Aphrodite, help me to not constantly compare myself to others.

Goddess of love, remind me that I don't have to have a partner to be in love, that  I can be happy in love with life itself.

Your joy is infectious, Aphrodite. Help me to share it with others.

Aphrodite, let me be like you and share my joy and laughter with others to help them celebrate life!

Share your ability to recover from setbacks quickly with me, Aphrodite, so that I can move forward to the next challenge in my life.

Aphrodite, remind me to set my worries aside for a while and to be lighthearted today.

Great Goddess, I rejoice with you in all acts of pleasure and love.

Thank you, Aphrodite, for helping me to be friendly, optimistic, and cheerful today.

Aphrodite, I join you in taking delight in the success and accomplishments of others.

Aphrodite, show me how to release the limits I impose on myself.

I call on you, Aphrodite, to help me develop my true talents by accepting who I really am.

Aphrodite, as the goddess of love, help me to take in the love that others offer to me.

Goddess, I reaffirm that I am a sensual being.

Great Goddess, help me to remain centered and emotionally available to others.

Share your forgiving, nonjudgmental approach with me today, Aphrodite.

Aphrodite, remind me today that, like you, I am caring and have a good heart.

Goddess, guide me to friends who add fun and lightheartedness to my life.

Goddess of Beauty, teach me to bring pleasure into my home and my workplace with objects of remarkable beauty.

Aphrodite, help me find ways to overcome displeasure with my own body and learn to love and enjoy it.

Great Goddess, help me celebrate the powers of my femininity today.

Goddess, I accept responsibility for my happiness and for meeting my own needs.

Aphrodite, lend me your ability to reveal the true self without being ashamed or afraid.

Goddess of love, help me to keep my environment peaceful and harmonious today.