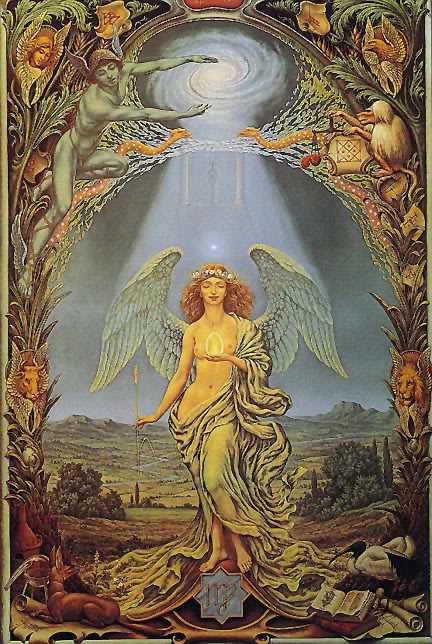 Astraea is a minor but important goddess from Greek mythology. Known as the "Star Maiden" or "Star Goddess", she is best known for being the last immortal to live among the humans on Earth before leaving in disgust of humanity's brutality and wickedness.

There are arguments about who her parents are. She is the daughter of either Zeus and Themis or of Eos and Astraeus. She is often depicted as a winged woman, carrying a torch and the scales of justice. She is also said to have helped Zeus in battle, and is sometimes portrayed carrying his lightning bolts with her.

Astraea is most often associated with two of the major constellation myths, those of Virgo and Libra. While there is much debate about her role in Virgo mythology, I believe that she is the most likely candidate for the role of Virgo. Whether she is or isn't the figure of the Virgo myth, she is definitely very closely connected to both Virgo and Libra mythology.

Though often called "the virgin goddess", Astraea is best known as a goddess of Justice, along with Dike (Greek mythology) and Erigone (Roman mythology), with whom she is often interchangeably mentioned. When she left Earth for the heavens, she essentially took the "Golden Age of Man" with her. Later literature inferred that once humanity realized what it had done, they hoped for her to return, inferring that she would bring the Golden Age back with her. This is notably similar to the "return of the messiah" in Christian mythology.

Some believe that Astraea's image is the portrayed on the "Justice" card in the major arcana of the tarot. There is reason to believe that this is true. In the most famous rendition of the card's artwork, a winged woman carrying a torch and thunderbolts stands beside the throne of Zeus. The name "Astrape" is inscribed above her.

Though not one of the most well-known the Greek gods and goddesses, the Star Maiden's influence has lasted throughout the years. Greek epics and English literature refer to her in poems over several centuries, including one by Ralph Waldo Emerson.

In modern mythology the image of Astraea is re-imagined in the video game "Demon's Souls" published by Atlas Software in 2009. In the game, a character named "Maiden Astraea" rules over a land of sickness and disease. She is a beautiful, powerful, and once noble woman whose soul has been corrupted by demonic spirits and has charged herself with taking care of those living in the uncivilized, plague-infested land. This re-imagination combines the images of the goddess Astraea with the role of the immortal monster Echidna, who is also an important mother figure in Greek mythology. Whether this was intentional or not, it serves as an interesting example of ancient mythology transformed into modern mythology.