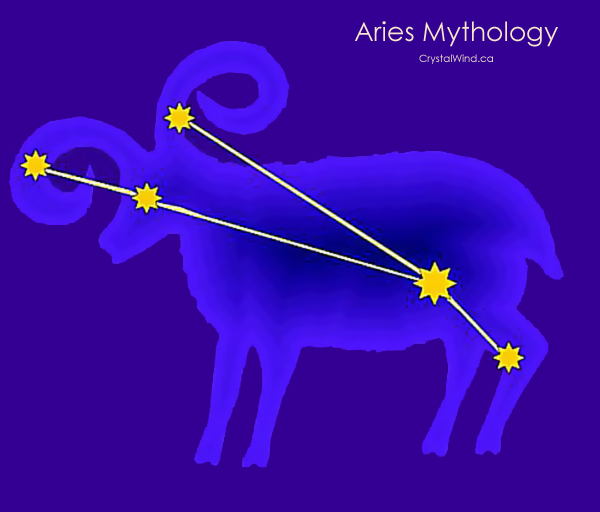 The Mythology of Aries

Having these two Greek gods represent the two different sides of war is very telling as to how the ancient Greeks viewed war. If Athena was Napoleon then Ares was Rambo.

Ares was known for his lust for blood, his chaotic nature, and his thoughtless aggression.

Interestingly enough some of these characteristics (to a much lesser extent) are attributed to those born under Aries, the Ram, in astrology.

Aries, the Ram, is a constellation of stars visible from earth that appear in what the Greeks thought to be the shape of a ram's head. The mythology of Aries comes from the story of Jason and the Argonauts, whose main quest was to find the golden fleece of Aries the Ram in order to prove himself to be the rightful king of Iolcos in Thessaly.

The ram Aries has nothing to do with the god Aries (Ares), despite the fact that they are both based on Greek mythology and they share the same name. The god Ares was most often shown as a dog or vulture when in animal form, though one of his more famous exploits involved him turning into the shape of a boar to kill the beautiful Adonis (Greek mythology), who was in love with Ares' lover, Aphrodite (Greek mythology). He was not known to take the form of a ram.

Ares myths are essentially the same as the myths of Mars from Roman mythology, who is most often considered to be the same god.

Aries Mythology: The Ram that was Golden.

Aries, the Ram, is the first of the zodiac constellations.

The King of Croneus, named Athamas and wife number one, named Nephele (whose name stood for "Cloud"), had two kids: a boy named Phrixus and a girl named Helle.

King Athamas grew bored and sick of Nephele; King Athamas sent Nephele away and hooked up with Ino, daughter of Cadmus, the King of Thebes. Ino was exceedingly envious and of acrimonious when it came to the King's children, Phrixus and Helle, particularly the boy, Phrixus.

Ino had a sneaky plan: to cause the corn crop to go bad.

Ino persuaded the women of the land to roast the seeds of corn prior to the men sowing them into the ground. The men were ignorant of this horrible sabotage.

Once the undermined crop refused to sprout, not one person guessed that the queen regnant Ino was the mastermind behind the catastrophe, so no one accused her.

King Athamas sent messengers to the Oracle at Delphi so he could ascertain what he could do to pacify the deities make it right again.

The devious Queen Ino prevented this by greasing the palms the courier sent by her the King. Ino told the messenger to tell the King that the oracle said there was to be a ritual killing of the prince Phrixus and the population would evade famine.

The King was desperate so, he complied.

While King Athamus was sorrowful for the doom to be visited on Phrixus and Helle, he couldn't allow his people to go hungry.

The King resolved to abide by what he thought was wise advice from the oracle. The boy's mother, Nephele implored King Athamus to save their son but couldn't convince him.

Nephele posted a guardian to keep an eye on Phrixus and Helle. This guardian wasn't human, but a ram whose wool was golden.

The ram had been a present to Nephele from Hermes and the creature was completely devoted to queen Nephele and her children Phrixus and Helle.

Regrettably, when the ram passed over the of body of water between Europe and Asia, Helle dropped to her demise (the place she fell is still called Hellespont or Dardanelles) but Phrixus her brother made it to his refuge on the shore of Colchis that stood at the east end of the Black Sea.

This is where King Aeetes (son of Helius and brother of Circe) welcomed Phrixus with benevolence and gave Phrixus Chalciope, his oldest daughter to marry. Because he was so thankful, Phrixus killed the golden ram to honor Zeus Phyxius (Zeus as the god of flight).

Phrixus presented the gilded fleece to King Aeetes. The king had the wool placed in hallowed brushwood, defended by a horrendous flying lizard that never slumbered.

(It was from there that Jason and the Argonauts swipped the golden fleece.)

Phrixus and Chalciope had four sons Argus, Melas, Phrontis and Cytisorus, they would take on a minor role in the legend of the Golden fleece.

But, in this Aries Mythology story; Zeus placed the ram's likeness in the heavens to immortalize the ram for its courage as the constellation Aries, and there it glistens to this very day.

Pelias thought the Argo had sunk. When Jason returned, Pelias still refused to give up his throne.

Hera hoped Medea would kill Pelias. Medea tricked Pelias daughters into killing Pelias. Medea told the girls that she could turn an older ram into a young ram by cutting it up and stewing it. While boiling the old ram, a fresh youthful ram jumped out of the pot. All worked up, Pelias' girls hacked their father into bits and cast him in a pot. Pelias didn't make it.