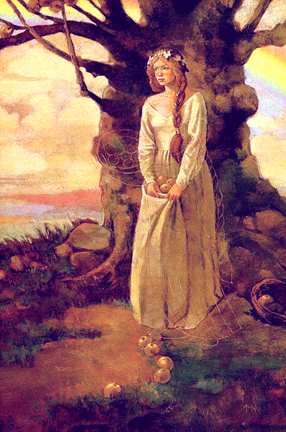 Idunn is the goddess of eternal youth and is the wife of Bragi, the god of poetry. Idun keeps the golden apples that maintain the eternal youthfulness of the gods. Since the gods are not immortal, the apples are considered very precious.

One summer day, Ódin, Loki, and Hœnir were walking across Midgard. Hungry at the end of the day, they came upon a herd of oxen. Loki slaughtered one while Ódin and Hœnir built a fire. After roasting the meat for what seemed like a long time, the meat was just as raw as when they put it in the fire.

A large eagle perched in a tree observed all this and proposed a bargain. If the gods would let the eagle eat first, the ox would be cooked.

The gods agreed, seeing no alternative. The eagle swooped down and snatched the lion's share of the ox from the fire. Landing nearby, the eagle began to eat greedily. Loki was so angry at the theft of their evening meal that he rammed his staff into the eagle's body.

The eagle flew off at great speed. Loki found to his dismay that the staff was firmly lodged in the body of the eagle and that he was unable to release his hands from the staff. The eagle flew low enough to make certain that Loki's ride was uncomfortable. His legs banged into boulders and he was nearly ripped in two.

Loki begged for quarter. The eagle said he would release Loki only if Loki would swear to bring Idunn and her apples out of Ásgard. Now, Loki knew that the eagle could only be a giant in disguise. Crazy with pain, he swore the oath. 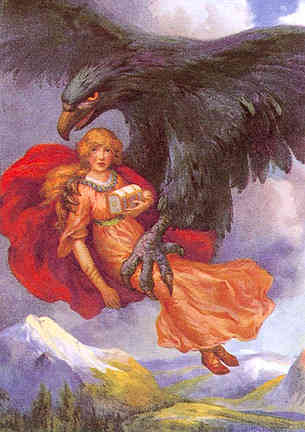 Back in Ásgard, Loki convinced Idunn to travel with him to Midgard. The giant Tjazi, again wearing an eagle skin, swooped down and carried Idunn and her apples off to his castle in the mountains of Jötenheim, land of the giants. Here, Tjazi alone would enjoy the apples.

Idun's absence was quickly noted in Ásgard. Without Idun's apples, the gods and goddesses began to grow old and gray, and their powers declined. Gathering his remaining strength, Ódin called the gods to council. Someone remembered that Idunn was last seen with Loki. The gods sought out Loki and bound him, demanding that he find a way to return Idunn and her apples or else face death at the hands of the gods.

Loki agreed to make the journey to find Idunn and her apples. Using a hawk skin to fly, he traveled to Tjazi's castle in Jötenheim, where he found Idunn alone, huddled over a smoky fire. Saying the magic words, he turned Idunn into a nut. Grasping the nut between his claws, Loki flew off, back to Ásgard.

Tjazi, returning to the castle from fishing, found Idunn gone. He knew that only one of the gods could have stolen her back. He donned his eagle skin for a third time, and flew to give chase.

Back at Ásgard, the gods could see the hawk struggling to outrun the eagle. Realizing the situation, they piled wood shavings and kindling against the wall of Ásgard. Loki and Idun flew over the wall as the gods ignited the wood. The eagle could not avoid the flames, and his wings were destroyed. He fell to the ground in torment, and the gods quickly killed the eagle.

Loki threw off the hawk skin. Picking up the nut, he spoke the magic words again. Idunn moved among the aging gods and goddesses, offering them the apples that would restore their youth. 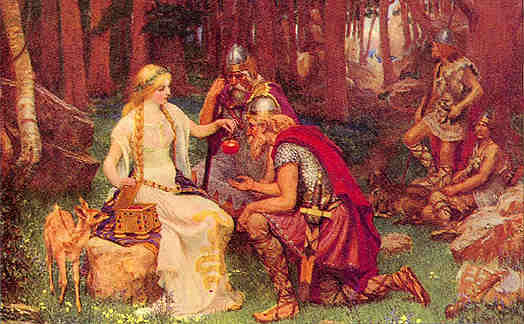