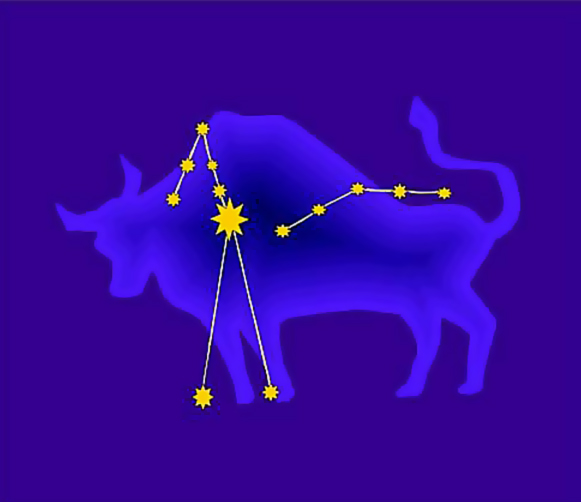 The Taurus myth is most often interpreted as the story of Zeus and Europa, where the Greek god carried the Phoenician princess away to Crete to marry her by disguising himself as a white bull. Then I guess the bull, that was really Zeus, became the Taurus constellation, but not really, because now the bull and Zeus are different... or something.

The Scriptures of Delphi give us another possible explanation of the Taurus constellation, one that I find a bit more satisfying.

According to the Scriptures, the mythology of Taurus begins with a wandering bull known as Cerus. Cerus was a large and powerful bull who villagers were terrified of because of his tendency to trample their villages to pieces on a whim. He was owned by no one, and none of the farmers knew where he came from. Though he was not immortal, most people assumed him to be because of his sheer size and strength and the fact that despite all of the destruction he caused nobody was ever able to stop him.

The bull is wild and out of control, choosing to follow his emotions on a whim. One day the Spring goddess Persephone (Greek mythology) finds him trampling through a field of recently-bloomed flowers and goes to him. Though he cannot speak, he seems to understand her and her presence calms her. They form a bond together, and the bull learns to behave himself. Persephone teaches the bull patience and how to use his strength wisely.

Taurus Mythology, What is it about?

This Greek myth is one of the most familiar to us this myth recounts the story of a snowy white bull who embodied none other than Zeus in camouflage.

This specific legend touches on how Zeus went gaga over Europa, the daughter of King Agenor of Tyre, (a city in Phoenicia) and his Queen, Telephassa.

Aware that his appearance would stun and frighten the lovely Europa, Zeus disguised himself as a white bull with tusks of mother- of-pearl and a silverish moon adorning his lock of hair.

One day Europa was dallying by the water’s edge. She spotted a regal looking bull grazing amongst her father's herd. Europa neared the beast; it knelt down in front of her and permitted the young woman to mount him.

When Europa climbed up on its back, the bull leapt to its feet and step by step drifted nearer to the sea.

Once it got to the beach the bull hit the water, by this time is was too late for Europa to climb off. The bull took off with her to the isle of Crete.

When the bull and Europa got to Crete, Zeus switched himself back into his own form.

Zeus seduced the beautiful Europa and made her his mistress, making it known to her that all the land as far as she could see now belonged to her. This country became known as the Continent of Europe.

We have 1262 guests and no members online