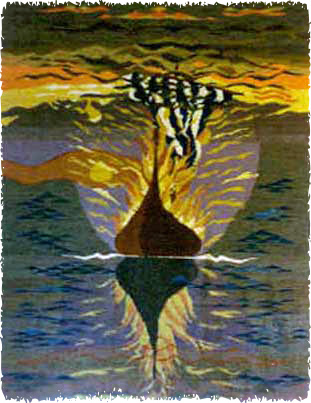 Baldur the Good, having been tormented with terrible dreams indicating that his life was in peril, told them to the assembled gods, who resolved to conjure all things to avert from him the threatened danger. Then Frigga, the wife of Odin, exacted an oath from fire and water, from iron and all other metals, from stones, trees, diseases, beasts, birds, poisons, and creeping things, that none of them would do any harm to Baldur. Odin, not satisfied with all this, and feeling alarmed for the fate of his son, determined to consult the prophetess Angerbode, a giantess, mother of Fenris, Hela, and the Midgard serpent. She was dead, and Odin was forced to seek her in Hela's dominions.

This Descent of Odin forms the subject of Gray's fine ode beginning,--

"Uprose the king of men with speed

And saddled straight his coal-black steed"

But the other gods, feeling that what Frigga had done was quite sufficient, amused themselves with using Baldur as a mark, some hurling darts at him, some stones, while others hewed at him with their swords and battle-axes; for do what they would, none of them could harm him. And this became a favorite pastime with them and was regarded as an honor shown to Baldur. But when Loki beheld the scene he was sorely vexed that Baldur was not hurt. Assuming, therefore, the shape of a woman, he went to Fensalir, the man-sion of Frigga. That goddess, when she saw the pretended woman, inquired of her if she knew what the gods were doing at their meetings. She replied that they were throwing darts and stones at Baldur, without being able to hurt him. "Ay," said Frigga, "neither stones, nor sticks, nor anything else can hurt Baldur, for I have exacted an oath from all of them." "What," exclaimed the woman, "have all things sworn to spare Baldur?" "All things," replied Frigga, "except one little shrub that grows on the eastern side of Valhalla, and is called Mistletoe, and which I thought too young and feeble to crave an oath from." 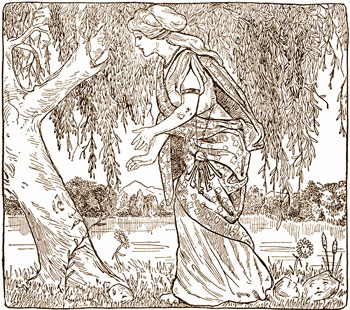 As soon as Loki heard this he went away, and resuming his natural shape, cut off the mistletoe, and repaired to the place where the gods were assembled. There he found Hodur standing apart, without partaking of the sports, on account of his blindness, and going up to him, said, "Why dost thou not also throw something at Baldur?"

"Because I am blind," answered Hodur, "and see not where Baldur is, and have, moreover, nothing to throw."

"Come, then," said Loki, "do like the rest, and show honor to Baldur by throwing this twig at him, and I will direct thy arm towards the place where he stands."

Hodur then took the mistletoe, and under the guidance of Loki, darted it at Baldur, who, pierced through and through, fell down lifeless. Surely never was there witnessed, either among gods or men, a more atrocious deed than this. When Baldur fell, the gods were struck speechless with horror, and then they looked at each other, and all were of one mind to lay hands on him who had done the deed, but they were obliged to delay their vengeance out of respect for the sacred place where they were assembled. They gave vent to their grief by loud lamentations. When the gods came to themselves, Frigga asked who among them wished to gain all her love and good will. "For this," said she, "shall he have who will ride to Hel and offer Hela a ransom if she will let Baldur return to Asgard." Whereupon Hermod, surnamed the Nimble, the son of Odin, offered to undertake the journey. Odin's horse, Sleipnir, which has eight legs and can outrun the wind, was then led forth, on which Hermod mounted and galloped away on his mission. For the space of nine days and as many nights he rode through deep glens so dark that he could not discern anything, until he arrived at the river Gyoll, which he passed over on a bridge covered with glittering gold. The maiden who kept the bridge asked him his name and lineage, telling him that the day before five bands of dead persons had ridden over the bridge, and did not shake it as much as he alone. "But," she added, "thou hast not death's hue on thee; why then ridest thou here on the way to Hel?" 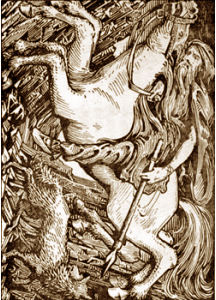 "I ride to Hel," answered Hermod, "to seek Baldur. Hast thou perchance seen him pass this way?"

She replied, "Baldur hath ridden over Gyoll's bridge, and yonder lieth the way he took to the abodes of death"

Hermod pursued his journey until he came to the barred gates of Hel. Here he alighted, girthed his saddle tighter, and remounting clapped both spurs to his horse, who cleared the gate by a tremendous leap without touching it. Hermod then rode on to the palace, where he found his brother Baldur occupying the most distinguished seat in the hall, and passed the night in his company. The next morning he besought Hela to let Baldur ride home with him, assuring her that nothing but lamentations were to be heard among the gods. Hela answered that it should now be tried whether Baldur was so beloved as he was said to be. "If, therefore," she added, "all things in the world, both living and lifeless, weep for him, then shall he return to life; but if any one thing speak against him or refuse to weep, he shall be kept in Hel."

Hermod then rode back to Asgard and gave an account of all he had heard and witnessed.

The gods upon this despatched messengers throughout the world to beg everything to weep in order that Baldur might be delivered from Hel. All things very willingly complied with this request, both men and every other living being, as well as earths, and stones, and trees, and metals, just as we have all seen these things weep when they are brought from a cold place into a hot one. As the messengers were returning, they found an old hag named Thaukt sitting in a cavern, and begged her to weep Baldur out of Hel. But she answered,

Let Hela keep her own."

It was strongly suspected that this hag was no other than Loki himself, who never ceased to work evil among gods and men. So Baldur was prevented from coming back to Asgard.

[Footnote: In Longfellow's Poems will be found a poem entitled "Tegner's Drapa," upon the subject of Baldur's death.]

The gods took up the dead body and bore it to the seashore where stood Baldur's ship "Hringham," which passed for the largest in the world. Baldur's dead body was put on the funeral pile, on board the ship, and his wife Nanna was so struck with grief at the sight that she broke her heart, and her body was burned on the same pile as her husband's. There was a vast concourse of various kinds of people at Baldur's obsequies. First came Odin accompanied by Frigga, the Valkyrie, and his ravens; then Frey in his car drawn by Gullinbursti, the boar; Heimdall rode his horse Gulltopp, and Freya drove in her chariot drawn by cats. There were also a great many Frost giants and giants of the mountain present. Baldur's horse was led to the pile fully caparisoned and consumed in the same flames with his master.

But Loki did not escape his deserved punishment. When he saw how angry the gods were, he fled to the mountain, and there built himself a hut with four doors, so that he could see every approaching danger. He invented a net to catch the fishes, such as fishermen have used since his time. But Odin found out his hiding-place and the gods assembled to take him. He, seeing this, changed himself into a salmon, and lay hid among the stones of the brook. But the gods took his net and dragged the brook, and Loki, finding he must be caught, tried to leap over the net; but Thor caught him by the tail and compressed it, so that salmons ever since have had that part remarkably fine and thin. They bound him with chains and suspended a serpent over his head, whose venom falls upon his face drop by drop. His wife Siguna sits by his side and catches the drops as they fall, in a cup; but when she carries it away to empty it, the venom falls upon Loki, which makes him howl with horror, and twist his body about so violently that the whole earth shakes, and this produces what men call earthquakes. 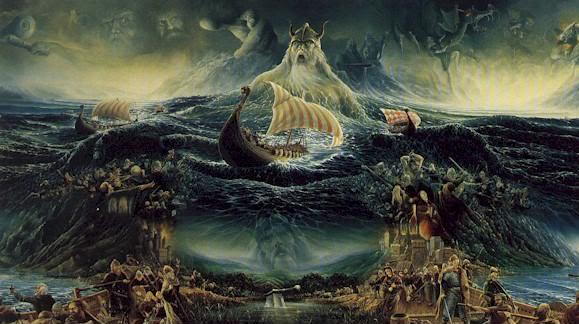